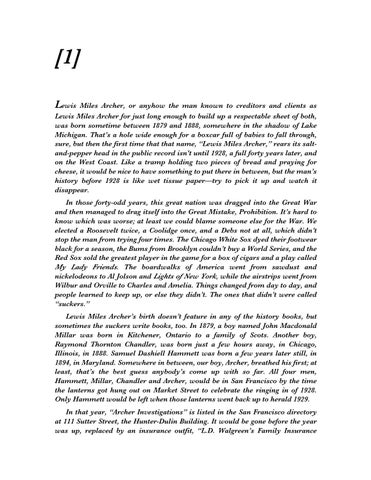 Miles Archer, or anyhow the man known to creditors and clients as Lewis Miles Archer for just long enough to build up a respectable sheet of both, was born sometime between 1879 and 1888, somewhere in the shadow of Lake Michigan. That’s a hole wide enough for a boxcar full of babies to fall through, sure, but then the first time that that name, “Lewis Miles Archer,” rears its saltand-pepper head in the public record isn't until 1928, a full forty years later, and on the West Coast. Like a tramp holding two pieces of bread and praying for cheese, it would be nice to have something to put there in between, but the man’s history before 1928 is like wet tissue paper—try to pick it up and watch it disappear. In those forty-odd years, this great nation was dragged into the Great War and then managed to drag itself into the Great Mistake, Prohibition. It’s hard to know which was worse; at least we could blame someone else for the War. We elected a Roosevelt twice, a Coolidge once, and a Debs not at all, which didn’t stop the man from trying four times. The Chicago White Sox dyed their footwear black for a season, the Bums from Brooklyn couldn’t buy a World Series, and the Red Sox sold the greatest player in the game for a box of cigars and a play called My Lady Friends. The boardwalks of America went from sawdust and nickelodeons to Al Jolson and Lights of New York, while the airstrips went from Wilbur and Orville to Charles and Amelia. Things changed from day to day, and people learned to keep up, or else they didn’t. The ones that didn’t were called “suckers.” Lewis Miles Archer’s birth doesn’t feature in any of the history books, but sometimes the suckers write books, too. In 1879, a boy named John Macdonald Millar was born in Kitchener, Ontario to a family of Scots. Another boy, Raymond Thornton Chandler, was born just a few hours away, in Chicago, Illinois, in 1888. Samuel Dashiell Hammett was born a few years later still, in 1894, in Maryland. Somewhere in between, our boy, Archer, breathed his first; at least, that’s the best guess anybody’s come up with so far. All four men, Hammett, Millar, Chandler and Archer, would be in San Francisco by the time the lanterns got hung out on Market Street to celebrate the ringing in of 1928. Only Hammett would be left when those lanterns went back up to herald 1929. In that year, “Archer Investigations” is listed in the San Francisco directory at 111 Sutter Street, the Hunter-Dulin Building. It would be gone before the year was up, replaced by an insurance outfit, “L.D. Walgreen’s Family Insurance