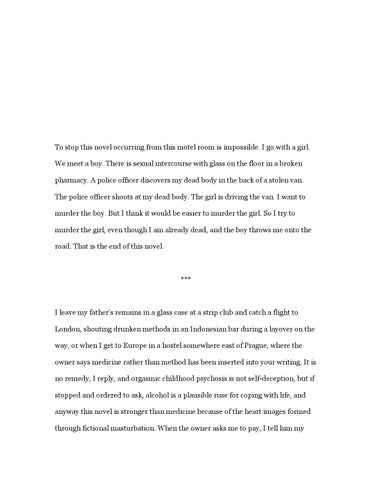 To stop this novel occurring from this motel room is impossible. I go with a girl. We meet a boy. There is sexual intercourse with glass on the floor in a broken pharmacy. A police officer discovers my dead body in the back of a stolen van. The police officer shoots at my dead body. The girl is driving the van. I want to murder the boy. But I think it would be easier to murder the girl. So I try to murder the girl, even though I am already dead, and the boy throws me onto the road. That is the end of this novel.

I leave my fatherâ&#x20AC;&#x2122;s remains in a glass case at a strip club and catch a flight to London, shouting drunken methods in an Indonesian bar during a layover on the way, or when I get to Europe in a hostel somewhere east of Prague, where the owner says medicine rather than method has been inserted into your writing. It is no remedy, I reply, and orgasmic childhood psychosis is not self-deception, but if stopped and ordered to ask, alcohol is a plausible ruse for coping with life, and anyway this novel is stronger than medicine because of the heart images formed through fictional masturbation. When the owner asks me to pay, I tell him my