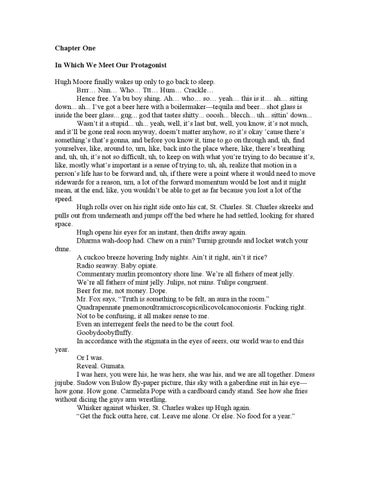 Chapter One In Which We Meet Our Protagonist Hugh Moore finally wakes up only to go back to sleep. Brrr… Nnn… Who… Ttt… Hum… Crackle… Hence free. Ya bu boy shing. Ah… who… so… yeah… this is it… ah… sitting down... ah... I’ve got a beer here with a boilermaker—tequila and beer... shot glass is inside the beer glass... gug... god that tastes shitty... ooosh... blecch... uh... sittin’ down... Wasn’t it a stupid... uh... yeah, well, it’s last but, well, you know, it’s not much, and it’ll be gone real soon anyway, doesn’t matter anyhow, so it’s okay ’cause there’s something’s that’s gonna, and before you know it, time to go on through and, uh, find yourselves, like, around to, urn, like, back into the place where, like, there’s breathing and, uh, uh, it’s not so difficult, uh, to keep on with what you’re trying to do because it’s, like, mostly what’s important is a sense of trying to, uh, ah, realize that motion in a person’s life has to be forward and, uh, if there were a point where it would need to move sidewards for a reason, urn, a lot of the forward momentum would be lost and it might mean, at the end, like, you wouldn’t be able to get as far because you lost a lot of the speed. Hugh rolls over on his right side onto his cat, St. Charles. St. Charles skreeks and pulls out from underneath and jumps off the bed where he had settled, looking for shared space. Hugh opens his eyes for an instant, then drifts away again. Dharma wah-doop had. Chew on a ruin? Turnip grounds and locket watch your dune. A cuckoo breeze hovering Indy nights. Ain’t it right, ain’t it rice? Radio seaway. Baby opiate. Commentary marlin promontory shore line. We’re all fishers of meat jelly. We’re all fathers of mint jelly. Julips, not ruins. Tulips congruent. Beer for me, not money. Dope. Mr. Fox says, “Truth is something to be felt, an aura in the room.” Quadrapennate pnemonoultramicroscopicsilicovolcanoconiosis. Fucking right. Not to be confusing, it all makes sense to me. Even an interregent feels the need to be the court fool. Goobydoobyfluffy. In accordance with the stigmata in the eyes of seers, our world was to end this year. Or I was. Reveal. Gumata. I was hers, you were his, he was hers, she was his, and we are all together. Dmess jujube. Sudow von Bulow fly-paper picture, this sky with a gaberdine suit in his eye— how gone. How gone. Carmelita Pope with a cardboard candy stand. See how she fries without dicing the guys arm wrestling. Whisker against whisker, St. Charles wakes up Hugh again. “Get the fuck outta here, cat. Leave me alone. Or else. No food for a year.”