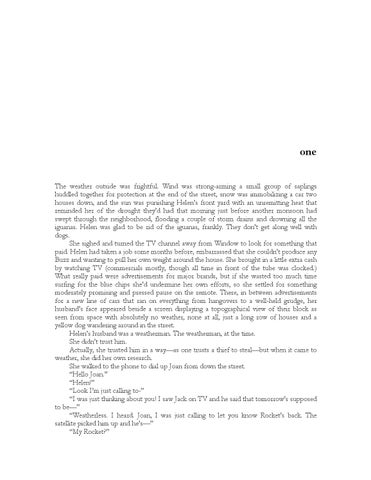 one The weather outside was frightful. Wind was strong-arming a small group of saplings huddled together for protection at the end of the street, snow was immobilizing a car two houses down, and the sun was punishing Helen’s front yard with an unremitting heat that reminded her of the drought they’d had that morning just before another monsoon had swept through the neighborhood, flooding a couple of storm drains and drowning all the iguanas. Helen was glad to be rid of the iguanas, frankly. They don’t get along well with dogs. She sighed and turned the TV channel away from Window to look for something that paid. Helen had taken a job some months before, embarrassed that she couldn’t produce any Buzz and wanting to pull her own weight around the house. She brought in a little extra cash by watching TV (commercials mostly, though all time in front of the tube was clocked.) What really paid were advertisements for major brands, but if she wasted too much time surfing for the blue chips she’d undermine her own efforts, so she settled for something moderately promising and pressed pause on the remote. There, in between advertisements for a new line of cars that ran on everything from hangovers to a well-held grudge, her husband’s face appeared beside a screen displaying a topographical view of their block as seen from space with absolutely no weather, none at all, just a long row of houses and a yellow dog wandering around in the street. Helen’s husband was a weatherman. The weatherman, at the time. She didn’t trust him. Actually, she trusted him in a way—as one trusts a thief to steal—but when it came to weather, she did her own research. She walked to the phone to dial up Joan from down the street. “Hello Joan.” “Helen!” “Look I’m just calling to-” “I was just thinking about you! I saw Jack on TV and he said that tomorrow’s supposed to be—” “Weatherless. I heard. Joan, I was just calling to let you know Rocket’s back. The satellite picked him up and he’s—” “My Rocket?”