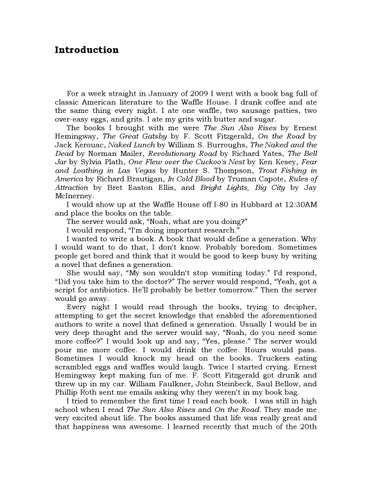 For a week straight in January of 2009 I went with a book bag full of classic American literature to the Waffle House. I drank coffee and ate the same thing every night. I ate one waffle, two sausage patties, two over-easy eggs, and grits. I ate my grits with butter and sugar. The books I brought with me were The Sun Also Rises by Ernest Hemingway, The Great Gatsby by F. Scott Fitzgerald, On the Road by Jack Kerouac, Naked Lunch by William S. Burroughs, The Naked and the Dead by Norman Mailer, Revolutionary Road by Richard Yates, The Bell Jar by Sylvia Plath, One Flew over the Cuckoo's Nest by Ken Kesey, Fear and Loathing in Las Vegas by Hunter S. Thompson, Trout Fishing in America by Richard Brautigan, In Cold Blood by Truman Capote, Rules of Attraction by Bret Easton Ellis, and Bright Lights, Big City by Jay McInerney. I would show up at the Waffle House off I-80 in Hubbard at 12:30AM and place the books on the table. The server would ask, “Noah, what are you doing?” I would respond, “I'm doing important research.” I wanted to write a book. A book that would define a generation. Why I would want to do that, I don't know. Probably boredom. Sometimes people get bored and think that it would be good to keep busy by writing a novel that defines a generation. She would say, “My son wouldn't stop vomiting today.” I'd respond, “Did you take him to the doctor?” The server would respond, “Yeah, got a script for antibiotics. He’ll probably be better tomorrow.” Then the server would go away. Every night I would read through the books, trying to decipher, attempting to get the secret knowledge that enabled the aforementioned authors to write a novel that defined a generation. Usually I would be in very deep thought and the server would say, “Noah, do you need some more coffee?” I would look up and say, “Yes, please.” The server would pour me more coffee. I would drink the coffee. Hours would pass. Sometimes I would knock my head on the books. Truckers eating scrambled eggs and waffles would laugh. Twice I started crying. Ernest Hemingway kept making fun of me. F. Scott Fitzgerald got drunk and threw up in my car. William Faulkner, John Steinbeck, Saul Bellow, and Phillip Roth sent me emails asking why they weren't in my book bag. I tried to remember the first time I read each book. I was still in high school when I read The Sun Also Rises and On the Road. They made me very excited about life. The books assumed that life was really great and that happiness was awesome. I learned recently that much of the 20th