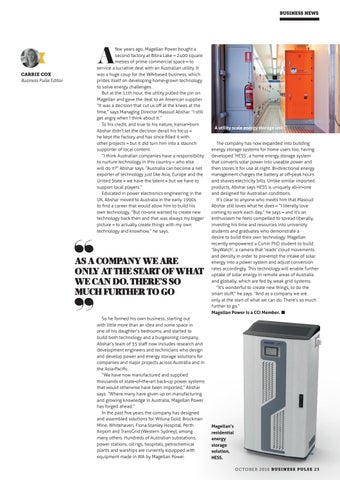 few years ago, Magellan Power bought a second factory at Bibra Lake – 2400 square metres of prime commercial space – to service a lucrative deal with an Australian utility. It was a huge coup for the WA-based business, which prides itself on developing home-grown technology to solve energy challenges. But at the 11th hour, the utility pulled the pin on Magellan and gave the deal to an American supplier. “It was a decision that cut us off at the knees at the time,” says Managing Director Masoud Abshar. “I still get angry when I think about it.” To his credit, and true to his nature, Iranian-born Abshar didn’t let the decision derail his focus – he kept the factory and has since filled it with other projects – but it did turn him into a staunch supporter of local content. “I think Australian companies have a responsibility to nurture technology in this country – who else will do it?” Abshar says. “Australia can become a net exporter of technology just like Asia, Europe and the United State – we have the talent – but we have to support local players.” Educated in power electronics engineering in the UK, Abshar moved to Australia in the early 1990s to find a career that would allow him to build his own technology. “But no-one wanted to create new technology back then and that was always my bigger picture – to actually create things with my own technology and knowhow,” he says.

AS A COMPANY WE ARE ONLY AT THE START OF WHAT WE CAN DO. THERE’S SO MUCH FURTHER TO GO So he formed his own business, starting out with little more than an idea and some space in one of his daughter’s bedrooms, and started to build both technology and a burgeoning company. Abshar’s team of 35 staff now includes research and development engineers and technicians who design and develop power and energy storage solutions for companies and major projects across Australia and in the Asia-Pacific. “We have now manufactured and supplied thousands of state-of-the-art back-up power systems that would otherwise have been imported,” Abshar says. “Where many have given up on manufacturing and growing knowledge in Australia, Magellan Power has forged ahead.” In the past five years the company has designed and assembled solutions for Wiluna Gold, Brockman Mine, Whitehaven, Fiona Stanley Hospital, Perth Airport and TransGrid (Western Sydney), among many others. Hundreds of Australian substations, power stations, oil rigs, hospitals, petrochemical plants and warships are currently equipped with equipment made in WA by Magellan Power.

The company has now expanded into building energy storage systems for home users too, having developed ‘HESS’, a home energy storage system that converts solar power into useable power and then stores it for use at night. Bi-directional energy management charges the battery at off-peak hours and shaves electricity bills. Unlike similar imported products, Abshar says HESS is uniquely all-in-one and designed for Australian conditions. It’s clear to anyone who meets him that Masoud Abshar still loves what he does – “I literally love coming to work each day,” he says – and it’s an enthusiasm he feels compelled to spread liberally, investing his time and resources into university students and graduates who demonstrate a desire to build their own technology. Magellan recently empowered a Curtin PhD student to build ‘SkyWatch’, a camera that ‘reads’ cloud movements and density in order to pre-empt the intake of solar energy into a power system and adjust conversion rates accordingly. This technology will enable further uptake of solar energy in remote areas of Australia and globally, which are fed by weak grid systems. “It’s wonderful to create new things, to do the smart stuff,” he says. “And as a company we are only at the start of what we can do. There’s so much further to go.” Magellan Power is a CCI Member. ¢ Safe and Secure is the theme for this BP, appropriately so as October is National Safe Work Month. Is your data safe? How critical is the de...

Safe and Secure is the theme for this BP, appropriately so as October is National Safe Work Month. Is your data safe? How critical is the de...