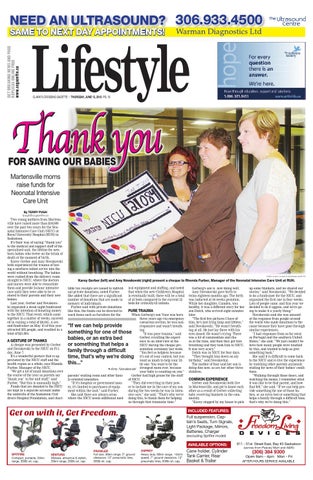 SAME TO NEXT DAY APPOINTMENTS!

Two young mothers from Martensville have raised more than $30,000 over the past two years for the Neonatal Intensive Care Unit (NICU) at Royal University Hospital (RUH) in Saskatoon. It’s their way of saying “thank you” to the medical and support staff of the specialized unit, the lifeline for newborn babies who teeter on the brink of death at the moment of birth. Karey Gerber and Amy Novakovski both experienced the trauma of having a newborn infant arrive into the world without breathing. The babies were rushed from the delivery room straight to NICU, where the doctors and nurses were able to resuscitate them and provide 24-hour intensive care until they were able to be restored to their parents and their new homes. Last year, Gerber and Novakovski organized a steak night fundraiser with the intention of donating money to the NICU. That event, which came together in a matter of weeks, succeeded in raising a total of $8,845. A second fundraiser on May 10 of this year attracted 285 people, and resulted in a total of $21,084.

A GESTURE OF THANKS

A cheque was presented by Gerber and Novakovski to the NICU on Friday, June 7. It’s a wonderful gesture that is appreciated by the NICU staff and the health region as a whole, says Rhonda Furber, Manager of the NICU. “We get a lot of small donations over the course of the year as parents say ‘thank you’ to the unit staff,” said Furber. “But this is unusually high.” Funds that are donated to the NICU are kept in a separate account under the umbrella of the Saskatoon Children’s Hospital Foundation, and chari-

Karey Gerber (left) and Amy Novakovski (right) present a cheque to Rhonda Furber, Manager of the Neonatal Intensive Care Unit at RUH. table tax receipts are issued to individual private donations, noted Furber. She added that there are a significant number of donations that are made in memory of individuals. Furber said with private donations like this, the funds can be directed toward items such as furniture for the

ical equipment and staffing, and noted that when the new Children’s Hospital is eventually built, there will be a total of 43 beds compared to the current 32 beds for critically-ill infants.

When Gerberg’s son Vanz was born three years ago via emergency caesarean section, he was nonresponsive and wasn’t breath“If we can help provide something for one of those ing. “It was pure trauma,” said Gerber, recalling the experibabies, or an extra bed ence in an interview at the or something that helps a NICU during the cheque presentation ceremony last week. family through a difficult “You feel so helpless because time, that’s why we’re doing it’s out of your control, but you want so much to help your litthis...” tle one. You want to be the • Amy Novakovski strongest mom ever, because your baby is counting on you.” parents’ waiting room and other fami- Gerber had high praise for the staff ly-oriented amenities. of NICU. “If it’s hospital or government mon “They did everyting in their powey, it’s limited to purchases of equiper to include me in the care of my son ment within the unit,” said Furber. during the two weeks he was in inten She said there are always areas sive care,” she said. “That’s why we’re where the NICU needs additional med- doing this, to thank them for helping us through that traumatic time.”

Get on with it, Get Freedom.

Gerberg’s son is now doing well. Amy Novakovski gave birth to twins eighteen months ago. The birth was inducted at 36 weeks gestation. While her daughter, Camden, was healthy, it was a different story for her son Dutch, who arrived eight minutes later. “The first few pictures I have of him, he’s just lying limp and lifeless,” said Novakovski. “He wasn’t breathing at all. He just lay there with his eyes closed. He wasn’t crying. There was a lot of commontion and chaos at the time, and then they got him breathing and they took him to NICU. It was very scary.” Dutch was in NICU for four days. “They brought him down on my birthday,” said Novakovksi. The mother of four said her son is doing fine now, as are her other three children.

Gerber and Novakovski both live in Martensville, and got to know each other as a result of Gerber collecting baby receiving blankets in the community. “Karey stopped by my house to pick

up some blankets, and we shared our stories,” said Novakovski. “We decided to do a fundraiser for the NICU, and organized the first one in four weeks. Lots of people came, and this year we decided to do it aggain, and we’re going to make it a yearly thing.” Novakovski said she was amazed at the response from people around the world who made donations to the cause because they have gone through similar experiences. “I had responses from as far away as Portugal and the southern United States,” she said. “We just couldn’t believe how many people were touched by this, and wanted to help us give something back.” She said it is difficult to come back to the NICU and re-live the experience by watching other parents anxiously waiting for news of their babies’ conditions. “Walking through those doors, and watching the moms, I remember what it was like to be that parent, and how that felt,” she said. “If we can help provide something for one of those babies, or an extra bed or something that helps a family through a difficult time, that’s why we’re doing this.”

(across from Peavey Mart and A&W)