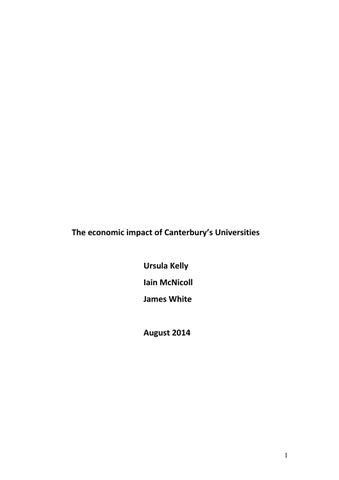 The economic impact of Canterburyâ&amp;#x20AC;&amp;#x2122;s Universities

In the UK and internationally, universities are increasingly being recognised as a core part of the national and regional economic infrastructure, generating employment and output, attracting export earnings and contributing to GDP. There is also a growing awareness among policy makers, at local, regional and national level,of the potential for higher education to contribute to economic recovery through innovation, increased exploitation of research and better knowledge transfer from a university to wider society.

The economic importance of higher education institutions can be particularly visible in the regional economy. Universities are clearly important for the educational opportunities they provide. They directly help to increase the skills base of a region, with the knowledge and skills of university graduates contributing to the creation of a more flexible and adaptable workforce, which is important in enhancing a regionâ&amp;#x20AC;&amp;#x2122;s economic competiveness.

However universities are also vitally important to a region in themselves, as large businesses operating in the region. They make a very tangible contribution to the regional economy as large employers as well as generating a significant impact on the region through their expenditure and that of their staff and students. This can be especially important in the regional economy during times of recession. Universities tend to be counter-cyclical which helps provide some economic stability â&amp;#x20AC;&amp;#x201C; where Universities may not grow as fast as other businesses during a boom time, neither do they contract as much during a down turn.

The Universities of Kent and Canterbury Christ Church are good examples of Universities being of considerable importance to the economy. They are two major higher education institutions with a combined turnover of over ÂŁ323.2 million, employing over 4,500 staff and with over 37,800 students registered in 2012/13. Both have their main campus in Canterbury, but also operate over a number of sites in Kent and Medway (with the University of Kent also having a presence in Brussels and in Paris.) As major businesses in the South East of England they have a significant impact on the Canterbury district and across all of Kent and Medway.

A table of results for the two Universities combined can be seen in Appendix One. For more detailed analysis of each university, including sub-regional analysis of the distribution of impact across their campuses, please see the individual University reports.

The Universities of Kent and Canterbury Christ Church had combined revenue of £323.2 million in 2012/13.

It should be noted that while the two Universities receive funding and business from the UK public sector, this does not make them public sector organisations. They are private, autonomous institutions operating in the ‘not-for-profit sector’. (Both Universities are registered charities, with CCCU being a Church of England Foundation.)

Indeed, since the previous study (relating to 2009/10) the Universities’ reliance on public funding has reduced significantly. Their income profile has changed noticeably, largely due to the changes in higher education funding in England in the intervening period. Following the Browne Review of higher education ( 2010), the direct teaching grant supporting undergraduate education in English Universities was reduced with individual students now responsible for a larger proportion ( in some case all) of their tuition fees. 4

Funding Council grants now only make up 25% of the two Universities’ income, compared to 40% previously. The proportion of private income (including fee payments from individual students) has risen from 30% of income three years ago to 40%. International income has also risen from 14% to 19%. Overall the Universities now have a majority of their funding from non-public sources with 59% of their revenue coming from the private sector and overseas. The Universities’ combined direct export earnings amounted to £62.3 million.

Together the Universities directly provided 4563 full-time-equivalent jobs. This makes them among the biggest employers in the area – the university employment

is equivalent to nearly 8% of all employee jobs in Canterbury.6 They employed staff in a wide range of jobs and across a broad spectrum of skill and qualification levels.

Expenditure The Universities’ expenditure, together with that of their staff and students generated additional jobs in other industries throughout the region. The total economic impact on the region was significant.

The Universities had over 37,800 students registered in 2012/13. As well as contributing to a vibrant and diverse local culture, students are a major source of business not only for the universities but for the host economy. Students spend

NOMIS Labour Market Report for Canterbury 2012. There were 58,500 employee jobs in Canterbury in 2012 (excluding self-employed, government-supported trainees and HM Forces.) 7 As non-profit organisations, universities typically spend about the same every year as their income in that year. In the study year both universities generated operating surpluses for future reinvestment in the institutions.

money outside the university, on accommodation, food, clothing, entertainment , travel and a range of other consumer goods and services. 

The expenditure of local (South East domiciled) students was also significant and represents monies retained within the local area (rather than being lost to the region if the students were to study elsewhere.) The 17,122 local students spent an estimated £206 million off-campus, generating over £255 million of output in South East industries and around 2221 local jobs.

Overall the two Universities’ activities, including the student off-campus expenditure, generated over £1.25 billion of output and nearly 13,200 jobs in the South East region. 13,200 jobs was equivalent to nearly 0.3 % of the workforce in employment across the entire South East in 2010. 8

Contribution to Regional GVA The Universities’ direct GVA amounted to £217.9 million. Through knock-on effects they generated a further £180.6 million GVA in other South East industries.

The additional impact of student expenditure generated a further £264.4 million regional GVA, bring the total contribution of Regional GVA of the two Universities and their students to £662.9 million. This was equivalent to 0.33% of all South East Region GVA in 2012.9

This summary highlights the combined impact of the two Canterbury Universities, Canterbury Christ Church University and the University of Kent, and shows them to

be a significant economic force within Kent, Medway and the entire South East region. 

They are important employers in Canterbury and the wider Kent and Medway area, providing 4563 FTE jobs directly in the Universities; the direct jobs provided together with the additional 8621 jobs generated through knock on effects by the expenditure of the Universities, their staff and students makes them a vitally important part of the local economy. 13,184 jobs was equivalent to 22% of employee jobs in Canterbury in 2012.10

Their wide ranging staffing profile reflects the multi-faceted nature of university activity. Both universities have significant estates to maintain, with campuses spread across a number of sites. Their estates include not only laboratories, lecture theatres and offices but also residential accommodation, catering, sports, recreational and cultural facilities. The universities employ many staff across the spectrum of skills and qualification levels and directly create many quality job opportunities for local residents.

Analysis of the universities’ revenue by source also reflects their diverse portfolios. A well as attracting income to support teaching and research, the two universities earned income from consultancy and related knowledge transfer activity as well as from conferences and other related business.

The importance of international higher education business and Universities’ contribution to the balance of trade is not always recognised. In the case of the University of Kent and Canterbury Christ Church, their international business activity is substantial.

The Universities’ own international revenue of £62.3 million, together with the estimated off- campus expenditure of international students (a further £72 million) indicates that the two Universities were together responsible for generating £134.3 million of export earnings.

In summary, this study of the two universities has shown them to make a substantial contribution to the economy of the South East of England and to be of core economic importance to Canterbury and the wider Kent and Medway areas.

Of Which Accruing to the Region

Of Which Accruin g to the Region

Combined Impact of the University of Kent &amp; Canterbury Christ Church University and their students: Contribution to Regional GVA ( ÂŁm)

The studies also examined the impact of the off-campus expenditure of international students who were studying at the universities in that year.11 It also analysed the additional injection into the regional economy of the expenditure of students from the rest of the UK (i.e from outside the South East region.) A further analysis was undertaken of the impact of off-campus expenditure of local (i.e. those domiciled within the South East region) students, as the Universities may have retained them, and their expenditure, in the region rather than them leaving to study elsewhere. The South East Region is defined as that corresponding to the former Government Office Region.

The study utilised a two-stage approach to the estimation of the economic impact of the universities. The impact of each University on the UK economy was modelled, using a purpose-designed economic model of the UK. Analysis was then undertaken, using a Location Quotient approach, to estimate the share of the institutional impact on the UK likely to have accrued to the South East region.

The UK model used was a ‘Type II’ input-output model based on actual UK data derived from the UK Input-Output Tables (Office of National Statistics) together with Labour Force Survey and Annual Business Inquiry data and the 2008 UK Bluebook. The modelling system has been updated in 2013 to reflect productivity increases and related economic changes. Additional data sources include the Producers’ Prices Index, ONS Regional Accounts and Local Area Data from the ONS including the Business Register and Employment Survey and other regional labour market data from nomisweb.co.uk. The core modelling system is based on SIC 2003 classifications and this has been used for the 1 digit aggregate presentation of results. The modelling system used was purpose-designed for UK higher education institutions and is the

In this context ‘International students’ refers to all students whose permanent domicile is recorded as outside the UK, including other parts of the EU as well as non EU students.

Other data sources and issues arising The main source of higher education data is the Higher Education Statistics Agency (HESA) publications on HE Finance, staffing and students. These do not however completely disaggregate HEI revenue sources (for instance they do not separately identify EU student fees paid from domestic HE student fees paid.) Hence there needs to be additional analysis to estimate overall proportions of income from public, private and international sources. In this study estimates were made of the EU student fee component of institutional international earnings on the basis of the average fee paid by the UK and EU student group in each region. Where data was not available in HESA, estimates were made of the pattern of public/private/international split of income based on tacit knowledge and observations from previous detailed studies of the income sources of individual universities (making the assumption that the broad pattern of other income sources, e.g. for Residence and Catering, is likely to be similar for most institutions. ) Estimates of student expenditure were made drawing on the most recent BIS Student Income and Expenditure survey (for domestic students) as well as BIS estimates of international student expenditure.

A new report confirms the importance of the universities of Kent and Canterbury Christ Church (CCCU) to the economies of Canterbury, Medway and Kent. Amongst the key findings, the report, which covers the academic and financial year 2012/13, shows that overall the two universities’ activities, including student off-campus expenditure, generated over £1.25 billion of output and nearly 13,200 jobs in the South East region.