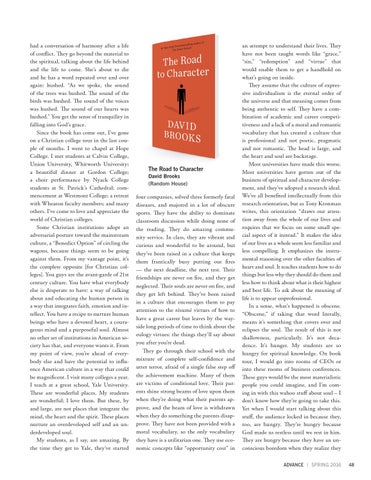 had a conversation of harmony after a life of conflict. They go beyond the material to the spiritual, talking about the life behind and the life to come. She’s about to die and he has a word repeated over and over again: hushed. “As we spoke, the sound of the trees was hushed. The sound of the birds was hushed. The sound of the voices was hushed. The sound of our hearts was hushed.” You get the sense of tranquility in falling into God’s grace. Since the book has come out, I’ve gone on a Christian college tour in the last couple of months. I went to chapel at Hope College. I met students at Calvin College, Union University, Whitworth University; a beautiful dinner at Gordon College; a choir performance by Nyack College students at St. Patrick’s Cathedral; commencement at Westmont College; a retreat with Wheaton faculty members; and many others. I’ve come to love and appreciate the world of Christian colleges. Some Christian institutions adopt an adversarial posture toward the mainstream culture, a “Benedict Option” of circling the wagons, because things seem to be going against them. From my vantage point, it’s the complete opposite [for Christian colleges]. You guys are the avant-garde of 21st century culture. You have what everybody else is desperate to have: a way of talking about and educating the human person in a way that integrates faith, emotion and intellect. You have a recipe to nurture human beings who have a devoted heart, a courageous mind and a purposeful soul. Almost no other set of institutions in American society has that, and everyone wants it. From my point of view, you’re ahead of everybody else and have the potential to influence American culture in a way that could be magnificent. I visit many colleges a year. I teach at a great school, Yale University. These are wonderful places. My students are wonderful; I love them. But these, by and large, are not places that integrate the mind, the heart and the spirit. These places nurture an overdeveloped self and an underdeveloped soul. My students, as I say, are amazing. By the time they get to Yale, they’ve started

four companies, solved three formerly fatal diseases, and majored in a lot of obscure sports. They have the ability to dominate classroom discussion while doing none of the reading. They do amazing community service. In class, they are vibrant and curious and wonderful to be around, but they’ve been raised in a culture that keeps them frantically busy putting out fires — the next deadline, the next test. Their friendships are never on fire, and they get neglected. Their souls are never on fire, and they get left behind. They’ve been raised in a culture that encourages them to pay attention to the résumé virtues of how to have a great career but leaves by the wayside long periods of time to think about the eulogy virtues: the things they’ll say about you after you’re dead. They go through their school with the mixture of complete self-confidence and utter terror, afraid of a single false step off the achievement machine. Many of them are victims of conditional love. Their parents shine strong beams of love upon them when they’re doing what their parents approve, and the beam of love is withdrawn when they do something the parents disapprove. They have not been provided with a moral vocabulary, so the only vocabulary they have is a utilitarian one. They use economic concepts like “opportunity cost” in

an attempt to understand their lives. They have not been taught words like “grace,” “sin,” “redemption” and “virtue” that would enable them to get a handhold on what’s going on inside. They assume that the culture of expressive individualism is the eternal order of the universe and that meaning comes from being authentic to self. They have a combination of academic and career competitiveness and a lack of a moral and romantic vocabulary that has created a culture that is professional and not poetic, pragmatic and not romantic. The head is large, and the heart and soul are backstage. Most universities have made this worse. Most universities have gotten out of the business of spiritual and character development, and they’ve adopted a research ideal. We’ve all benefited intellectually from this research orientation, but as Tony Kronman writes, this orientation “draws our attention away from the whole of our lives and requires that we focus on some small special aspect of it instead.” It makes the idea of our lives as a whole seem less familiar and less compelling. It emphasizes the instrumental reasoning over the other faculties of heart and soul. It teaches students how to do things but less why they should do them and less how to think about what is their highest and best life. To ask about the meaning of life is to appear unprofessional. In a sense, what’s happened is obscene. “Obscene,” if taking that word literally, means it’s something that covers over and eclipses the soul. The result of this is not shallowness, particularly. It’s not decadence. It’s hunger. My students are so hungry for spiritual knowledge. On book tour, I would go into rooms of CEOs or into these rooms of business conferences. These guys would be the most materialistic people you could imagine, and I’m coming in with this wahoo stuff about soul – I don’t know how they’re going to take this. Yet when I would start talking about this stuff, the audience locked in because they, too, are hungry. They’re hungry because God made us restless until we rest in him. They are hungry because they have an unconscious boredom when they realize they ADVANCE | SPRING 2016 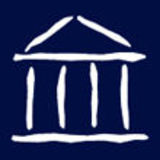