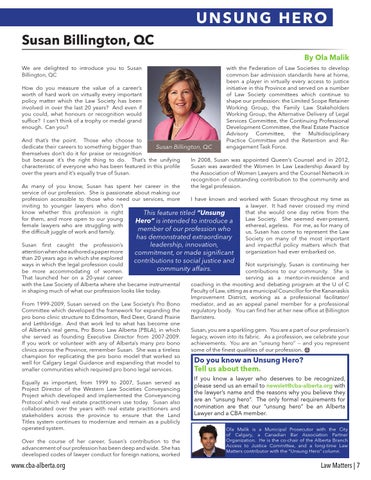 UNSUNG Hero Susan Billington, QC By ola Malik We are delighted to introduce you to Susan Billington, QC How do you measure the value of a career’s worth of hard work on virtually every important policy matter which the Law Society has been involved in over the last 20 years? And even if you could, what honours or recognition would suffice? I can’t think of a trophy or medal grand enough. Can you?

with the Federation of Law Societies to develop common bar admission standards here at home, been a player in virtually every access to justice initiative in this Province and served on a number of Law Society committees which continue to shape our profession: the Limited Scope Retainer Working Group, the Family Law Stakeholders Working Group, the Alternative Delivery of Legal Services Committee, the Continuing Professional Development Committee, the Real Estate Practice Advisory Committee, the Multidisciplinary Practice Committee and the Retention and Reengagement Task Force.

And that’s the point. Those who choose to dedicate their careers to something bigger than Susan Billington, QC themselves don’t do it for praise or recognition but because it’s the right thing to do. That’s the unifying In 2008, Susan was appointed Queen’s Counsel and in 2012, characteristic of everyone who has been featured in this profile Susan was awarded the Women In Law Leadership Award by over the years and it’s equally true of Susan. the Association of Women Lawyers and the Counsel Network in recognition of outstanding contribution to the community and As many of you know, Susan has spent her career in the the legal profession. service of our profession. She is passionate about making our profession accessible to those who need our services, more I have known and worked with Susan throughout my time as inviting to younger lawyers who don’t a lawyer. It had never crossed my mind know whether this profession is right that she would one day retire from the This feature titled “Unsung for them, and more open to our young Law Society. She seemed ever-present, Hero” is intended to introduce a female lawyers who are struggling with ethereal, ageless. For me, as for many of member of our profession who the difficult juggle of work and family. us, Susan has come to represent the Law has demonstrated extraordinary Society on many of the most important Susan first caught the profession’s and impactful policy matters which that leadership, innovation, attention when she authored a paper more organization had ever embarked on. commitment, or made significant than 20 years ago in which she explored contributions to social justice and ways in which the legal profession could Not surprisingly, Susan is continuing her community affairs. be more accommodating of women. contributions to our community. She is That launched her on a 20-year career serving as a mentor-in-residence and with the Law Society of Alberta where she became instrumental coaching in the mooting and debating program at the U of C in shaping much of what our profession looks like today. Faculty of Law, sitting as a municipal Councillor for the Kananaskis Improvement District, working as a professional facilitator/ From 1999-2009, Susan served on the Law Society’s Pro Bono mediator, and as an appeal panel member for a professional Committee which developed the framework for expanding the regulatory body. You can find her at her new office at Billington pro bono clinic structure to Edmonton, Red Deer, Grand Prairie Barristers. and Lethbridge. And that work led to what has become one of Alberta’s real gems, Pro Bono Law Alberta (PBLA), in which Susan, you are a sparkling gem. You are a part of our profession’s she served as founding Executive Director from 2007-2009. legacy, woven into its fabric. As a profession, we celebrate your If you work or volunteer with any of Alberta’s many pro bono achievements. You are an “unsung hero” -- and you represent clinics across the Province, remember Susan. She was a tireless some of the finest qualities of our profession. champion for replicating the pro bono model that worked so do you know an Unsung Hero? well for Calgary Legal Guidance and expanding that model to smaller communities which required pro bono legal services. tell us about them. Equally as important, from 1999 to 2007, Susan served as Project Director of the Western Law Societies Conveyancing Project which developed and implemented the Conveyancing Protocol which real estate practitioners use today. Susan also collaborated over the years with real estate practitioners and stakeholders across the province to ensure that the Land Titles system continues to modernize and remain as a publicly operated system. Over the course of her career, Susan’s contribution to the advancement of our profession has been deep and wide. She has developed codes of lawyer conduct for foreign nations, worked

If you know a lawyer who deserves to be recognized, please send us an email to newslet@cba-alberta.org with the lawyer’s name and the reasons why you believe they are an “unsung hero”. The only formal requirements for nomination are that our “unsung hero” be an Alberta Lawyer and a CBA member. Ola Malik is a Municipal Prosecutor with the City of Calgary, a Canadian Bar Association Partner Organization. He is the co-chair of the Alberta Branch Access to Justice Committee, and a long-time Law Matters contributor with the “Unsung Hero” column. 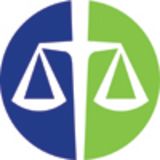 The quarterly publication of CBA Alberta. This issue focuses on historical perspectives - a look back at past CBA leadership by President S...

The quarterly publication of CBA Alberta. This issue focuses on historical perspectives - a look back at past CBA leadership by President S...