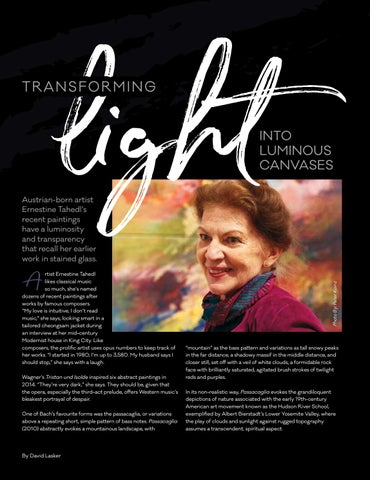 rtist Ernestine Tahedl likes classical music so much, she’s named dozens of recent paintings after works by famous composers. “My love is intuitive; I don’t read music,” she says, looking smart in a tailored cheongsam jacket during an interview at her mid-century Modernist house in King City. Like composers, the prolific artist uses opus numbers to keep track of her works. “I started in 1980; I’m up to 3,580. My husband says I should stop,” she says with a laugh. Wagner’s Tristan und Isolde inspired six abstract paintings in 2014. “They’re very dark,” she says. They should be, given that the opera, especially the third-act prelude, offers Western music’s bleakest portrayal of despair. One of Bach’s favourite forms was the passacaglia, or variations above a repeating short, simple pattern of bass notes. Passacaglia (2010) abstractly evokes a mountainous landscape, with

Austrian-born artist Ernestine Tahedl’s recent paintings have a luminosity and transparency that recall her earlier work in stained glass.

“mountain” as the bass pattern and variations as tall snowy peaks in the far distance, a shadowy massif in the middle distance, and closer still, set off with a veil of white clouds, a formidable rock face with brilliantly saturated, agitated brush strokes of twilight reds and purples. In its non-realistic way, Passacaglia evokes the grandiloquent depictions of nature associated with the early 19th-century American art movement known as the Hudson River School, exemplified by Albert Bierstadt’s Lower Yosemite Valley, where the play of clouds and sunlight against rugged topography assumes a transcendent, spiritual aspect.

Welcome to Spring 2019! Cayman Marshall’s latest edition of Collections is packed with ideas to fuel your real estate dreams, as the warm weather returns at last. Join us as we visit the Toronto showroom of bespoke kitchen makers Eggersmann Canada, and the two entrepreneurs who bring the great European brand to Toronto homes. If your dreams run to something more rustic, consider the value and beauty of modern log home construction – and how True North Log Homes puts this ancient building style right in tune with 21st century lifestyles. We also take a look at the colourful abstract canvases of artist Ernestine Tahedl, and meet the brave and caring counsellors of a Muskoka-area women’s centre. And it’s all alongside our comprehensive selection of the latest luxury sale and rental listings in the Toronto and Muskoka markets. Enjoy! 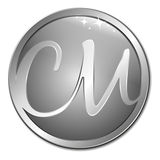