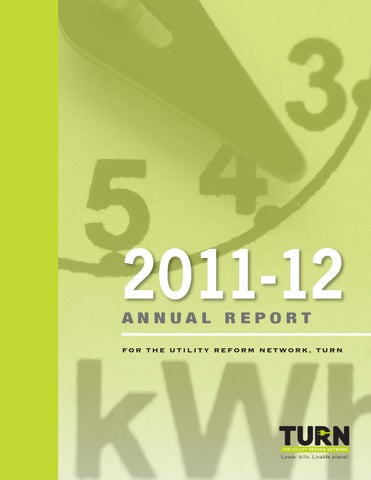 2011-2012 Annual Report TURN has been a statewide organization ever since the days we were a one-woman show run by Sylvia Siegel from her kitchen table. As we’ve grown, our impact in areas outside of our northern California home base has grown as well. This year, with the introduction of PolicyVoice and SDG&E ramping up efforts to rip off customers, TURN’s impact was felt more directly in many parts of California.

TURN executive director Mark Toney was featured in news stories throughout California, including KSFN TV in Fresno, ABC-10 TV in San Diego, and the San Jose Mercury News. TURN fought major rate cases on behalf of millions of southern California customers of SDG&E, SoCal Edison and SoCal Gas. In Los Angeles, a town hall community meeting hosted by TURN featured California Public Utilities Commission (CPUC) Commissioner Sandoval and Assemblyman Steve Bradford. As always, PG&E kept us busy in northern California, with a predictable and wholly unsatisfying response to the San Bruno explosion: a proposal for billions in new rate hikes to fix a pipeline system the company has neglected for too long. TURN continued to play a prominent role in the public debate over smart meters, and the urgent transition to more renewable energy, demanding energy that is clean, green and affordable. As your independent, non-profit consumer advocate, TURN is a first responder to changes to the telecom landscape, quickly and successfully organizing against AT&T’s attempt to acquire T-Mobile, and defending long-standing universal service requirements and policies. annua l rep o rt c o nt i nues o n page 4

our partners for change

A pr i l , San B e rnar d i no Over 40 community representatives and individuals came together in San Bernardino for a Town Hall that was organized by TURN with our PolicyVoice partner, Communities Organized for Prophetic Engagement (COPE), featuring CPUC Commissioner (and TURN alum) Mike Florio.

M ay, F r e s no Fresno consumers had a rare opportunity to address the CPUC in person at a public meeting held in Fresno in May. TURN worked with PolicyVoice partners Central California Legal Services and La Familia Advocacy to alert the community to this opportunity, and organized local consumers to speak out on universal phone service and other issues of concern. Augu s t, San F ranc i s co TURN’s lead PolicyVoice Bay Area partner, the Central City SRO Collaborative, has mobilized scores of low-income consumers to speak out at CPUC meetings on basic phone service and LifeLine low-income phone service. The Collaborative joined TURN and an expanded network of Bay Area community groups at the San Francisco Public Library to learn more about consumer assistance and activism at the CPUC. P o licy V o ice is grateful f o r funding fr o m :

Your investment in TURN comes back to you in bi California Court of Appeals Agrees With TURN: Oakley Plant Not Needed TURN doesn’t often appeal CPUC decisions to the courts, but the Oakley plant was an exception. Why should consumers pay $1.5 billion for a plant that PG&E was unable to prove was needed? After the CPUC caved to PG&E’s wishes with a shoddy decision approving the unneeded plant, TURN took the fight for affordable bills to the next level. Courts are generally hesitant to overturn CPUC decisions, but in this case, TURN prevailed! The court found that the Commission violated its own procedures and prevented TURN from getting a fair hearing on our argument that the electricity generated by the plant would not be needed by PG&E. That means consumers won’t pay an additional, unnecessary $1.5 billion.

Getting you more green for your green. Good Investment or Greenwash? PG&E wanted to charge customers $10 million to invest in a start-up company that would build solar panels, trying to greenwash the speculative investment as a new green energy initiative. TURN challenged the high-risk scheme, and convinced the CPUC to reject customer funding. In a 3-2 vote, the Commission agreed with TURN that the proposal was an unwise use of ratepayer money and unauthorized by law. The victory was an important check on the CPUC’s easy approval of any project labeled “green” or “smart,” regardless of costs or benefits, and sets a good precedent for other pending cases.

Making Renewables Work for California TURN has been a strong supporter of requiring California’s utility companies to increase their renewable energy purchases — but with cost controls. Another way renewables can be a better deal for consumers is if the energy purchased is local, creating green jobs right here at home. TURN won rules ensuring that utilities procure a large portion of their renewable obligations from facilities that are directly connected to the state’s transmission network, keeping more of your investment in green energy right here in California.

RENEWABLE ENERGY SHOULD BE CLEAN, GREEN AND AFFORDABLE

Consumers are fighting back — and winning — with TURN! TURN’s consumer advisor helped hundreds of TURN members and supporters to challenge unfair utility practices, advising on CPUC complaints, utility shut-offs, unfair phone bills and lower bill strategies. With TURN on their side, consumers won refunds, avoided shut-offs, and saved energy. Thousands more consumers took advantage of TURN’s online resources and print newsletter. Shutting Down Shut-Offs Utility shut-offs are truly a public health hazard, often leading to harmful consequences including homelessness and fires. Shut-offs can be reduced. New rules advocated for by TURN were adopted in March that will make it easier for customers to stay connected, including: n No deposit requirements for low-income customers with history of late payments or disconnects n Restrictions on remote disconnects n Requirements that utilities offer affordable payment plans n Allowing customers to sign up for discounted CARE service over the phone n New benchmarks for disconnection rates These critical protections for customers at risk of losing essential utility service will go a long way toward reducing dangerous and deadly shut-offs.

illions of savings. Residential Customer Protection The CPUC doesn’t only decide how much PG&E can collect in rates, it also determines how the total will be divided between “customer classes.” That means TURN’s constituents, residential and small business customers, are pitted against agricultural, commercial and industrial customers over who will bear the brunt of PG&E rate hikes. Despite the challenges, TURN successfully worked with other customer representatives to craft a settlement of PG&E’s revenue allocation that stopped residential customers from getting stuck with a bigger slice of the PG&E rate pie, and actually resulted in a small rate reduction.

No More Trailer Park Tricks! TURN achieved a victory for mobile home residents (and residential ratepayers in general) by getting the CPUC to lower the discount provided to master-metered mobile home parks that operate sub-metered electric systems for their tenants. This lower discount will reduce costs for the remaining body of residential ratepayers and should create additional pressure for the park owners to transfer their sub-metering systems to PG&E over time. These transfers will benefit mobile home park tenants by providing better quality service and de-linking utility bills from rent payments, thereby eliminating the prospect of being evicted for non-payment of utility bills. page 5

MEDIA ADVOCACY Keeping utility companies accountable means keeping consumer concerns front and center in the media. The utility companies use advertising and the press to try to pull the wool over customers’ eyes to justify their high profits and rates. TURN fights back by putting your perspective in the public eye. Our statewide media advocacy drew hundreds of results on television, the radio, online and in the print media: n

Protection & SAFETY CONSUMER PROTECTION AND SAFETY In the wake of the fatal PG&E explosion in San Bruno, pipeline safety continues to be an urgent issue for California consumers. TURN worked with key legislators on bills requiring gas safety improvements including: n

A Bigger AT&T Isn’t Better for Consumers Consumers have fewer and fewer choices for phone service, and AT&T’s plan to acquire T-Mobile could only make the situation worse. TURN alerted consumers and community groups to the threat to customer choice, and urged the CPUC to disapprove of the merger on behalf of California consumers. The Department of Justice and California Attorney General opposed the deal, as did an initial FCC staff report and hundreds of consumers who spoke out at the CPUC or contacted the Commission online. With pressure building, AT&T backed off and withdrew its petition to acquire T-Mobile. Transparency: In a side issue in the case, TURN won provisions that would preserve the record and permit parties to use materials subject to confidentiality protections in future non-related proceedings.

From All of Us at TURN

URN appreciates each and every donation we receive, not just because it helps fund our consumer advocacy and assistance, but also because we know your donations are a vote of confidence. TURN regrets that we donâ&#x20AC;&#x2122;t have the space to thank all our donors individually, because we are so grateful for all of your support. 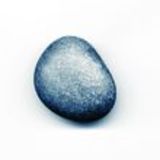