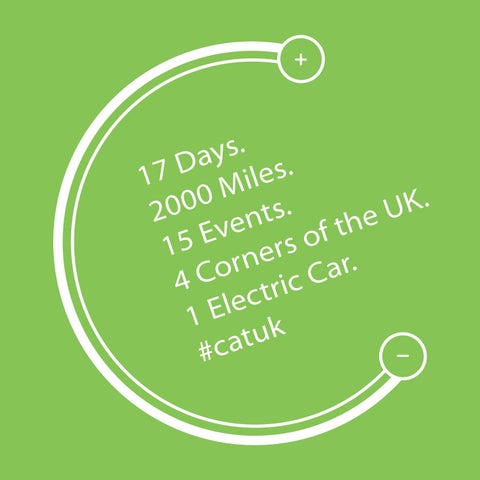 We’re pleased to be supporting the Charging Around the UK campaign.

ZOE has the longest range of any affordable, mass market electric vehicle, and it can be charged to 80% capacity in just 30 minutes, as standard. It’s quiet,

refined and nippy too, so it’s the perfect companion for such a long road trip. The average supermini covers 8,000 miles in a year, so for ZOE to be tackling a quarter

of this distance in just two weeks, will show just how viable it is as an alternative to fossil-fuelled transport today.

Charging around the UK

The campaign will stretch the entirety of the UK, covering London, John O’Groats, Lands End and culminating in Brighton. Spread out over 17 days, the POD Point team will stop at 15 cities to host major events along the way. This is not just another race from one end of the country to the other, this is a campaign with a purpose. Charging Electric Vehicles is not the same as refuelling, and is more akin to charging your mobile phone – with continuous top-ups. POD Point will show consumers that top-up charging is soon to become a part of everyday lives, and won’t interrupt your daily routine. POD Point will be breaking world records, cooking with a Michelin starred chef, and racing down mountains while they charge.

POD Point will help create customised Pod Chains for EV, in order to make charging a part of their everyday routine. This way you can top up your charge while at the gym, in the local supermarket or at a friends house. This campaign will create a CATUK Pod Chain for the journey, by using current charge points from all manufacturers and installing new PodPoint ones where needed. The support surrounding the growth of the EV industry is remarkable, and it is thanks to POD Point’s main sponsor Renault, and partners such as Sainsbury’s and Dominos, that there is a notable shift in the attitude towards electric vehicles. These brands are integral to a family’s daily life, and they are leading the way for change. Not only are major players in the consumer industry supporting the EV movement, but it’s receiving continuous support from governing bodies and POD Point continues to support local council charge point installations. This campaign is a celebration of the EV industry as a whole, and will highlight the changing attitude towards electric vehicles.

as they can build up their own unique POD Point charging chain. By choosing

On the 12th June POD Point will start a 2,000 mile charge around the UK in an electric Renault ZOE.

the location of their charging points, they don’t need to alter their daily routine, which is great for their travel plans Erik Fairbairn, Founder of POD Point

Event 1: Ripley’s Believe It or Not!

Event 14: ‘Electric Cars for Commuters ’ with

For more information about the events or to enter

the competitions please visit www.pod-point.com or

We are Pod Point

technology is currently helping UK Power Networks to manage the UK grid through their software.

Founded by Erik Fairbairn in 2009, Pod Point is one of Europe’s largest network of EV charging points, and provides outstanding software solutions. As an industry, EV charging is predicted to hit the billion pound mark by 2020.

Pod Point capabilities stretch far beyond simply producing charging points. Pod Point has been profitable for the last 12 months, and is currently growing at 100% annually with 25 full time staff. With an active network of over 200 installers across the UK, Pod Point is just about to produce its 10,000th charge point, making the company one of the largest suppliers of charge points worldwide.

The advanced software provides clients with the opportunity to monitor usage of each of our charging points, as well as providing a potential future revenue stream. The shift to a billing model will revolutionise the EV charging industry as we know it. Thanks to the engineers at Pod Point, key players within the industry are able to start making a profit from their charging infrastructure.

Pod Point is launching its first major ‘Charging around the UK’ campaign on the 12th June, taking one electric car 2,000 miles around the UK and stopping off in 15 cities. More details coming soon.

Pod Point 2009 - Present Since we launched On the 12th June POD Point will start a 2,000 mile charge around the UK in an Electric Car! The #CATUK team will sprint from London up to J...

On the 12th June POD Point will start a 2,000 mile charge around the UK in an Electric Car! The #CATUK team will sprint from London up to J...