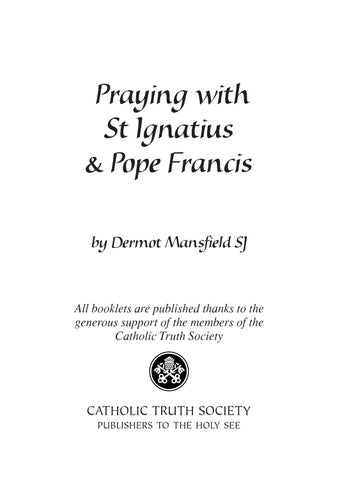 Responding to the Love of God ope Francis, in his interview for Jesuit publications released some six months after his election, has spoken of his favourite image of the Church, as “that of the holy, faithful people of God”. A rich and vibrant image for him, it had been put forth prophetically by the Second Vatican Council, which described how we are called as a messianic people by God, and “established by Christ as a communion of life, love and truth”. The Council also described how, in consequence of God’s choosing, we are “the light of the world and the salt of the earth, sent forth into the whole world”.

Such is the vision of Vatican II, as given in its Dogmatic Constitution on the Church, paragraph 9. And for Pope Francis, who so evidently values and relishes personal engagement, “the web of human 5

relationships”, as he puts it, is the place where God enters into history - so that “the Church is the people of God on the journey through history, with joys and sorrows”.

Chosen as a People and as Individuals However, if we are chosen as a people, it is because also, in the first place, we are each of us called by name, in an utterly personal and unique way. This personal calling is there for us always, as we exist within the varying networks of relationships that are ours from childhood onwards, and as we travel along the course of our lives. Indeed Jorge Mario Bergolio to give Pope Francis his own proper name - has had a personal sense, over the years, of being chosen. He has as his motto the Latin words of St Bede the Venerable referring to the call of Matthew, ‘Miserando atque Eligendo’, which, in accordance with Bede’s commentary, can be translated as: “And Jesus, looking on him with the eyes of mercy, chose him”. It follows that something like this awareness can be there for each of us. Within the context of all the people that have formed my life, there can arise an acute sense of how God is really there before me, calling me by name - although unworthy and a sinner - and desiring to enter deeply into the house of my heart. 6

A Jesuit Pope Of significance is the fact that Pope Francis has been a member of the Jesuit religious order, in its South American province of Argentina. So, while he always remembers the many other influences - and especially the close and warm familial ones - enriching the gift of faith in him, he also remains conscious of how he has been affected by the spirituality of St Ignatius of Loyola, founder of the Jesuits. For, although Ignatius is best known for his role in founding that order in the sixteenth century, nevertheless his greatest significance lies in how he himself deeply experienced God - and then worked out a way, a spirituality, whereby any of us can likewise experience God ourselves, and begin to discern how we are being called and led onward by God. All this St Ignatius did, interestingly, as a layperson. He was simply an ‘ordinary Christian’ among God’s people, firstly when he had the experience of God invading his life, and secondly when over time he compiled the text which he named the ‘Spiritual Exercises’. In the hands of any good guide or director, the set of notes and guidelines comprising the Exercises were intended as the means by which if we can set aside the required time - we can 7

experience God’s presence and calling, and be enabled to live out henceforth the consequences of that blessing. And for Pope Francis then, as a Jesuit and follower of St Ignatius, the spirituality contained in the Spiritual Exercises has been a major influence - he has relied on it for long years, considering it valuable both for himself and for many others in life today. This he has stressed in the interview noted above. As it happens, this particular introduction to Ignatian spirituality, which you have in your hands, was already published some years ago, under the title, Praying with St Ignatius of Loyola. At that time, in 2006, some Jesuit anniversaries were being remembered. There was the 450th anniversary of the death of St Ignatius, who had eventually studied for ordination and lived to see the considerable expansion of the order he named the Society (‘Companionship’) of Jesus. And secondly, there was the 500th anniversary of the birth of the two earliest companions of Ignatius, namely Francis Xavier and Peter Favre. Of these companions, Francis Xavier is of course the better known, because of the missionary trail he blazed to the East; to India, and Indonesia, and to Japan. But Peter Favre (or Faber) 8