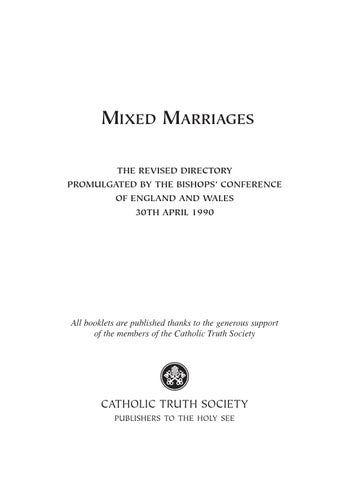 INTRODUCTION The Catholic Church in England and Wales recognises that the question of ‘mixed marriages’ is a very important one, and one that raises a number of delicate ecumenical and pastoral issues. The Church’s policy concerning marriages between Catholics and those of other faiths or none was clearly spelt out by the late Pope Paul VI in a Motu Proprio “Matrimonia Mixta” in 1970. Since then a new Code of Canon Law has been promulgated by Pope John Paul II. It seems appropriate now for the Bishops of England and Wales to revise the Directory which we first published in 1970 and revised in 1977. We are aware that this Directory is concerned with only one aspect of some marriages, namely a difference of faith between the partners. We are equally aware of the need for pastoral guidance concerning the Sacrament of Marriage, preparation for marriage and the Church’s support for those who are married1. The years since 1970 have seen steady progress in the search for unity between divided Christians. The visit to this country by Pope John Paul II in 1982 was remarkable not least for the warmth of the welcome given to the Pope by so many of our Christian brothers and sisters from other Churches. It was the Pope himself who described this country as a ‘special ecumenical terrain’. The continuing dialogue between the Catholic Church and the other Christian Churches in this country has helped to create a new ecumenical situation and a commitment to grow into full unity2. This should be reflected in our approach to so important a question as mixed marriages. Episcopal Conference of England & Wales

MIXED MARRIAGES At the outset it is important that we should distinguish clearly between different kinds of ‘mixed marriage’. ‘Neither in doctrine nor in law does the Church place on the same level a marriage between a Catholic and a baptised non-Catholic,3 and one between a Catholic and an unbaptised person; for, as the Second Vatican Council declared, those who, though they are not Catholics, “believe in Christ and have been properly baptised are brought into a certain, though imperfect, communion with the Catholic Church”. Moreover, although Eastern Christians who have been baptised outside the Catholic Church are separated from communion with us, they possess true sacraments, above all the Priesthood and the Eucharist, whereby they are joined to us in a very close relationship. Undoubtedly there exists in a marriage between baptised persons, since such a marriage is a true sacrament, a certain communion of spiritual benefits which is lacking in a marriage entered into by a baptised person and one who is not baptised.’ (Matrimonia Mixta (MM) Paul VI, 1970) The question has been asked as to the appropriateness of the term ‘mixed marriage’ to describe a variety of different situations. Pope Paul VI was himself well aware of the problems created by this particular term. In many parts of the world it is used to describe marriage between members of different races. It is widely used in that sense in Britain. Even in its religious use it refers indiscriminately to widely different marriages. On the one hand it refers to the marriage of a Catholic to a non-baptised person or to someone who, although baptised, is not an active member of any Church. On the other hand it also refers to the marriage of two practising and committed Christians. It is obviously important to make the distinction very clear. The suggestion has been made many times that the more appropriate term to describe the second kind of marriage would be ‘inter-church marriage’. In the course of 3 This phrase, ‘non-Catholic’, is a translation from the Latin texts cited and is used in a number of places throughout this document. We apologise to those who may not consider it the most suitable term.

this Directory we would want to recognise the particular pastoral needs of such ‘inter-church marriages’, and we would be anxious to show the same pastoral sensitivity that Pope John Paul expressed in his address at York in 1982: ‘In your country, there are many marriages between Catholics and other baptised Christians. Sometimes these couples experience special difficulties. To these families I say: You live in your marriage the hopes and difficulties of the path to Christian unity. Express that hope in prayer together, in the unity of love. Together invite the Holy Spirit of love into your hearts and into your homes. He will help you to grow in trust and understanding.’ Whilst we shall consider both the problems and the opportunities created by a genuine ‘inter-church’ marriage, we must recognise that in our pastoral practice such marriages are very much the exception. The vast majority of our marriages could not properly be described as ‘inter-church’. It is our duty also to give clear guidance in this Directory to those involved in mixed marriages where this ecumenical dimension is missing. The reason why we still make use of the general term ‘mixed marriage’ to cover these widely differing situations is that we are part of a world-wide communion, and that we have a great deal of international correspondence about marriage cases of one kind or another. Great confusion could be caused if we were to adopt our own purely local terminology with regard to marriage.

THE CHURCH’S BASIC ATTITUDE The Church has always had a special care for those who enter the married state, both in the preparation of those couples for marriage and in supporting their Christian family. The Church speaks of the family as ‘the domestic Church’, and is well aware that unity within the family is always something vital to the stability and development of that marriage. There are so many factors today which militate against that vital unity that the Church is naturally worried about blessing a union where religion itself might become a source of division. 5