biography of Pier Giorgio Frassati B749 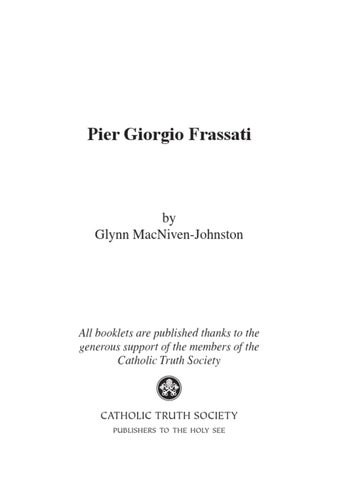 Introduction In 2008, World Youth Day was held in Sydney, Australia, and hundreds of thousands of young people came from all over the world to participate. Among them was Pier Giorgio Frassati, an Italian from Turin. Unlike the others, though, he came in a one hundred and fifty kilogram zinclined coffin. He had died in 1925 at the age of twentyfour but the Australian Catholic Church held him in such high esteem as a patron of youth that they asked for him to be brought to Australia. The sealed casket remained in St Mary’s Cathedral in Sydney for the time of the meetings (since World Youth Day actually lasts about a week) and many liturgies were built round his life and example. This is the young man of whom Blessed John Paul II said, “Pier Giorgio was a young man overflowing with a joy that swept everything along with it, a joy that overcame so many difficulties in his life because the period of youth is also the time of trial and strength.”

Family Background To an outsider it might seem as if Pier Giorgio Frassati was born into a privileged life. His family was wealthy and successful with homes in Turin and Pollone. His parents were both high achievers. His father, Alfredo Frassati, a graduate in law, was a successful entrepreneur, the owner and editor-in-chief of a national newspaper. In 1895, aged thirty-six, he had bought a local paper called Gazzetta Piemontese, and transformed it into one of the first national newspapers in Italy, La Stampa. Pier Giorgio’s mother, Adelaide Ametis, was a painter of some renown who had studied under Alberto Falchetti, a then-famous landscapist. She exhibited at national shows including several times at the Venice Biennale, and in 1912 one of her paintings was bought by King Victor Emmanuel III. But families are not always as they seem. Alfredo and Adelaide’s marriage was extremely unhappy. They had married for love but soon discovered they had nothing in common, and their marriage became a battleground. Childhood The couple’s first child, Elda, was born in 1899 but had died aged only eight months, and so it was with great joy that they welcomed their son and heir on 6th April 1901, which

that year was Holy Saturday. Pier Giorgio was baptised immediately after birth as he was not breathing well. He was called Pier Giorgio Michelangelo. In fact, Alfredo had wanted the name Pietro after his father but Adelaide objected and they compromised by adding Giorgio. A year and a half later, Pier Giorgio’s sister Luciana was born. These were the Frassatis’ only children. The two children were extremely close. They were thrown together as observers of their parents’ volatile relationship. Luciana later described the atmosphere of their home as “an ill-defined nightmare”. Meals were a special flashpoint, with Alfredo insisting that they eat dinner as soon as he returned from work, with no excuses and no delays. The tiniest infringement of his routine was met with enormous fuss. It was at this moment in the day that he would berate his wife for her inability to keep accounts, meaning that Adelaide would often run from the table in tears. Perhaps it was no wonder, then, that Adelaide preferred the company of her sister and emphasised more and more her identity as a member of the Ametis family. Alfredo dedicated himself to the newspaper, Adelaide dedicated herself to art; neither dedicated themselves to the children. Strict parents As parents, Alfredo and Adelaide were strict, even by the standards of the day. The children were kept at home in a rather claustrophobic atmosphere. They were never allowed

out by themselves and when out with an adult they had to walk smartly and quickly, facing straight ahead and not looking round in a vulgar manner. Likewise, when at home, they were not to stand gawping out of the windows. Alfredo did play with the children when they were small, when he was at home, which wasn’t often especially if the family were staying at the Villa Pollone, which, he was constantly being reminded, was the Ametis’ family home and not his. It was this persecution of her father by her mother’s family which drew Luciana to her father and he loved her in return. Since she was a girl he expected nothing of her and was therefore more able to accept her as she was. He found Pier Giorgio disappointing and slow and did not hold back from humiliating him in public. Pier Giorgio’s future was set. He was heir to the newspaper. In fact, Luciana was everything Alfredo wanted in an heir, quick, clever and sophisticated, but there was never any thought that she could take over or even that she would ever work. Adelaide was closer to Pier Giorgio, but she was a mother who didn’t allow any show of weakness in her son. She insisted that he excel, not waste time or daydream. More often than not, both Pier Giorgio and Luciana were treated as if they were nuisances. Luciana later described their daily life as “a sea of prohibitions”. The children grew up starved of affection, starved of attention and sometimes even starved of food since their parents thought that was good for them. However, Luciana later wrote that their childhood taught them endurance and humility.

Schooldays and Faith It is extraordinary, then, that Pier Giorgio loved life. He was a lively, active, noisy and fun-loving boy who attracted friends easily. He loved being outdoors and hated being cooped up inside. His mother encouraged him in his love of sport: climbing, skiing, riding, cycling - anything that was energetic. He was brave, too, and once saved a girl who was going to fall through the ice when they were skating. The children were home-schooled at first, and when Pier Giorgio was eight, he asked their Latin teacher, a priest, to tell him the life of Jesus. The Frassati family was not very religious. Although recognised for his honesty, evenhandedness and moral fibre, Alfredo was an agnostic. The Ametis family, meanwhile, would not have missed Mass but they were cynical about the faith and critical of the Church. Adelaide did not allow religion to interfere with life. She was a respectable Catholic but did not believe in exaggerating. In 1908 both children failed their public exams. No one cared about Lucianaâ&amp;#x20AC;&amp;#x2122;s failure, but for Pier Giorgio, as the future director of La Stampa, to have failed, was considered catastrophic. Adelaide wrote to her sister that she did not know what would become of him. She feared for his future. He was seven.

The children were sent together to the local school, where Pier Giorgio gained a reputation for being a bit of a class clown, mainly because he was always the last to stop laughing and therefore the first to get caught. This only increased his parents’ view that he was careless and feckless. Again in 1913 he failed, this time a Latin exam. Luciana passed, but no one cared. This latest exam failure was treated as if it were world-shattering, and Pier Giorgio wrote in a letter to his father, “I saw how upset Mama was and I thought about you being upset so much that I don’t know how to say I’m sorry.” The children were then separated for the first time, and Pier Giorgio was sent to a strict Jesuit school, which, as far as his faith was concerned, was to turn out to be a blessing. A maturing faith It was at this Jesuit school that Pier Giorgio’s faith was nurtured. He began to pray morning and evening. Once, his father found him asleep holding a rosary and, horrified that his son was being brainwashed, went to complain to the local priest. The priest, however, asked if Alfredo would prefer to find his son asleep over some trashy book, and Alfredo was silenced. Adelaide was a very contradictory woman who taught her children to persevere in everything and never to give in to pain or tiredness but herself often over-reacted. She loved her son but was hypercritical of everything he did

and understood him not at all. By the time Pier Giorgio was thirteen, Adelaide was terrified that he would become dissolute, even depraved, something which was very far from his character. She didnâ&amp;#x20AC;&amp;#x2122;t want him to go to confession in case the confessor questioned him about impure thoughts and that somehow set him off on the path to becoming a sex-fiend. She was eventually reassured by the school chaplain. At the same time she opposed Pier Giorgioâ&amp;#x20AC;&amp;#x2122;s request to be allowed to go to daily Mass and receive daily Communion, something he had been offered the opportunity to do at school but needed her permission for. She believed that going to daily Mass like a silly old woman would turn him into a narrow-minded fanatic. It took Pier Giorgio four days to get her to say yes. Perhaps it was as well she did not know that he alone of his class enjoyed the religious education lessons. World War I Despite being full of energy, Pier Giorgio found some of his life at this time very heavy. He was thirteen and felt overburdened by all he had to do. Some things he really hated. He especially loathed piano lessons, and on top of it all he had masses of schoolwork; but he persevered in all of it because this is how he had been brought up. Although he was in no way as stupid as his mother seemed to believe, he did not find school easy. His parents were disappointed in him for his lack of easy success and for getting into

biography of Pier Giorgio Frassati B749