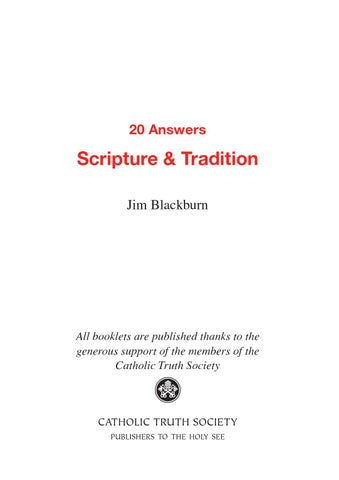 b. 20 Answers - Scripture and Tradition.indd 1

publishers to the holy see

b. 20 Answers - Scripture and Tradition.indd 2

Introduction All Christians generally agree that Christian doctrine must be determined in accordance with God’s revelation. It makes sense that everything God has revealed is worthy of belief and, in many cases, necessary for salvation. Indeed, Jesus, quoting from Deuteronomy 8:3, emphasises the importance of the word of God: “It is written, ‘Man shall not live by bread alone, but by every word that proceeds from the mouth of God’” (Mt 4:4). Tragically, though, not all Christians agree on what God’s word is, and thus do not agree on all matters of Christian doctrine. Most non-Catholic Christians claim that the Bible alone is the word of God. This is a relatively novel idea in the history of Christianity, having come to the fore only since the time of the Protestant Reformation. For most of Christian history, Christians have believed that Scripture does not constitute the entirety of the deposit of faith that the first Christians received long before a book of the New Testament was ever written (see Jude 3). That faith was first delivered to the early Church orally, not in writing. Scholars nearly unanimously agree that the first books of the New Testament (1 and 2 Thessalonians)

b. 20 Answers - Scripture and Tradition.indd 3

were not written until the middle of the first century, around AD 50-52. Yet, even without these books, the revelation of Jesus Christ was being spread through the oral teaching of the apostles and their successors. The books of the New Testament came to be written over a period of several decades, and it was not always immediately apparent exactly how they should be understood (see 2 P 3:16). So the early Christians came to interpret them correctly through authoritative oral teaching - what the Church calls Sacred Tradition (see 2 P 1:20-21). Since the Protestant Reformers rejected Sacred Tradition, the descendants of their faith tradition have been left with only their own fallible interpretations of Scripture alone (sola scriptura) with which to determine their doctrines. This has resulted in countless disagreements and widespread splintering into thousands of Christian denominations. It is my hope that this booklet will help to dispel the myth of sola scriptura and be a useful instrument for helping Christians fully embrace the word of God. 1. What is the “word of God”? The term word of God refers to God’s divine revelation to humanity, in which he reveals himself to us for the sake of our salvation. The Vatican II document Dei Verbum (DV) explains:

b. 20 Answers - Scripture and Tradition.indd 4

Through divine revelation, God chose to show forth and communicate himself and the eternal decisions of his will regarding the salvation of men. That is to say, he chose to share with them those divine treasures which totally transcend the understanding of the human mind. (6) Christians generally agree that the fulness of God’s revelation is the Son of God, Jesus Christ. St John begins his Gospel writing about the “Word” in this sense: In the beginning was the Word, and the Word was with God, and the Word was God. He was in the beginning with God; all things were made through him, and without him was not anything made that was made. In him was life, and the life was the light of men. The light shines in the darkness, and the darkness has not overcome it. (Jn 1:1-5) Word of God is used in this same sense elsewhere in the New Testament,1 but we also find a secondary sense of the term: to refer to the spoken and written revelation of God upon which Christian teaching is based, and which is passed on from generation to generation. For example, in the Acts of the Apostles, Luke writes about “preaching the word of God” (6:2) and how it “increased” (6:7) as well as “grew and multiplied” (12:24). In Acts 13, the word of God is “proclaimed” (13:5), “spoken” (13:46), and people

b. 20 Answers - Scripture and Tradition.indd 5

came to “hear” it (13:7, 44). In Acts 18, St Paul is depicted “teaching” the word of God (18:11). It is this secondary sense of the term that Christians most often have in mind when we refer to the revelation of God that has been entrusted to the Church and taught throughout history. It contains the truths that Christians must believe and make active in our lives for the sake of our salvation and the salvation of others. St Jude calls it “the faith which was once for all delivered to the saints” (Jude 3). Jesus entrusted this deposit of faith to the apostles and their successors, guided by the Holy Spirit, to be safeguarded from corruption and taught in every age just as Jesus commissioned them to do before his Ascension (see Mt 28:19-20). Dei Verbum elaborates: In his gracious goodness, God has seen to it that what he had revealed for the salvation of all nations would abide perpetually in its full integrity and be handed on to all generations. Therefore Christ the Lord in whom the full revelation of the supreme God is brought to completion (see 2 Co 1:20; 3:13; 4:6), commissioned the apostles to preach to all men that gospel which is the source of all saving truth and moral teaching, and to impart to them heavenly gifts. This gospel had been promised in former times through the prophets, and Christ himself had fulfilled it and promulgated it with his lips. (7)

b. 20 Answers - Scripture and Tradition.indd 6

It is important to recognise that the apostles carried out their commission both through preaching and writing. The Catechism of the Catholic Church (CCC) explains: In keeping with the Lordâ&#x20AC;&#x2122;s command, the gospel was handed on in two ways: 1. Orally by the apostles who handed on, by the spoken word of their preaching, by the example they gave, by the institutions they established, what they themselves had received - whether from the lips of Christ, from his way of life and his works, or whether they had learned it at the prompting of the Holy Spirit. 2. In writing by those apostles and other men associated with the apostles who, under the inspiration of the same Holy Spirit, committed the message of salvation to writing (76). In the Catholic Church, we refer to the apostlesâ&#x20AC;&#x2122; preaching, examples, and institutions as Sacred Tradition (or apostolic tradition) and their writing (including the Old Testament that they received from the Jews) as Sacred Scripture. Many other Christians believe that only the written Bible is the word of God. They see Scripture alone as the only definitive source of divine truth. Catholics, however, believe that God did not limit his revelation to a book; instead he gave his saving truth to mankind in two complementary and equally authoritative forms.

b. 20 Answers - Scripture and Tradition.indd 7

There exists a close connection and communication between Sacred Tradition and Sacred Scripture. For both of them, flowing from the same divine wellspring, in a certain way merge into a unity and tend toward the same endâ&#x20AC;Ś[I]t is not from Sacred Scripture alone that the Church draws her certainty about everything which has been revealed. Therefore both Sacred Tradition and Sacred Scripture are to be accepted and venerated with the same sense of loyalty and reverence. (DV 9). Thus, the Catholic Church bases its teaching upon one source: the word of God, transmitted to his people in two ways. 2. What is Sacred Scripture? Sacred Scripture is the written form of the word of God. It comprises the books of the Old and New Testaments, that is, the Christian Bible. The Old Testament is important because it sets the foundation for the fulness of Godâ&#x20AC;&#x2122;s revelation in Jesus Christ. Dei Verbum explains: The plan of salvation foretold by the sacred authors, recounted and explained by them, is found as the true word of God in the books of the Old Testament: these books, therefore, written under divine inspiration, remain permanently valuable. The principal purpose to which the plan of the old covenant was directed was to

b. 20 Answers - Scripture and Tradition.indd 8

B 20 answers scripture and tradition sample

B 20 answers scripture and tradition sample