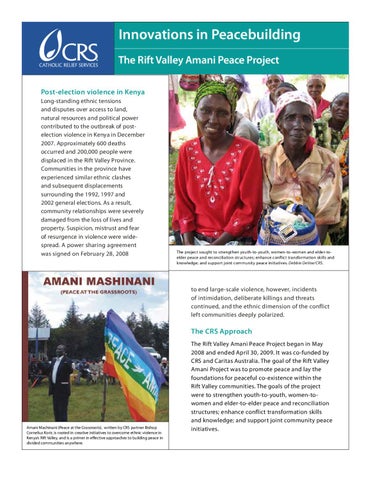 Innovations in Peacebuilding The Rift Valley Amani Peace Project Post-election violence in Kenya Long-standing ethnic tensions and disputes over access to land, natural resources and political power contributed to the outbreak of postelection violence in Kenya in December 2007. Approximately 600 deaths occurred and 200,000 people were displaced in the Rift Valley Province. Communities in the province have experienced similar ethnic clashes and subsequent displacements surrounding the 1992, 1997 and 2002 general elections. As a result, community relationships were severely damaged from the loss of lives and property. Suspicion, mistrust and fear of resurgence in violence were widespread. A power sharing agreement was signed on February 28, 2008

to end large-scale violence, however, incidents of intimidation, deliberate killings and threats continued, and the ethnic dimension of the conflict left communities deeply polarized.

Amani Mashinani (Peace at the Grassroots), written by CRS partner Bishop Cornelius Korir, is rooted in creative initiatives to overcome ethnic violence in Kenyaâ&#x20AC;&#x2122;s Rift Valley, and is a primer in effective approaches to building peace in divided communities anywhere.

The Rift Valley Amani Peace Project began in May 2008 and ended April 30, 2009. It was co-funded by CRS and Caritas Australia. The goal of the Rift Valley Amani Project was to promote peace and lay the foundations for peaceful co-existence within the Rift Valley communities. The goals of the project were to strengthen youth-to-youth, women-towomen and elder-to-elder peace and reconciliation structures; enhance conflict transformation skills and knowledge; and support joint community peace initiatives.

Through intra-ethnic and inter-ethnic meetings, attitudes and perceptions of the local communities towards one another have improved. Trained participants are now better equipped to intervene in conflicts and their knowledge has been shared with communities through various forums. Collaborative projects have provided new opportunities to interact constructively and address common needs and interests.

Results As a result of the project and other factors (such as existing grassroots negotiation mechanisms), fear was reduced and people began to move more freely within marketplaces, schools, and churches.

The project implemented a wide range of activities, including intra-communal and intercommunal dialogue, training, exchange visits, cultural fairs and sports, video documentaries of peace and relationship building for use in community training, and a book describing the mediation processes and skills used by an influential Catholic bishop and the application of lessons from his earlier interventions.

The project overcame substantial challenges, including insecurity, vast geographical coverage, multiple language groups, and participants and staff suffering from suppressed trauma from the post-election crisis. The projectâ&#x20AC;&#x2122;s evaluation extracted several lessons learned while revealing that the implementing partners provided invaluable local knowledge of the context and considerable peacebuilding competency. In addition to peace committees organized as part of the project, the project also energized existing community-based organizations, such as farmers groups, as entry points to increase ownership and effectiveness.

Looking Ahead The peace committees meet regularly for deliberation and discussion of the local peace agendas. They have helped establish a structure and process for non-violent dispute and communal conflict resolution. Only time will tell whether they are able to resolve the root causes of the many conflicts that have flared in the Rift Valley, the peace committees offer an important first step towards addressing these causes by building greater communal trust and consensus around working towards solutions on their ten prioritized issues. 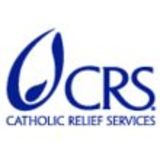