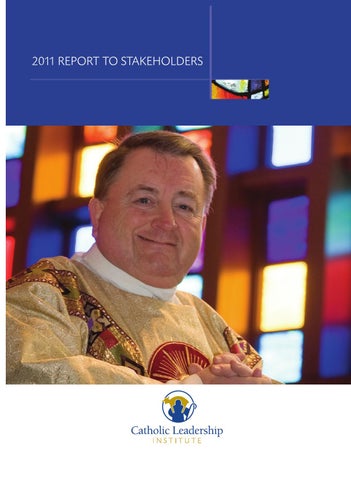 Thank you! What a blessing it has been to serve the Church through this unique ministry for the past two decades. Reflecting back on those twenty years fills us with joy and thanksgiving. We recall your leadership, love and passion which have enabled Catholic Leadership Institute to serve bishops, priests and lay leaders in more than 60 dioceses across the country. As we continue to expand the ministryâ&amp;#x20AC;&amp;#x201D;and move another year closer to fulfilling our commitment of Fostering Vision, Building Skill and Strengthening Relationships at every level of the Churchâ&amp;#x20AC;&amp;#x201D;your support and prayers become ever more critical. The ministry of Catholic Leadership Institute is unlike any other serving the Church today. Your support reflects an image of hope and vibrancy for the good leaders and good shepherds of our Church. Like each individual piece of a stained glass window, your impact is distinctly unique. In the pages ahead you will see examples of that impact and the beauty it is creating in our Church. You will see the excitement on the faces of the faithful of the Diocese of Laredo, as their shepherd Bishop James Tamayo proclaims a vision for their future. You will see Good Leaders, Good Shepherds graduate Fr. Richard Walsh collaborate with his staff to build a more vibrant faith community at St. Margaret Mary Parish in Orlando. You will see former Vatican Ambassador, Secretary Jim Nicholson strengthening relationships with Catholic leaders across the United States, as he extends his hand and an invitation for lay leaders to engage in this vital mission. What you will see is growth and impact, inspired by you and made possible because of the time, talent and treasure you have invested in the ministry of Catholic Leadership Institute. The new brand identity which we unveiled earlier this year represents our universal call as disciples to be both the sheep and the shepherd. Thank you for embracing that call through your support of Catholic Leadership Institute. We continue to feel humbled and privileged to serve our bishops, priests and all leaders of the Roman Catholic Church. God bless! Sincerely,

“As your Bishop, I will seek to be of one mind and one heart with Christ, the Good Shepherd, that I may lead you, my beloved people of the Diocese of Laredo, in Building Unity within Our Diocesan Community.” – Bishop James Tamayo

Bishop James Tamayo and the Diocese of Laredo On the 10th Anniversary of the founding of the Diocese of Laredo, Bishop James Tamayo - the diocese’s first shepherd – proclaimed these words: “I will seek to be of one mind and one heart with Christ...that I may lead you, my beloved people of the Diocese of Laredo, in Building Unity within our Diocesan Community.” The crowd of more than 8,000 celebrated. This young diocese had a clear direction aligned with the vision of Jesus Christ and the Catholic Church, and they had a good shepherd to lead them on the journey. They had a vision. Situated in South Texas, on the border of Mexico and the U.S., the Diocese of Laredo is considered one of the 83 mission dioceses in the United States. While rich in tradition, the diocese is under-resourced and its pastoral challenges are great. High quality skill-building and planning services were necessary in order for the diocese to thrive, but these were nearly unattainable. Because of your love and care for the good leaders and good shepherds of our Church, Bishop Tamayo was able to take advantage of Catholic Leadership Institute’s ongoing formation sessions for bishops. According to Bishop Tamayo, his experience at these sessions “triggered a personal response in recognizing the need to develop a

vision and identify priorities within the Diocese of Laredo.” Over the course of a year, Catholic Leadership Institute facilitated a process for the Bishop and his Envisioning Leadership Team to listen to the people of Laredo, to prayerfully discern God’s calling for their diocese, and to clarify the Sacred Purpose, Values, and Vision as well as Pastoral Priorities to make that vision a reality within the Diocese. With a clear vision and plan for the future, Laredo can now better align their resources and roles toward achieving the shared vision. This is a time of celebration and hope, not just for the people of Laredo but for all who make up the Body of Christ. A clear direction leads to more participation in the life of the Church and the practice of the faith, both of which lead to the manifestation of the Kingdom of God here on earth.

Fiscal Year 2011 Highlights • The Diocese of Laredo joined the Diocese of Kalamazoo, MI as the first dioceses to complete Catholic Leadership Institute’s Envisioning process. • The United States Conference of Catholic Bishops (USCCB) engaged Catholic Leadership Institute as an “outside expert” to asses the effectiveness of its recent reorganization. • Archbishop J. Michael Miller, C.S.B. of the Archdiocese of Vancouver and Bishop John Kirby of the Diocese of Clonfert, Ireland became the first bishops from outside the United States to participate in the ongoing formation sessions for bishops. 2011 report TO Stakeholders catholic leadership institute

“I can’t do it myself. I need a staff to support me in my role as pastor. I believe in shared decision making and I believe in the value of a staff that is equipped with good leadership skills.” – Fr. Richard Walsh

St. Margaret Mary Parish, Diocese of Orlando Fr. Richard Walsh has been the Pastor of St. Margaret Mary Parish since 1985. During those 25 plus years, he has built a new family life center, remodeled the church and the parish hall and expanded the adjoining school. He has built relationships with the more than 3,500 parish families and he has built a staff to support him and the faith community. Several years ago, he decided it was time to renew and rebuild his leadership skills and those of his 33 member staff. Enrolling in Good Leaders, Good Shepherds was an opportunity for Fr. Walsh to reflect on areas of leadership in which he needed further growth. By nature, he is not a planner and often lets himself get bogged down in the day-to-day responsibilities of his ministry. Setting a vision, a plan and priorities was a luxury Fr. Walsh just didn’t think he had time to enjoy. “For me, Good Leaders, Good Shepherds highlighted the importance of having a parish plan and the need to align my staff with that same vision,” said Fr. Walsh. So when Fr. Walsh was presented with the opportunity to enroll some of his parish staff in a similar leadership formation program, he jumped at the chance. He supported three key members of his staff in their participation of Tending the Talents. “Our staff was at a point in time where we needed to be challenged, we needed something to

take us to the next level,” said Lori Reinneck, Director of Family Ministries. “Tending the Talents was it.” As the team began to connect their leadership formation experience with that of Fr. Walsh’s, the dynamic of the parish staff began to shift. “We felt really inspired and focused and took some responsibility to share with the larger staff what we learned, what we were excited about and ways we could be more efficient,” said Reinneck. Led by Fr. Walsh and supported by his staff, the parish began an 18 month process of setting a vision and a mission. In November of 2010, Fr. Walsh unveiled that vision and mission and named four priorities— hospitality, liturgy, witnessing and sharing—by which all work of the parish would be guided. Through his investment in his own leadership formation and that of his staff, Fr. Walsh developed a community of leaders, focused and equipped to help build the Kingdom of God.

“Lay people have a critical role as leaders in the Church. We need to stand up for the Church, defend it and set an example by the practice of our faith.” – The Hon. Sec. R. James Nicholson

Secretary R. James Nicholson Secretary Nicholson has been a life-long servant of his country and his Church. His distinguished public service career includes over thirty years of both active and reserve duty in the United States Army as well as his service as the Secretary for Veterans affairs and the U.S. Ambassador to the Vatican. Most recently, he has been called to serve as an ambassador for Catholic Leadership Institute. In Fiscal Year 2011, Catholic Leadership Institute embarked on a national campaign to ensure the Institute can continue to serve the leadership formation needs of the Roman Catholic Church. To help support this initiative, Catholic Leadership Institute formed a National Advisory Board. Rooted in his love for the Church, Secretary Nicholson agreed to serve as the co-chair of this newly formed board. Alongside Cardinal Seán O’Malley, he committed his gifts and talents so that the ministry of the Institute would be strengthened and its support of the Church expanded.

Since taking on this new role, Secretary Nicholson has worked to engage and encourage national Catholic leaders to connect their passion for serving the Church with a mission and ministry that is working hard to support its shepherds. “Catholic Leadership Institute is a gift God has given us in the Church. Tim Flanagan and those who lead this have provided an organized approach to the way it&#39;s going about trying to enable and empower priests and religious in our Church. It is really fulfilling a critical need.” Secretary Nicholson is fulfilling a critical need as well: the need for Catholic leaders to be, as the Holy Father Pope Benedict said, “co-responsible for the being and action of the Church.”

statement of activities Support and Revenue

Catholic Leadership Institute reports its financial information on an accrual basis. In Fiscal Year 2011, Catholic Leadership Institute donors committed a record-breaking $3.8 Million in cash gifts, multi-year pledges and deferred gifts to the mission of building Catholic leaders for today and tomorrow. Those commitments translate to $1.7 Million on an accrual basis as shown in the table below. We are grateful to all of the Catholic philanthropic leaders who contributed to this incredible witness of generosity.

Participant Fees Contributions and Special Events Investment and Other Income

stakeholder listing Your generosity and stewardship have made a significant impact in the ministry that is building Catholic leaders for today and tomorrow. This report recognizes those individuals, corporations, foundations and organizations that have made a gift to Catholic Leadership Institute between July 1, 2010 and June 30, 2011. The list also includes those individuals who have made multi-year commitments. Catholic Leadership Institute apologizes for any errors. Please call Maureen Bergmaier at 610-363-1315 if an error is found.

“It has been exponentially fulfilling to work with the Church and organizations like Catholic Leadership Institute.”

Since 2009, Archbishop Gregory Aymond (pictured above) of the Archdiocese of New Orleans has served as Episcopal Moderator for Catholic Leadership Institute. Alongside nine other bishops, this body seeks to provide support and guidance to further enhance Catholic Leadership Institute&#39;s leadership formation programs serving bishops, priests and lay faithful throughout the country.