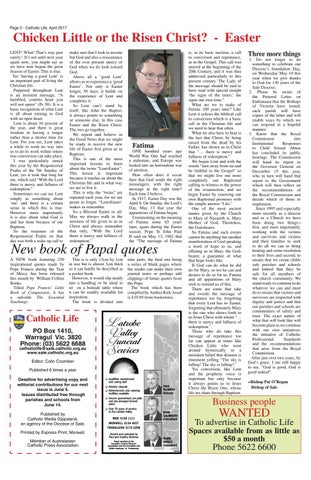 Chicken Little or the Risen Christ? - Easter LENT! What! That’s way past surely!. It’s not until next year again now, you might say as we have now begun the great Season of Easter. This is true. Yet ‘having a good Lent’ is an important part of living the Christian life. Peppered throughout Lent is an insistent message, “A humbled, contrite heart you will not spurn” (Ps 50). It is a basic recognition of what Lent is all about turning to God with an open heart. Lent is about 10 percent of the year, and there is great wisdom in having a longer rather than a shorter time for Lent. For you see, Lent takes a while to work its way into us to do its work within where true conversion can take place. I was particularly struck this year by the Responsorial Psalm of the 5th Sunday of Lent, yes it took that long for me, which said “With the Lord there is mercy and fullness of redemption.” Sometimes we can see Lent simply as something about ‘me’ and there is a certain sense in which this is true. However more importantly it is also about what God is and has done because of our Baptism. So the response of the Responsorial Psalm on that day was both a wake up call to

make sure that I look to no-one but God and also a reassurance of the ever present mercy of God when we do look toward God. Above all a ‘good Lent’ allows us to experience a ‘good Easter’. Not only is Easter longer, 50 days, it builds on the experience of Lent and completes it. So Lent can’t stand by itself; like John the Baptist, it always points to something or someone else, in this case Easter and the Risen Christ. The two go together. We repent and believe in the Good News that we might be ready to receive the new life of Easter first given us in Baptism. This is one of the most important lessons to learn about the twins “Lent-Easter”. This lesson is important because it teaches us about the Christian life and in what way we are to live it. This is why the “twins” are repeated each year, for we are prone to forget. “Lent-Easter’ makes us remember. So a Blessed Easter to all. May we always walk in the newness of life given to us in Christ and always remember that only, “With the Lord there is mercy and fullness of redemption.”

Fatima ONE hundred years ago World War One had reached a stalemate, and Europe was locked into an horrendous war of attrition. How often does it occur then that God sends the right messengers, with the right message at the right time? Each time I believe. In 1917, Easter Day was the April 8. On Sunday, the Lord’s Day, May 13 that year the apparitions of Fatima began. Commenting on the meaning of Fatima some 65 years later, again during the Easter season, Pope St John Paul II said on May 13, 1982 that the “The message of Fatima

New book of Papal quotes A NEW book featuring 250 inspirational quotes made by Pope Francis during the Year of Mercy has been released this month by William Collins Books. Titled Pope Francis’ Little Book of Compassion, it has a sub-title The Essential Teachings.

This is is only 13cm by 1cm in size but is almost 3cm thick so it can hardly be described as a pocket book. However, it would slip neatly into a handbag or be ideal to sit on a bedside table where it can be readily available for inspiration. The book is divided into

nine parts, the final one being a series of blank pages where the reader can make their own journal notes or perhaps add clippings of future quotes from the Pope. The book which has been compiled by Andrea Kirk Assaf is $19.99 from bookstores.

Editor: Colin Coomber Published 6 times a year Deadline for advertising copy and editorial contributions for our next issue is June 5. Issues distributed free through parishes and schools from June 14. Published by Catholic Media Gippsland, an agency of the Diocese of Sale. Printed by Express Print, Morwell. Member of Australasian Catholic Press Association

Three more things 1. Do not forget to do something to celebrate our Diocese’s foundation Day, on Wednesday May 10 this year when we give thanks to God for 130 years of the Sale Diocese; 2. Please be aware of the Pastoral Letter on Euthanasia that the Bishops of Victoria have issued, each parish will have copies of the letter and will enable ways by which we can respond in a hopeful manner; 3. Know that the Royal Commission into Institutional Responses to Child Sexual Abuse has concluded its public hearings. The Commission will hand its report to the Governor General on December 15 this year, who in turn will hand that report to the Government which will then reflect on the recommendations of the Royal Commission and decide which of those to implement. Since 1995 and especially more recently as a diocese and as a Church we have been doing two things:first, and most importantly, working with the victims and survivors and victims and their families to seek to do all we can to bring healing and some resolution to their lives and second, to ensure that we create childsafe parishes and schools and indeed that they be safe for all members of the church community. We stand ready to continue to do whatever we can and must do to ensure that victims and survivors are respected with dignity and justice and that our parishes and schools are communities of safety and trust. The exact nature of what that will look like will become plain as we continue with our own initiatives; the initiative of Catholic Professional Standards and the recommendations that arise from the Royal Commission. After just over two years, by God’s grace, I am still happy to say, “God is good, God is good indeed”. +Bishop Pat O’Regan Bishop of Sale

is, in its basic nucleus, a call to conversion and repentance, as in the Gospel. This call was uttered at the beginning of the 20th Century, and it was thus addressed particularly to this present century. The Lady of the message should be said to have read with special insight ‘the signs of the times,’ the signs our own time.” What are we to make of Fatima 100 years later? Like Lent it echoes the biblical call to conversion which is a basic call in the Christian life and we need to hear that often. What we also have to hear is the fact that Christ, by being raised from the dead by his Father, has shown us in Christ that “… there is mercy and fullness of redemption.” We began Lent and with the words “turn away from sin and be faithful to the Gospel” so that we might live out more completely our Baptismal calling to witness to the power of the resurrection, and we begin Easter by renewing our own Baptismal promises with the simple answer “I do.” One of the most ancient names given by the Church to Mary of Nazareth is, Mary Mother of God, Theotokos, the God-bearer. So Fatima and such events cannot be anything but another manifestation of God speaking a word of hope to us, and offering us in Mary, the Godbearer, a guarantee of what that hope looks like. If God can do what he did do for Mary, so too he can and desires to do so for us. Fatima and all apparitions of Mary seek to remind us of this. There are some that take and overdo the message of repentance too far, forgetting that every Lent has its Easter, forgetting that ultimately Mary is the one who shows forth to us Jesus Christ with whom “… there is mercy and fullness of redemption.”. Those who do take this message of repentance too far can appear at times like Chicken Little who went around hysterically in a mistaken belief that disaster is imminent yelling “The sky is falling! The sky is falling!.” Yes conversion, like Lent and the prophetic voice is important but only because it always points us to Jesus Christ the Risen One, whose life we share through Baptism.

April 2017 issue of publication of Catholic Diocese of Sale, Australia 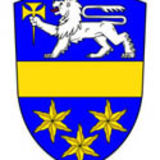