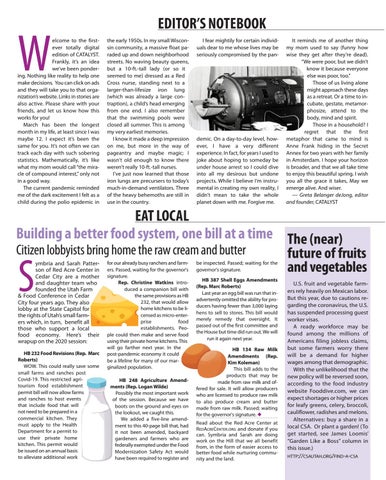 elcome to the firstever totally digital edition of CATALYST. Frankly, it’s an idea we’ve been pondering. Nothing like reality to help one make decisions. You can click on ads and they will take you to that organization’s website. Links in stories are also active. Please share with your friends, and let us know how this works for you! March has been the longest month in my life, at least since I was maybe 12. I expect it’s been the same for you. It’s not often we can track each day with such sobering statistics. Mathematically, it’s like what my mom would call “the miracle of compound interest,” only not in a good way. The current pandemic reminded me of the dark excitement I felt as a child during the polio epidemic in

EDITOR’S NOTEBOOK the early 1950s. In my small Wisconsin community, a massive float paraded up and down neighborhood streets. No waving beauty queens, but a 10-ft.-tall lady (or so it seemed to me) dressed as a Red Cross nurse, standing next to a larger-than-lifesize iron lung (which was already a large contraption), a child’s head emerging from one end. I also remember that the swimming pools were closed all summer. This is among my very earliest memories. I know it made a deep impression on me, but more in the way of pageantry and maybe magic; I wasn’t old enough to know there weren’t really 10-ft.-tall nurses. I’ve just now learned that those iron lungs are precursers to today’s much-in-demand ventilators. Three of the heavy behemoths are still in use in the country.

demic. On a day-to-day level, however, I have a very different experience. In fact, for years I used to joke about hoping to someday be under house arrest so I could dive into all my desirous but undone projects. While I believe I’m instrumental in creating my own reality, I didn’t mean to take the whole planet down with me. Forgive me.

It reminds me of another thing my mom used to say (funny how wise they get after they’re dead). “We were poor, but we didn’t know it because everyone else was poor, too.” Those of us living alone might approach these days as a retreat. Or a time to incubate, gestate, metamorphosize, attend to the body, mind and spirit. Those in a household? I regret that the first metaphor that came to mind is Anne Frank hiding in the Secret Annex for two years with her family in Amsterdam. I hope your horizon is broader, and that we all take time to enjoy this beautiful spring. I wish you all the grace it takes, May we emerge alive. And wiser. — Greta Belanger deJong, editor and founder, CATALYST

EAT LOCAL Building a better food system, one bill at a time The (near) Citizen lobbyists bring home the raw cream and butter future of fruits and vegetables

ymbria and Sarah Patterson of Red Acre Center in Cedar City are a mother and daughter team who founded the Utah Farm &amp; Food Conference in Cedar City four years ago. They also lobby at the State Capitol for the rights of Utah’s small farmers which, in turn, benefit all those who support a local food economy. Here’s their wrapup on the 2020 session:

HB 232 Food Revisions (Rep. Marc Roberts) WOW. This could really save some small farms and ranches post Covid-19. This restricted agritourism food establishment permit bill will now allow farms and ranches to host events that include food that will not need to be prepared in a commercial kitchen. They must apply to the Health Department for a permit to use their private home kitchen. This permit would be issued on an annual basis to alleviate additional work

for our already busy ranchers and farmers. Passed, waiting for the governor&#39;s signature. Rep. Christine Watkins introduced a companion bill with the same provisions as HB 232, that would allow home kitchens to be licensed as micro-enterprise food establishments. People could then make and serve food using their private home kitchens. This will go farther next year. In the post-pandemic economy it could be a lifeline for many of our marginalized population. HB 248 Agriculture Amendments (Rep. Logan Wilde) Possibly the most important work of the session. Because we have boots on the ground and eyes on the lookout, we caught this. We added a five-line amendment to this 40-page bill that, had it not been amended, backyard gardeners and farmers who are federally exempted under the Food Modernization Safety Act would have been required to register and

be inspected. Passed; waiting for the governor&#39;s signature.

HB 387 Shell Eggs Amendments (Rep. Marc Roberts) Last year an egg bill was run that inadvertently omitted the ability for producers having fewer than 3,000 laying hens to sell to stores. This bill would merely remedy that oversight. It passed out of the first committee and the House but time did run out. We will run it again next year. HB 134 Raw Milk Amendments (Rep. Kim Koleman) This bill adds to the products that may be made from raw milk and offered for sale. It will allow producers who are licensed to produce raw milk to also produce cream and butter made from raw milk. Passed; waiting for the governor&#39;s signature. ◆ Read about the Red Acre Center at REDACRECENTER.ORG and donate if you can. Symbria and Sarah are doing work on the Hill that we all benefit from, in the form of easier access to better food while nurturing community and the land.

U.S. fruit and vegetable farmers rely heavily on Mexican labor. But this year, due to cautions regarding the coronavirus, the U.S. has suspended processing guest worker visas. A ready workforce may be found among the millions of Americans filing jobless claims, but some farmers worry there will be a demand for higher wages among that demographic. With the unlikelihood that the new policy will be reversed soon, according to the food industry website Fooddive.com, we can expect shortages or higher prices for leafy greens, celery, broccoli, cauliflower, radishes and melons. Alternatives: buy a share in a local CSA. Or plant a garden! (To get started, see James Loomis’ “Garden Like a Boss” column in this issue.) HTTP://CSAUTAH.ORG/FIND-A-CSA 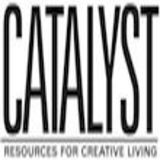