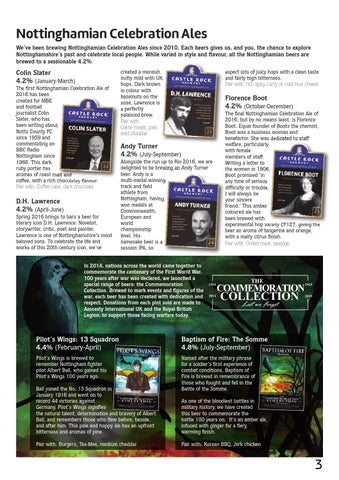 Colin Slater 4.2% (January-March) The first Nottinghamian Celebration Ale of 2016 has been created for MBE and football journalist Colin Slater, who has been writing about Notts County FC since 1959 and commentating on BBC Radio Nottingham since 1968. This dark ruby porter has aromas of roast malt and coffee, with a rich chocolatey flavour. Pair with: Coffee cake, dark chocolate

D.H. Lawrence 4.2% (April-June) Spring 2016 brings to bars a beer for literary icon D.H. Lawrence. Novelist, storywriter, critic, poet and painter, Lawrence is one of Nottinghamshire’s most beloved sons. To celebrate the life and works of this 20th century icon, we’ve

created a moreish nutty mild with UK hops. Dark brown in colour with hazelnuts on the nose, Lawrence is a perfectly balanced brew. Pair with: Game meats, pies, mild cheddar

Andy Turner 4.2% (July-September) Alongside the run up to Rio 2016, we are delighted to be brewing an Andy Turner beer. Andy is a multi-medal winning track and field athlete from Nottingham, having won medals at Commonwealth, European and world championship level. His namesake beer is a session IPA, so

The final Nottinghamian Celebration Ale of 2016, but by no means least, is Florence Boot. Equal founder of Boots the chemist, Boot was a business woman and benefactor. She was dedicated to staff welfare, particularly with female members of staff. Writing a letter to the women in 1906, Boot promised ‘in any time of serious difficulty or trouble, I will always be your sincere friend.’ This amber coloured ale has been brewed with experimental hop variety CF127, giving the beer an aroma of tangerine and orange, with a malty citrus finish. Pair with: Grilled meat, sausage

In 2014, nations across the world came together to commemorate the centenary of the First World War. 100 years after war was declared, we launched a special range of beers: the Commemoration Collection. Brewed to mark events and figures of the war, each beer has been created with dedication and respect. Donations from each pint sold are made to Amnesty International UK and the Royal British Legion, to support those facing warfare today.

Baptism of Fire: The Somme 4.8% (July-September)

Named after the military phrase for a soldier’s first experience of combat conditions, Baptism of Fire is brewed in remembrance of those who fought and fell in the Battle of the Somme.

Ball joined the No. 13 Squadron in January 1916 and went on to record 44 victories against Germany. Pilot’s Wings signifies the natural talent, determination and bravery of Albert Ball, and remembers those who flew before, beside, and after him. This pale and hoppy ale has an upfront bitterness and aromas of pine. Pair with: Burgers, Tex-Mex, medium cheddar

As one of the bloodiest battles in military history, we have created this beer to commemorate the battle 100 years on. It’s an amber ale, infused with ginger for a fiery, warming finish. Pair with: Korean BBQ, Jerk chicken 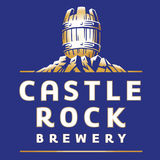