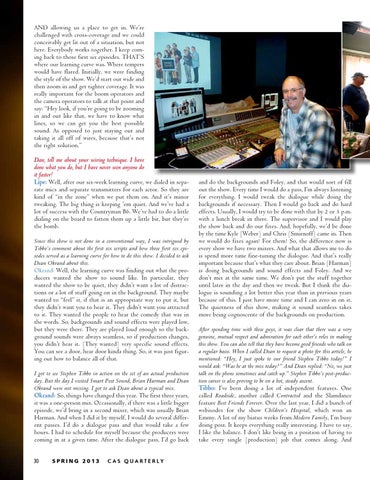 AND allowing us a place to get in. We’re challenged with cross-coverage and we could conceivably get lit out of a situation, but not here. Everybody works together. I keep coming back to those first six episodes. THAT’S where our learning curve was. Where tempers would have flared. Initially, we were finding the style of the show. We’d start out wide and then zoom in and get tighter coverage. It was really important for the boom operators and the camera operators to talk at that point and say: “Hey look, if you’re going to be zooming in and out like that, we have to know what lines, so we can get you the best possible sound. As opposed to just staying out and taking it all off of wires, because that’s not the right solution.” Dan, tell me about your wiring technique. I have done what you do, but I have never seen anyone do it faster! Lipe: Well, after our six-week learning curve, we dialed in separate mics and separate transmitters for each actor. So they are kind of “in the zone” when we put them on. And it’s minor tweaking. The big thing is keeping ’em quiet. And we’ve had a lot of success with the Countryman B6. We’ve had to do a little dialing on the board to fatten them up a little bit, but they’re the bomb.

Since this show is not done in a conventional way, I was intrigued by Tibbo’s comment about the first six scripts and how those first six episodes served as a learning curve for how to do this show. I decided to ask Dean Okrand about this. Okrand: Well, the learning curve was finding out what the producers wanted the show to sound like. In particular, they wanted the show to be quiet, they didn’t want a lot of distractions or a lot of stuff going on in the background. They maybe wanted to “feel” it, if that is an appropriate way to put it, but they didn’t want you to hear it. They didn’t want you attracted to it. They wanted the people to hear the comedy that was in the words. So, backgrounds and sound effects were played low, but they were there. They are played loud enough so the background sounds were always seamless, so if production changes, you didn’t hear it. [They wanted] very specific sound effects. You can see a door, hear door kinda thing. So, it was just figuring out how to balance all of that. I got to see Stephen Tibbo in action on the set of an actual production day. But the day I visited Smart Post Sound, Brian Harman and Dean Okrand were not mixing. I got to ask Dean about a typical mix. Okrand: So, things have changed this year. The first three years, it was a one-person mix. Occasionally, if there was a little bigger episode, we’d bring in a second mixer, which was usually Brian Harman. And when I did it by myself, I would do several different passes. I’d do a dialogue pass and that would take a few hours. I had to schedule for myself because the producers were coming in at a given time. After the dialogue pass, I’d go back 30

and do the backgrounds and Foley, and that would sort of fill out the show. Every time I would do a pass, I’m always listening for everything. I would tweak the dialogue while doing the backgrounds if necessary. Then I would go back and do hard effects. Usually, I would try to be done with that by 2 or 3 p.m. with a lunch break in there. The supervisor and I would play the show back and do our fixes. And, hopefully, we’d be done by the time Kyle [Weber] and Chris [Smirnoff] came in. Then we would do fixes again! For them! So, the difference now is every show we have two mixers. And what that allows me to do is spend more time fine-tuning the dialogue. And that’s really important because that’s what they care about. Brian [Harman] is doing backgrounds and sound effects and Foley. And we don’t mix at the same time. We don’t put the stuff together until later in the day and then we tweak. But I think the dialogue is sounding a lot better this year than in previous years because of this. I just have more time and I can zero in on it. The quietness of this show, making it sound seamless takes more being cognoscente of the backgrounds on production.

After spending time with these guys, it was clear that there was a very genuine, mutual respect and admiration for each other’s roles in making this show. You can also tell that they have become good friends who talk on a regular basis. When I called Dean to request a photo for this article, he mentioned: “Hey, I just spoke to our friend Stephen Tibbo today!” I would ask: “Was he at the mix today?” And Dean replied: “No, we just talk on the phone sometimes and catch up.” Stephen Tibbo’s post-production career is also proving to be on a hot, steady ascent. Tibbo: I’ve been doing a lot of independent features. One called Roadside, another called Contracted and the Slamdance feature Best Friends Forever. Over the last year, I did a bunch of webisodes for the show Children’s Hospital, which won an Emmy. A lot of my hiatus weeks from Modern Family, I’m busy doing post. It keeps everything really interesting. I have to say, I like the balance. I don’t like being in a position of having to take every single [production] job that comes along. And

CAS Awards, Meet the Winners, Dolby Atmos on the Stage 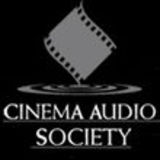