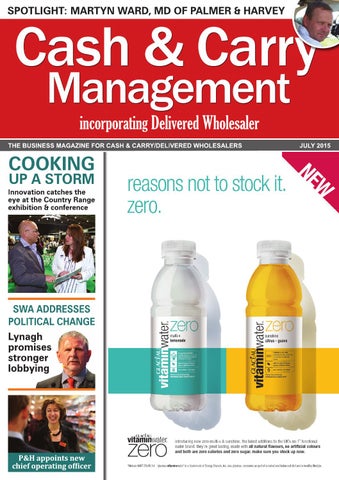 The UKâ&#x20AC;&#x2122;s third biggest standard tea brand* Continuing to grow with 700,000 new homes buying Yorkshire Tea in the last 12 months* Our range of price-marked packs are ideal for retailers to drive category value growth Investing ÂŁ8 million in marketing spend over the next 18 months

Did you know? One in five convenience shoppers say they would buy a PMP ‘every time or most times’ they visit a store, and 80% are more likely to repurchase a PMP.

All data unless otherwise stated: him!

Wholesaler’s perspective “Across the depot, I reckon price-marked packs make up 60-70% of our total range,” says Fida Hussain, general manager at Bestway Brighton. “We have been stocking a lot of price-marked lines for a considerable time now but over the last couple of years, price marking has grown massively and has gone absolutely mad. Up until last year, we have been in a recession and many suppliers have been launching price-marked packs to help instil confidence in the end consumer. “There are so many cigarettes price marked, and many beer brands carry promotional offers on-pack such as ‘four for £5.99’. Price marking is even featuring on many grocery items now and my customers always seem to be requesting price-marked packs on specific lines. I can’t get enough of them. “Retailers seem to be more inclined to pick up pricemarked packs because they generate more turnover. There may be an element of less profit, but you can move stock quicker and have fewer problems with dates. “We do have some customers who adamantly and stringently refuse to take price-marked packs. People who own garages or shops in affluent areas, such as Brighton seafront, will not touch price-marked packs because they have a really high footfall and do not want to penalise themselves by lowering their margins. But shops located near council estates make their business from customers who are living on benefits, shop two or three times a day and perceive price-marked packs to offer value for money.”

“The £1 price point works really well on multipack confectionery, household products and toothpaste and shower gels, for example,” says John Kinney, retail director at Today’s. “The consumer is more aware of prices now than ever before, with easy access to price-comparison sites and strong price wars all over the media. “An attractive consumer retail price point must also allow for a sustainable profit margin for both the retailer and wholesaler. It’s not just about getting a good price for the consumer – the price has to work for all parties.” Although some shopkeepers remain unconvinced about price marking, 37% of retailers admitted in a him! survey that the availability of price-marked packs had a strong influence over their choice of wholesaler. Susan Nash, trade communications manager at Mondelez International, acknowledges that one of the biggest difficulties for wholesalers is ensuring that every retail customer notices a PMP or promotional offer. Nash recommends using a secondary PoS display in a high traffic area to enhance visibility and maximise disruption. Research shows that 60% of retailers have a set routine when they shop for confectionery in depot. Nash continues: “When it comes to your PMP range, there are a number of other variables to take into consideration. These include product format, product category, unit price, customer profile, seasonality, frequency of purchase and store environment. “PMPs are a type of promotion, so retailers should be advised to consider how much of their stock they want to be perceived as ‘on promotion’.” As a result, Nash urges wholesalers to liaise with their customers to check that the PMP price doesn’t undermine another promotion, such as meal deals, which could confuse or – even worse – mislead the end consumer.

FROM OUR PRICE MARKED PACKS

The UKâ&#x20AC;&#x2122;s third biggest standard tea brand* Continuing to grow with 700,000 new homes buying Yorkshire Tea in the last 12 months* Our range of price-marked packs are ideal for retailers to drive category value growth Investing ÂŁ8 million in marketing spend over the next 18 months

[ DAIRY ] FrieslandCampina celebrates top award Yazoo Yogurt Smoothie has been named Best Dairy Drink at the World Dairy Innovation Awards 2015. Manufactured using a blend of yoghurt, fruit and gluten-free oats, the Strawberry & Raspberry and Mango & Pineapple variants have become a key driver of the fast growing dairy smoothie category, up 182% in value since the range was launched in April last year.

All data unless otherwise stated: IRI

Milking new opportunities Over the past year, the chilled and dairy market has grown by 7.6% in the convenience channel and is now valued at £66.4 million (Nielsen). The trend towards shopping ‘little and often’ also means that consumers are increasingly using small stores to top up on traditional grocery items, such as butters and cheeses. With so many shopper missions to cater for, retailers continue to seek a selection of block, grated and sliced cheeses that fulfil numerous meal applications. As the UK’s leading cheese brand, which is purchased by more than one in two British households (Kantar), Cathedral City’s Mature (350g), Extra Mature (200g) and Lighter Mature (350g) variants should be considered “must-stock SKUs” for wholesalers, claims Amy Fisher, central shopper marketing manager at brand owner Dairy Crest. Despite holding a 53% share of the total cheese category, private label is bought by only a quarter of shoppers in symbols and independents (IGD). On the flip side, branded cheese has 17% higher loyalty in convenience (Kantar). Appealing to children and kids alike, Cathedral City’s portfolio also includes a variety of pre-portioned products that are ideal for lunchboxes or on-the-go consumption. Cathedral City’s Selections, which contains individuallywrapped portions of cheddar cheese, has a 17% share of the adult cheese category, while Cathedral City Chedds is growing by 12% year on year in the kids cheese segment. Brand loyalty is particularly prominent in the dairy industry and Mondelez International is rewarding customers by running its longest-ever on-pack promotion on Dairylea Tubs, Stripcheese, Lunchables and single and multipacks of Dairylea Dunkers. As part of the scheme, Mondelez is giving away 100

Stat attack: Dairy products were the second most frequently purchased item in the convenience sector in 2014 (Mintel).

Dairylea Moo-ing Racer cows – a four-strong range of collectable toys – every day until 31 October. The campaign is part of a £11 million marketing investment by Mondelez in promoting its core cheese brands this year. Philadelphia, the UK’s leading soft white cheese brand (Nielsen), has received the bulk of this media spend (£10 million), and continues to engage with customers through TV advertising and digital and social activity. Similarly, Arla Foods has ploughed £6 million into a new Anchor Cheddar marketing campaign. Spearheaded by an animated TV creative, the ‘Rich Anchor Cheddar, That’s The Good Stuff’ campaign is supplemented by video on demand, outdoor advertising, in-store sampling and digital promotions. The activity, which concludes at the end of August, follows a £7 million investment by Arla Foods in a ‘Go Freestyle’ with Lurpak Spreadable campaign in April. Taking a different approach, Müller Wiseman Dairies has released its first 250g packs of butter for the foodservice and retail sectors. Packed in its own distinctive black and white packaging, the salted and unsalted variants (rsp £1.49) meet demand for produce with provenance and are made with milk from Red Tractor-approved British farms. Meanwhile, Dairy Crest has released a new range of pricemarked butter and spread packs, specifically for the convenience sector. Targeting shoppers on a top-up mission, new 250g packs of Utterly Butter are available in cases of eight and are pricemarked at £1. The 500g format has also been relaunched with a £1.89 price flash – down from £1.99 – and is obtainable in outers of eight. Neil Stewart, marketing manager of spreads at Dairy Crest, says: “Our PMPs not only provide a competitive price point, but the smaller case sizes also mean a lower outlay for CCM retailers.”