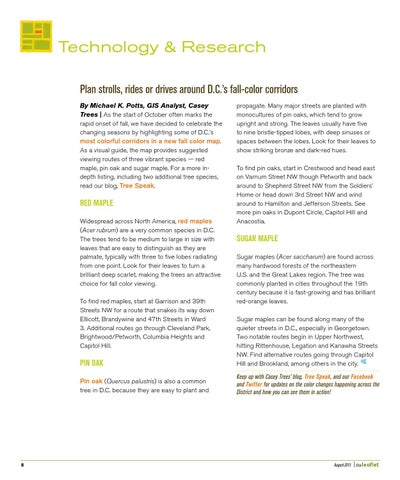 Technology & Research Plan strolls, rides or drives around D.C.’s fall-color corridors By Michael K. Potts, GIS Analyst, Casey Trees | As the start of October often marks the rapid onset of fall, we have decided to celebrate the changing seasons by highlighting some of D.C.’s most colorful corridors in a new fall color map. As a visual guide, the map provides suggested viewing routes of three vibrant species — red maple, pin oak and sugar maple. For a more indepth listing, including two additional tree species, read our blog, Tree Speak.

Red maple Widespread across North America, red maples (Acer rubrum) are a very common species in D.C. The trees tend to be medium to large in size with leaves that are easy to distinguish as they are palmate, typically with three to five lobes radiating from one point. Look for their leaves to turn a brilliant deep scarlet, making the trees an attractive choice for fall color viewing. To find red maples, start at Garrison and 39th Streets NW for a route that snakes its way down Ellicott, Brandywine and 47th Streets in Ward 3. Additional routes go through Cleveland Park, Brightwood/Petworth, Columbia Heights and Capitol Hill.

propagate. Many major streets are planted with monocultures of pin oaks, which tend to grow upright and strong. The leaves usually have five to nine bristle-tipped lobes, with deep sinuses or spaces between the lobes. Look for their leaves to show striking bronze and dark-red hues. To find pin oaks, start in Crestwood and head east on Varnum Street NW though Petworth and back around to Shepherd Street NW from the Soldiers’ Home or head down 3rd Street NW and wind around to Hamilton and Jefferson Streets. See more pin oaks in Dupont Circle, Capitol Hill and Anacostia.

Sugar maple Sugar maples (Acer saccharum) are found across many hardwood forests of the northeastern U.S. and the Great Lakes region. The tree was commonly planted in cities throughout the 19th century because it is fast-growing and has brilliant red-orange leaves.

Sugar maples can be found along many of the quieter streets in D.C., especially in Georgetown. Two notable routes begin in Upper Northwest, hitting Rittenhouse, Legation and Kanawha Streets NW. Find alternative routes going through Capitol Hill and Brookland, among others in the city.

Pin oak (Quercus palustris) is also a common tree in D.C. because they are easy to plant and

Keep up with Casey Trees’ blog, Tree Speak, and our Facebook and Twitter for updates on the color changes happening across the District and how you can see them in action! 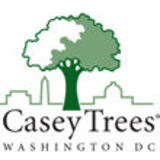