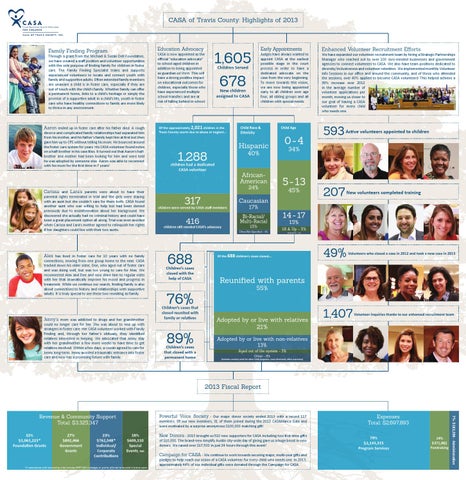 CASA of Travis County: Highlights of 2013

Through a grant from the Michael & Susan Dell Foundation, we have created a staff position and volunteer opportunities with the sole purpose of finding family for children in foster care. The Family Finding Specialist trains and supports experienced volunteers to locate and connect youth with family and supportive adults. Often extended family members are unaware a child is in foster care, especially if they are out of touch with the child’s family. Whether family can offer a permanent home, links to a child’s heritage or simply the promise of a supportive adult in a child’s life, youth in foster care who have healthy connections to family are more likely to thrive in any environment.

Aaron ended up in foster care after his father died. A rough

divorce and complicated family relationships had separated him from his mother, and his father’s family kept him at first but then gave him up to CPS without telling his mom. He bounced around the foster care system for years. His CASA volunteer found notes on a half-brother in his case files. It turned out that Aaron’s halfbrother and mother had been looking for him and were told he was adopted by someone else. Aaron was able to reconnect with his mom for the first time in 7 years!

Carissa and Lara’s parents were about to have their

parental rights terminated in trial and the girls were staying with an aunt but she couldn’t care for them both. CASA found another aunt who was willing to help but had been denied previously due to misinformation about her background. We discovered she actually had no criminal history and could have been a great placement option all along. Trial was even avoided when Carissa and Lara’s mother agreed to relinquish her rights if her daughters could live with their two aunts.

connections, moving from one group home to the next. CASA tracked down his older sister, Dee, who aged out of foster care and was doing well, but was too young to care for Alex. We reconnected Alex and Dee and now drive him to regular visits with her that dramatically improve his mood and progress in treatment. While we continue our search, finding family is also about connections to history and relationships with supportive adults. It is truly special to see these two reuniting as family.

Jenny’s mom was addicted to drugs and her grandmother

could no longer care for her. She was about to end up with strangers in foster care. Her CASA volunteer worked with Family Finding and, through her father’s obituary, they identified relatives interested in helping. We advocated that Jenny stay with her grandmother a few more weeks to have time to get relatives involved. Within a few days, a cousin agreed to care for Jenny long-term. Jenny avoided a traumatic entrance into foster care and now has a promising future with family.

CASA is now appointed as the official “education advocate” to school-aged children in addition to being appointed as guardian ad litem. This will have a strong positive impact on educational outcomes for children, especially those who have experienced multiple school transfers and are at risk of falling behind in school.

Judges have always wanted to appoint CASA at the earliest possible stage in the court process in order to have a dedicated advocate on the case from the very beginning. To move towards this vision, we are now being appointed early to all children over age four, all sibling groups and all children with special needs.

Of the approximately 2,021 children in the Travis County courts due to abuse or neglect...

Children’s cases that closed reunited with family or relatives

Children’s cases that closed with a permanent home

We have expanded our volunteer recruitment team by hiring a Strategic Partnerships Manager who reached out to over 100 civic-minded businesses and government agencies to connect volunteers to CASA. We also have team positions dedicated to diversity/inclusiveness and volunteer retention. We implemented monthly Volunteer Info Sessions in our office and around the community, and of those who attended the sessions, over 40% applied to become CASA volunteers! This helped achieve a 38% increase over 2012 in the average number of volunteer applications per month, moving us closer to our goal of having a CASA volunteer for every child who needs one.

children had a dedicated CASA volunteer

Children’s cases closed with the help of CASA

Adopted by or live with relatives 21%

Volunteer inquiries thanks to our enhanced recruitment team

*In accordance with accounting rules includes $597,310 in pledges or grants of funds to be paid in future years.

Campaign for CASA - We continue to work towards securing major, multi-year gifts and

pledges to help reach our vision of a CASA volunteer for every child who needs one. In 2013, approximately 44% of our individual gifts were donated through the Campaign for CASA.

Thank you! You made 2013 a year of innovative advocacy and important initiatives for children and families.

These passionate, committed individuals care deeply about CASA’s mission and provided one or more children with a CASA volunteer for a whole year through their gifts of $1,500 or more.

And just as you would do for your own family, when a problem is identified, you get in there early to help them fix it. If your family is falling behind in school, you advocate for their needs and help them catch up. We built upon this notion to further improve our advocacy by agreeing to be appointed as “education advocates” for school-aged children.

Also in 2013 we dedicated ourselves to growing the CASA “family” in order to speak up for more of our community’s children. We grew our volunteer recruitment team and increased our fundraising efforts to bring in more volunteers and more supporters like you who believe in the power of CASA to make a difference for children.

As I always say to new volunteers in training at CASA 101, “Now you’re part of the CASA family.” Family is really, in one way or another, at the heart of everything we do at CASA. Thank you for your support in growing our family tree in 2013.

We proudly launched our Family Finding program with the support of the Michael & Susan Dell Foundation. With a dedicated staff specialist and volunteers training each month, we’re looking at family trees in a way we never have before. Through Family Finding we can tremendously improve the futures of children who’ve been stuck in foster care for years and help other children avoid lengthy stays in the system.

The donors highlighted in blue above also have current pledges of gifts over multiple years in support of our vision of serving every child in need in our community.

In 2013, these donors gave substantial gifts of products or services:

Endowment Donors In 2012, we established the CASA Endowment for Children to provide a permanent source of revenue for the future. The Austin Community Foundation helped us launch the endowment by issuing a challenge for us to raise $20,000 each year for four years and is providing matching funds. The following donors have given $250 or more to the endowment since 2012: Bonita Griffith & David Chasis Ruth & Patrick Doane Ila & John Falvey Leigh Gump

Mission CASA of Travis County exists to promote and protect the best interest of children who have been abused or neglected, by training volunteers to advocate for them in courts, in schools and in our community to help them find safe, permanent and loving homes.

Vision For every child who needs us, CASA of Travis County envisions a trained volunteer advocate, a safe home and a promising future. Thank you! You made 2013 a year of innovative advocacy and important initiatives for children and families. Please enjoy reading our Annual...

Thank you! You made 2013 a year of innovative advocacy and important initiatives for children and families. Please enjoy reading our Annual...