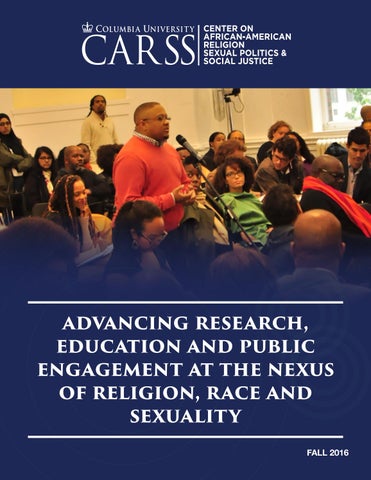 advancing research, education and public engagement at the nexus of religion, race and sexuality FALL 2016

From the Director Dear Friends: It is my pleasure to greet you as you are receiving the first of what will be an occasional newsletter published by CARSS—the Center on AfricanAmerican Religion, Sexual Politics and Social Justice at Columbia University. In this brief note, I want to introduce you to CARSS’s work and to orient you to what you will find on the following pages. Mission First, allow me to share a few general details about CARSS’s work. Founded in the Spring of 2013, CARSS’s mission is to advance research, education and public engagement at the intersections of religion, race and sexuality. Our focus, in particular, is on facilitating a critical engagement with both religion and sexual politics in black communities in the United States, but also with an eye to the wider African diaspora. We foster such engagements by partnering with scholars, religious leaders and activists; both within the Academy and in the context of local communities. Accomplishments It has, by all counts, been a busy and productive first three years. Most of our efforts during the first year were directed toward establishing the Josef Sorett, Founding Director center at Columbia and building community on campus and beyond. and Associate Professor of Religion With core staff and a team of advisors in place, CARSS began its public & African-American Studies programs in the Fall of 2014 with a major conference, Are the Gods Afraid of Black Sexuality?, which drew more than 200 attendees from across the nation. Then, in 2015, CARSS extended its work with a series of collaborations in five local communities around the country. In total, during our first three years, CARSS reached over 500 people with its academic and public programs. On the Horizon With the aim of learning from our first years and with an eye toward deepening and strengthening future work, CARSS wrapped up 2015 with an organizational assessment. In light of our findings, we adjusted our organizational structure to allow for more partnerships. Moving forward, we plan to continue our core public engagement work in additional communities. We are also strengthening our research and publishing agenda, which includes analyzing the data we’ve already collected, re-engaging with our Content Development Working Group, and launching an oral history project. Acknowledgements & Welcome At its core CARSS is an intellectual community that brings together scholars, activists and religious leaders to facilitate new kinds of conversations about religion, race and sexual politics. And our work is a reflection of the collective efforts and investments of many individuals and organizations. Accordingly, I want to offer a special thanks to Jennifer Leath, who has played an instrumental role in establishing CARSS and has now moved on to a tenure-track faculty position at the Iliff School of Theology. Additionally, I want to welcome several new collaborators: Carla Shedd and Mignon Moore will advise our research agenda; Nikki Young will co-lead our Content Development Working Group, and she is joined in this capacity by Brad Braxton, who has been a part of CARSS’s work since its founding; and Bishop Yvette Flunder will be helping us shape a new oral history initiative. We are proud of all that has been accomplished during these foundational years even as we are excited about the opportunities and important work that lies ahead. Thank you for following CARSS during these first few years and we appreciate your continued support.

Mission and Vision MISSION The Center on African American Religion, Sexual Politics and Social Justice (CARSS) advances research, education and public engagement at the nexus of religion, race and sexuality, in general, but with a particular focus on black communities, both in the United States and the wider African Diaspora. VISION As signaled in its name — the Center on African-American Religion, Sexual Politics and Social Justice (CARSS) — CARSS understands its work as situated at the intersections of religion, race and sexuality. African American Religion: CARSS recognizes the centrality of Christian churches in shaping public conversations in the United States, and the center’s history reflects the prominence of churches in American life, and within black communities. Furthermore, CARSS’ research and program agenda attends to the rich diversity of religious and spiritual communities, ideas, institutions, and practices that have shaped the past and continue to animate the social and cultural landscape of black communities in the twenty first century. Sexual Politics: CARSS begins its work with the assumption that discussions of gender and sexuality are necessarily linked, both when considering the cultural politics that organize black social and religious life and in accounting for the multiple ways in which black people participate in larger social debates on issues that range from marriage equality and mass incarceration to reproductive justice and economic inequality. Social Justice: In addition to developing research, educational and public engagement initiatives that examine the sexual politics that adhere in black religious and cultural life, CARSS is concerned with advancing programs that take serious the constraints and possibilities associated with the intersection of scholarship and activism, as well as the forms of knowledge that emerge therein. Moreover, CARSS conceives of the study of religion and sexual politics through an intersectional lens with an eye toward understanding how religion, race and sexuality together inform the conditions, limits, and possibilities of struggles for civil rights and for social justice in the twenty-first century.

PROGRAM RESEARCH CARSS produces and disseminates new knowledge concerning religion and sexual politics within black communities through collaborative and independent research initiatives. To this end, CARSS develops its own qualitative and quantitative studies, and provides support to individuals and organizations engaged in research and writing consistent with its mission and vision. EDUCATION CARSS serves as a resource for course and curriculum development (on and off campus) and for teaching resources on religion, race and sexuality. In this vein, CARSS sponsors courses, seminars, academic panels, and conferences. CARSS also serves as a clearinghouse and capacity-building resource for educators and organizations seeking to advance dialogue consistent with its goals. PUBLIC ENGAGEMENT By sponsoring workshops, think sessions and public forums, CARSS helps build the capacity of individuals and organizations (i.e. academic, religious, and â&#x20AC;&#x2DC;communitybased) seeking to advance conversations around religion, race and sexuality. Moreover, CARSS works to enrich and inform public conversations by placing scholars and local and national leaders in dialogue with cutting-edge scholarship to develop and disseminate more nuanced yet accessible narratives concerning religion, race and sexual politics.

CARSS Staff, Fellows, & Partners Since 2010 Derrick McQueen has played an integral role in the work that led to the grant-support and founding of CARSS. In 2016, Derrick received his Ph.D. in Homiletics and New Testament from Union Theological Seminary in New York City, where he also earned his Master of Divinity (2009) and served as the representative for VERITAS: The LGBTQ Initiative. Prior to that Derrick studied theater at Drew University and the built a successful career in the arts before returning to school at Union. Mr. McQueen has a longstanding track record of work for LGBTQ inclusion in churches and society, facilitating dialogues and serving on the boards of such organizations as Presbyterian Welcome, That All May Freely Serve, More Light Presbyterians and Auburn Seminary. During the 2015-16 year he also served as the Moderator of the Presbytery of New York City.

Columbia University’s Institute for Research in African-American Studies hosted a major conference, Are the Gods Afraid of Black Sexuality? Religion and the Burdens of Black Sexual Politics. This event also served as the public launch for the Center on African-American Religion, Sexual Politics and Social Justice. In terms of the richness of the presentations, and the level of attendance and engagement from attendees, Are the Gods Afraid of Black Sexuality? was a great success! We continue to receive positive feedback from colleagues, new and old, about the meaningful ways that the conference intervened in public dialogue and academic debates at once. With panels on campus, in Miller Theater and in Harlem’s First Corinthians Baptist Church, the conference placed artists, activists, leaders and scholars from across the nation (and beyond)—who work on a variety of issues, within a variety of fields, and in multiple contexts—in conversation in ways that were experienced as intellectually invigorating and politically engaging. In this regard, Are the Gods Afraid of Black Sexuality? extended IRAAS’s tradition of scholarship in service to social change. It also helped to set the course for CARSS’s ongoing commitment to advancing research, education and public engagement at the intersections of religion, race and sexuality within the specific context of black life. Special thanks to conference funders (Arcus Foundation, Carpenter Foundation and Ford Foundation) and on-campus cosponsors (The Office of the Provost, Institute for Religion, Culture and Public Life, University Chaplain’s Office, Institute for Research on Women, Gender and Sexuality, Office of Government and Community Affairs, Center for the Study of Ethnicity and Race, Center for Gender and Sexuality Law, Barnard Center for Research on Women, and Union Theological Seminary; as well as to IRAAS staff (Shawn Mendoza and Sharon Harris) and, especially, the conference organizing committee (Laura McTighe, Derrick McQueen and Jennifer Leath).

CARSS Highlights Through research, education and public engagement, facilitating and supporting dialogue is the core of CARSSâ&#x20AC;&#x2122;s work. We do this on Columbiaâ&#x20AC;&#x2122;s campus through hosting academic conferences, public programs and convenings, such as the 2015 Religious Exemptions and Racial Justice convening we co-sponsored with the Center for Gender and Sexuality Law and Union Theological Seminary. CARSS also does this through off-campus programs organized with community partners around the country. In the coming months, we look forward to collaborative work in Oakland, CA; Atlanta, GA; Charlotte & Raleigh-Durham, NC, and Dallas, TX; and we are excited to launch a new speaker series at Columbia beginning in the Fall of 2017. Below are just a few of the events we with hosted or co-sponsored during the past two years.

Black Lives and the Fullness Thereof The Fall 2016 Newsletter of CARSS Columbia, detailing our activities, mission, goals, and collaorators.

The Fall 2016 Newsletter of CARSS Columbia, detailing our activities, mission, goals, and collaorators.