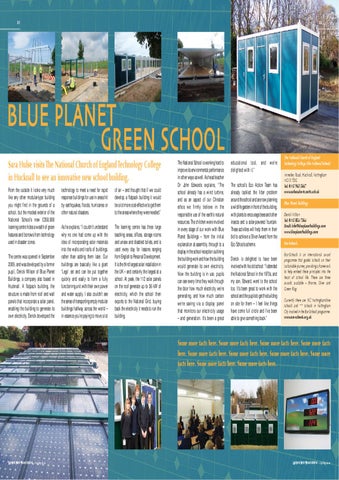 BLUE PLANET G R E E N S CHOOL Sara Hulse visits The National Church of England Technology College in Hucknall to see an innovative new school building. From the outside it looks very much like any other modular-type building you might find in the grounds of a school, but the modest exterior of the National School’s new £350,000 learning centre hides a wealth of green features and borrows from technology used in disaster zones. The centre was opened in September 2009, and was developed by a former pupil, Derick Wilson of Blue Planet Buildings, a company also based in Hucknall. A flatpack building, the structure is made from roof and wall panels that incorporate a solar panel, enabling the building to generate its own electricity. Derick developed the

technology to meet a need for rapid response buildings for use in areas hit by earthquakes, floods, hurricanes or other natural disasters.

of air – and thought that if we could develop a flatpack building it would be a lot more cost-effective to get them to the areas where they were needed.”

As he explains, “I couldn’t understand why no one had come up with the idea of incorporating solar materials into the walls and roofs of buildings, rather than adding them later. Our buildings are basically like a giant ‘Lego’ set and can be put together quickly and easily to form a fully functioning unit with their own power and water supply. I also couldn’t see the sense of transporting empty modular buildings halfway across the world – in essence you’re paying to move a lot

The learning centre has three large teaching areas, offices, storage rooms and unisex and disabled toilets, and is used every day for lessons ranging from English to Personal Development. It is the third largest solar installation in the UK – and certainly the largest at a school. At peak, the 112 solar panels on the roof generate up to 36 kW of electricity, which the school then exports to the National Grid, buying back the electricity it needs to run the building.

The National School is working hard to improve its environmental performance in other ways as well. As head teacher Dr John Edwards explains, “The school already has a wind turbine, and as an aspect of our Christian ethos we firmly believe in the responsible use of the earth’s natural resources. The children were involved in every stage of our work with Blue Planet Buildings – from the initial explanation at assembly, through to a display in the school reception outlining the building work and how the building would generate its own electricity. Now the building is in use, pupils can see every time they walk through the door how much electricity we’re generating, and how much carbon we’re saving via a display panel that monitors our electricity usage – and generation. It’s been a great

educational tool, delighted with it.”

The school’s Eco Action Team has already tackled the litter problem around the school and are now planning a wildlife garden in front of the building, with plants to encourage bees and other insects and a solar-powered fountain. These activities will help them in their bid to achieve a Silver Award from the Eco Schools scheme. Derick is delighted to have been involved with his old school: “I attended the National School in the 1970s, and my son, Edward, went to the school too. It’s been great to work with the school and the pupils to get this building on site for them – I feel like things have come full circle and I’ve been able to give something back.”