Why are women still earning less than men? Women have made slow progress in attaining corporate executive roles, but once reaching that level, their pay is typically less than men in similar leadership positions, a new study reports. A paper from researcher Morningstar found the highest-paid women earn about 85 cents for every dollar their male counterparts earn. Though the difference has narrowed from roughly 82 cents reported in 2015, a continuing gender pay gap at the top reflects a systemic problem that company leaders need to address at every level of their organization, said Allison Nolan, managing director of Athena International Management Limited and author of the upcoming book, “Madam Chair.” “The gender pay gap is chronic in most industries, deeply ingrained and too often accepted,” Nolan said. “Talented and driven women who have risen in the ranks despite having a harder road than men deserve equal compensation, but often they get discouraged by the unfairness and gender bias. “Companies can only benefit by doing something about this persistent problem. Paying women fairly and equally will attract and retain more top talent,

strengthen the work culture by creating more trust, and cast a favorable light on your company that will attract customers. But closing the gender pay gap requires a bottom-to-top approach that makes equality a central part of the culture.” Nolan offers five ways leaders and their companies can completely close the gender pay gap: • Acknowledge the pay gaps. Nolan first suggests an in-company audit, done by a diverse team, to compare salaries of men and women in the same position, see where the gaps are and why, and then begin addressing the underlying reasons and permanent solutions. • Enact inclusive hiring practices. “How can you have enough female leaders being paid fairly if you have relatively few females being hired?” Nolan said. “If you want to build equity at every level of your company, inclusive hiring is where it starts. The problem is, recruiting processes often are gender-biased while relying too much on networks. To bring equity in hiring, some companies may require comprehensive training for leadership about how to eliminate bias.” • Prioritize gender fairness during management training. “To protect against gender bias, which in turn leads to unequal pay, it’s essential to train your

managers in a way that shows how gender bias impacts their decision-making,” Nolan said. “Establish company criteria to reduce bias from managers in performance reviews, raises, promotions, and staffing decisions.” • Train women for the C-Suite. Often, gender pay gaps are a trickle-down result of women having little or no female representation in corporate leadership. To change that, Nolan said, “Create an internal management training program and give your female employees a tangible, direct career track to the next level and to top leadership positions. Set quotas and a timeline for increasing women in senior positions.” • Ensure transparency. “The bottom line,” Nolan said, “is companies need to get to the point where equal pay for equal work is not an empty battle cry, but a reality. This happens by being transparent and people seeing the rewards – the money – after the inequity has been vetted. Tracking pay across gender, race, and other demographic details should be a continual process of due diligence. Discrepancies must be thoroughly addressed. Leaders should be clear about how the company determines compensation by position and what the salary ranges are.” On the web: https://athena.ky/

Pet Hall of Fame We are collecting the cutest photos of pets in southern Mecklenburg and western Union counties for Charlotte Media Group’s Pet Hall of Fame. Unlike other Hall of Fames, we plan on adding to it frequently. Email photos of your cute pets to justin@ cmgweekly.com or tag us on Facebook, Twitter or Instagram for consideration. We’ll recognize new inductees each week! Our social media handles are @mmhweekly, @southcltweekly, @ucweekly, @itncweekly and @weeklywaxhaw.

COUPON $1 off $5+ purchase One coupon per Customer

Winston Algood is a very distinguished gentleman. This can be vouched by his mother, Tracie W. Algood and his favorite auntie, Marilyn. Photo courtesy of Marilyn Williams 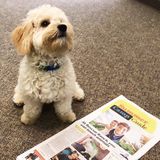