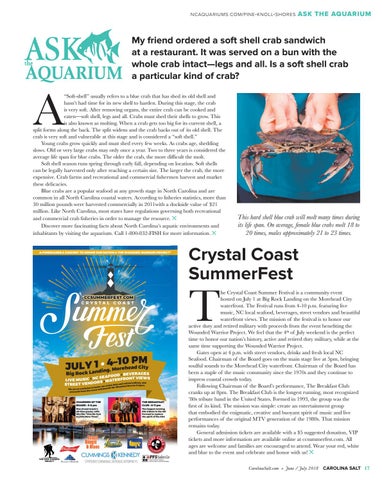 “Soft-shell” usually refers to a blue crab that has shed its old shell and hasn’t had time for its new shell to harden. During this stage, the crab is very soft. After removing organs, the entire crab can be cooked and eaten—soft shell, legs and all. Crabs must shed their shells to grow. This is also known as molting. When a crab gets too big for its current shell, a split forms along the back. The split widens and the crab backs out of its old shell. The crab is very soft and vulnerable at this stage and is considered a “soft shell.” Young crabs grow quickly and must shed every few weeks. As crabs age, shedding slows. Old or very large crabs may only once a year. Two to three years is considered the average life span for blue crabs. The older the crab, the more difficult the molt. Soft shell season runs spring through early fall, depending on location. Soft shells can be legally harvested only after reaching a certain size. The larger the crab, the more expensive. Crab farms and recreational and commercial fishermen harvest and market these delicacies. Blue crabs are a popular seafood at any growth stage in North Carolina and are common in all North Carolina coastal waters. According to fisheries statistics, more than 30 million pounds were harvested commercially in 2011with a dockside value of $21 million. Like North Carolina, most states have regulations governing both recreational and commercial crab fisheries in order to manage the resource. € Discover more fascinating facts about North Carolina’s aquatic environments and inhabitants by visiting the aquarium. Call 1-800-832-FISH for more information. € A FUNDRAISER & CONCERT TO HONOR OUR NATION & THE WOUNDED WARRIOR PROJECT®

This hard shell blue crab will molt many times during its life span. On average, female blue crabs molt 18 to 20 times, males approximately 21 to 23 times.

One of soul music’s all-time greats, with hits like “Give Me Just A Little More Time!”

The longest running 80s tribute in the US! Formed to capture the spirit of the 80s!

he Crystal Coast Summer Festival is a community event hosted on July 1 at Big Rock Landing on the Morehead City waterfront. The Festival runs from 4-10 p.m. featuring live music, NC local seafood, beverages, street vendors and beautiful waterfront views. The mission of the festival is to honor our active duty and retired military with proceeds from the event benefiting the Wounded Warrior Project. We feel that the 4th of July weekend is the perfect time to honor our nation’s history, active and retired duty military, while at the same time supporting the Wounded Warrior Project. Gates open at 4 p.m. with street vendors, drinks and fresh local NC Seafood. Chairman of the Board goes on the main stage live at 5pm, bringing soulful sounds to the Morehead City waterfront. Chairman of the Board has been a staple of the music community since the 1970s and they continue to impress coastal crowds today. Following Chairman of the Board’s performance, The Breakfast Club cranks up at 8pm. The Breakfast Club is the longest running, most recognized ’80s tribute band in the United States. Formed in 1993, the group was the first of its kind. The mission was simple: create an entertainment group that embodied the enigmatic, creative and buoyant spirit of music and live performances of the original MTV generation of the 1980s. That mission remains today. General admission tickets are available with a $5 suggested donation, VIP tickets and more information are available online at ccsummerfest.com. All ages are welcome and families are encouraged to attend. Wear your red, white and blue to the event and celebrate and honor with us! € CarolinaSalt.com » June / July 2018 CAROLINA SALT 17