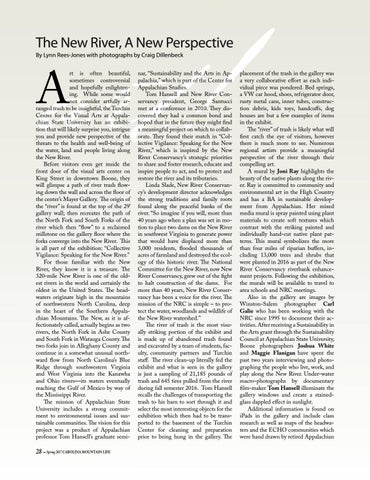 art! The New River, A New Perspective By Lynn Rees-Jones with photographs by Craig Dillenbeck

rt is often beautiful, sometimes controversial and hopefully enlightening. While some would not consider artfully arranged trash to be insightful, the Turchin Center for the Visual Arts at Appalachian State University has an exhibition that will likely surprise you, intrigue you and provide new perspective of the threats to the health and well-being of the water, land and people living along the New River. Before visitors even get inside the front door of the visual arts center on King Street in downtown Boone, they will glimpse a path of river trash flowing down the wall and across the floor of the center’s Mayer Gallery. The origin of the “river” is found at the top of the 29’ gallery wall; then recreates the path of the North Fork and South Forks of the river which then “flow” to a reclaimed millstone on the gallery floor where the forks converge into the New River. This is all part of the exhibition: “Collective Vigilance: Speaking for the New River.” For those familiar with the New River, they know it is a treasure. The 320-mile New River is one of the oldest rivers in the world and certainly the oldest in the United States. The headwaters originate high in the mountains of northwestern North Carolina, deep in the heart of the Southern Appalachian Mountains. The New, as it is affectionately called, actually begins as two rivers, the North Fork in Ashe County and South Fork in Watauga County. The two forks join in Alleghany County and continue in a somewhat unusual northward flow from North Carolina’s Blue Ridge through southwestern Virginia and West Virginia into the Kanawha and Ohio rivers—its waters eventually reaching the Gulf of Mexico by way of the Mississippi River. The mission of Appalachian State University includes a strong commitment to environmental issues and sustainable communities. The vision for this project was a product of Appalachian professor Tom Hansell’s graduate semi-

nar, “Sustainability and the Arts in Appalachia,” which is part of the Center for Appalachian Studies. Tom Hansell and New River Conservancy president, George Santucci met at a conference in 2010. They discovered they had a common bond and hoped that in the future they might find a meaningful project on which to collaborate. They found their match in “Collective Vigilance: Speaking for the New River,” which is inspired by the New River Conservancy’s strategic priorities to share and foster research, educate and inspire people to act, and to protect and restore the river and its tributaries. Linda Slade, New River Conservancy’s development director acknowledges the strong traditions and family roots found along the peaceful banks of the river. “So imagine if you will, more than 40 years ago when a plan was set in motion to place two dams on the New River in southwest Virginia to generate power that would have displaced more than 3,000 residents, flooded thousands of acres of farmland and destroyed the ecology of this historic river. The National Committee for the New River, now New River Conservancy, grew out of the fight to halt construction of the dams. For more than 40 years, New River Conservancy has been a voice for the river. The mission of the NRC is simple – to protect the water, woodlands and wildlife of the New River watershed.” The river of trash is the most visually striking portion of the exhibit and is made up of abandoned trash found and excavated by a team of students, faculty, community partners and Turchin staff. The river clean-up literally fed the exhibit and what is seen in the gallery is just a sampling of 21,185 pounds of trash and 645 tires pulled from the river during fall semester 2016. Tom Hansell recalls the challenges of transporting the trash to his barn to sort through it and select the most interesting objects for the exhibition which then had to be transported to the basement of the Turchin Center for cleaning and preparation prior to being hung in the gallery. The

placement of the trash in the gallery was a very collaborative effort as each individual piece was pondered. Bed springs, a VW car hood, shoes, refrigerator door, rusty metal cans, inner tubes, construction debris, kids toys, handcuffs, dog houses are but a few examples of items in the exhibit. The “river” of trash is likely what will first catch the eye of visitors, however there is much more to see. Numerous regional artists provide a meaningful perspective of the river through their compelling art. A mural by Joni Ray highlights the beauty of the native plants along the river. Ray is committed to community and environmental art in the High Country and has a BA in sustainable development from Appalachian. Her mixed media mural is spray painted using plant materials to create soft textures which contrast with the striking painted and individually hand-cut native plant patterns. This mural symbolizes the more than four miles of riparian buffers, including 13,000 trees and shrubs that were planted in 2016 as part of the New River Conservancy riverbank enhancement projects. Following the exhibition, the murals will be available to travel to area schools and NRC meetings. Also in the gallery are images by Winston-Salem photographer Carl Galie who has been working with the NRC since 1995 to document their activities. After receiving a Sustainability in the Arts grant through the Sustainability Council at Appalachian State University, Boone photographers Joshua White and Maggie Flanigan have spent the past two years interviewing and photographing the people who live, work, and play along the New River. Under-water macro-photographs by documentary film-maker Tom Hansell illuminate the gallery windows and create a stainedglass dappled effect in sunlight. Additional information is found on iPads in the gallery and include class research as well as maps of the headwaters and the ECHO communities which were hand drawn by retired Appalachian

Celebrating our 20th anniversary of featuring the heart and soul of the people and places in North Carolina's High Country (and neighbors!)