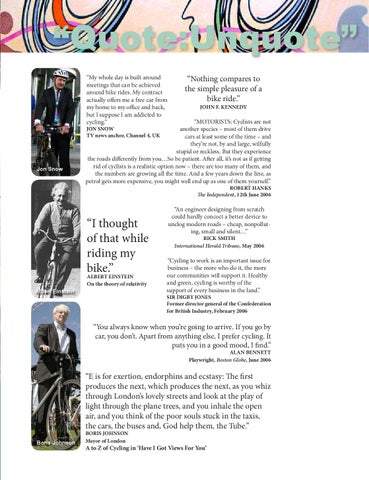 “My whole day is built around meetings that can be achieved around bike rides. My contract actually offers me a free car from my home to my office and back, but I suppose I am addicted to cycling.”

“Nothing compares to the simple pleasure of a bike ride.” JOHN F. KENNEDY

“MOTORISTS: Cyclists are not another species – most of them drive cars at least some of the time – and they’re not, by and large, wilfully stupid or reckless. But they experience the roads differently from you…So be patient. After all, it’s not as if getting rid of cyclists is a realistic option now – there are too many of them, and the numbers are growing all the time. And a few years down the line, as petrol gets more expensive, you might well end up as one of them yourself.” JON SNOW TV news anchor, Channel 4, UK

“I thought of that while riding my bike.” ALBERT EINSTEIN On the theory of relativity Albert Einstein

“Cycling to work is an important issue for business – the more who do it, the more our communities will support it. Healthy and green, cycling is worthy of the support of every business in the land.”

“You always know when you’re going to arrive. If you go by car, you don’t. Apart from anything else, I prefer cycling. It puts you in a good mood, I find.” ALAN BENNETT Playwright, Boston Globe, June 2006

“E is for exertion, endorphins and ecstasy: The first produces the next, which produces the next, as you whiz through London’s lovely streets and look at the play of light through the plane trees, and you inhale the open air, and you think of the poor souls stuck in the taxis, the cars, the buses and, God help them, the Tube.” Boris Johnson

50-page free preview from the 250+ page Bike to Work Book due to be published early in 2009. By Carlton Reid and Tim Grahl. 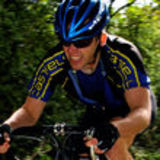