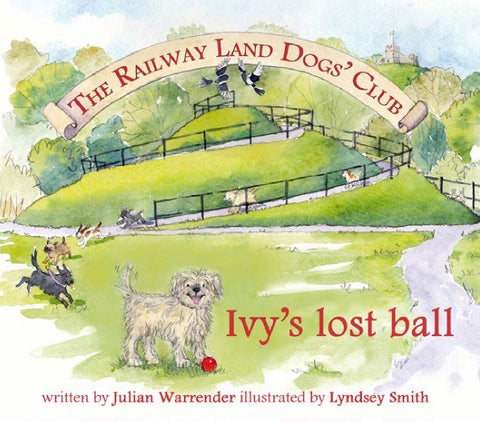 For all the friends Ivy and I meet on the Railway Land and Joan, Bill, Bridget and Phil, who have loved and cherished my beloved dogs with unconditional devotion and a sense of humour, thank you!

own by the river, on the outskirts of the town, alongside the old train track, The Railway Land Dogsâ&#x20AC;&#x2122; Club meets. Just around the corner lives a ruftytufty scruffy little dog called Ivy. She has smiley brown eyes and soft, feathery fur mottled in shades of grey, apricot and cream. Her favourite game is playing ball and she is happy 365 days of the year! Ivy and her friends are members of The Railway Land Dogsâ&#x20AC;&#x2122; Club.

Come rain or shine, the dogs meet at the Railway Land to play games and explore. They like to rag about amongst the watery meadows, which are bordered on one side by the river and on the other by winding paths and woodland. This is where Reggie the haughty heron fishes and cattle graze.

The meadows are criss-crossed by canals full of croaking marsh frogs â&#x20AC;&#x201C; gribit-gribit â&#x20AC;&#x201C; and edged by untidy tangles of blackberry bushes. The dogs snuffle in the scrubby thickets of elder, blackthorn and willow, and the timid moorhens hide in the swishy, swaying reeds.

Ivy is looking forward to playing with her new ball, but it is missing. It is an extra special present that she was given for her first birthday â&#x20AC;&#x201C; when she was seven (one year of a personâ&#x20AC;&#x2122;s life is equal to seven dog years!).

She has looked everywhere for her ball. Before she goes out, she searches one more time in all the usual places â&#x20AC;&#x201C; behind the sofa,

under the bed, in the log basket. It is nowhere to be found...

On Monday morning Ivy meets her best friend Ripley. Round and round, roly-poly, they tumble with delight!

Ripley is a stocky little Vallhund; her brave ancestors came over from Norway in long boats with the Vikings. Ripley likes it when the weather is cold and crisp, with snow and ice crusting the ground.

Ivy asks Ripley: “Please... have you seen my new ball?” “Nope, sorry Ivy, I haven’t seen your ball, but I will keep looking,” says Ripley

On Tuesday morning Ivy chases a hoop with Marmite, a bouncy, coal-black Collie cross with a very waggy tail and a fluffy bottom. Marmite can run faster than any other dog in the club.

Ivy asks Marmite: “Please... have you seen my new ball?” Marmite is too busy bouncing about to answer Ivy’s question. A beautifully illustrated children's book. Every weekday a rufty-tufty little dog called Ivy meets up with her friends; they are members of...

A beautifully illustrated children's book. Every weekday a rufty-tufty little dog called Ivy meets up with her friends; they are members of...