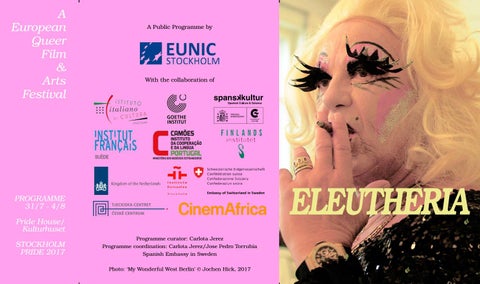 A Public Programme by

With the collaboration of

From the newest historical documentaries featured at this year’s Berlinale to LGBTQ+ cult classics, this year’s topic will reflect on the need to create a critical sense of LGBTQ+ memory and struggle in the face of today’s threats to LGBTQ+ rights as human rights.

‘I’m Every Lesbian’ is a city walk that presents fragments of a city’s lesbian history in a first person narrative. The work is a reflection on the ways in which the very personal experience can tell a larger story about social and political structures.

A portrait of the post-war homosexual movement in Zurich. The film revisits the story of the oldest homosexual network in Europe and delivers a remarkable portrait of the dramatic changes that occurred in Zurich – a liberal city during the postwar years, which later supported a more repressive type of society in the 1970s. - First release in Sweden - Winner, Best Documentary Teddy Award, 2014 Berlinale

Jochen Hick, Germany, 2017, 97’ Klarabiografen, 3 pm Free entrance - be on time! MY WONDERFUL WEST BERLIN recounts the lives and struggles of gay men in West-Berlin. Through present-day scenes and never before seen archival footage, a fascinating picture emerges of a city, that today characterizes itself as a dream destination and place of refuge for gays. - First release in Sweden - Featured in Berlinale 2017

In Madrid and in Paris, Boti, Empar, Micheline and Jocelyne, four lesbian women in their seventies, tell of their fears, their desires, their differences… They are still active, or activists, and will not give in to the passage of time; they refuse to be pushed aside because of their age. Beyond the taboos, they reflect on their loves, past and present, because their love-lives and sex-lives are not yet over. - First release in Sweden

Post-screening panel ‘My Wonderful West Berlin’ openly discusses the need for cherishing a sense of LGTBQ+ history and of our struggles for equality. An increasingly polarised European landscape stresses the urgency to build an inclusive sense of queer history. How can different civil actors contribute to the establishment of a legitimate historical framework for LGTBQ+ history? How can we write our history and reactivate a sense of memory?

An audiovisual session featurinf a selection of independent shorts by emergent queer artists and collectives followed by a conversation. Woven together, the pieces will explore the intersections of LGTBQ+ issues with questions around feminism, media and cultural representations of the queer body, race, and identity.

With the collaboration of CinemAfrica

Moderator: Carlota Jerez is a cultural practitioner and researcher based in Stockholm.

This performance appropriates the tools of the DJ from a queer, feminist perspective to create a critical landscape of bodies in which questions around identity, sexism, racialization, exploitation, race, or class are at play. The piece combines Maher’s design work, which examines the ‘mediated bodies’ produced in Western digital platforms, with Mager’s work, which focuses on the invisibility of workers’ bodies and exploitative patterns in the production of digital devices, thus subverting and queering systems of image production, consumption, and representation.

This epistolary short film invites us into the unsettling life of a young Ghanaian man struggling to reconcile his love for his mother with his love for same-sex desire amid the increased tensions incited by same-sex politics in Ghana, questioning what it means to be queer in this time and space.

Juli struggles with exercises following a gender confirmation surgery. She seeks comfort and support from others online. Her desire for intimacy proves stronger than her fears and makes her dare to step out into the real world to meet a man. But the evening doesn’t end as she had hoped for.

Davide is different from other teenagers. Some aspects of his appearance make him look like a girl. Davide is fourteen when he runs away from home. His intuition, or perhaps fate, leads him to choose Villa Bellini, the largest park in Catania, as a refuge. The park is a world in and of itself, a world of the marginalized, to which the rest of the city turns a blind eye.

Eleutheria is an Ancient Greek Term for the personification of Liberty. We are a European Film &amp; Arts Festival for Stockholm Pride 2017.

With contributions from an array of European countries, this film programme is a European mapping of sexual, audiovisual and artistic dissidence.

EUNIC (European Union of National Institutes for Culture) is delighted to present ELEUTHERIA, an international queer public programme in the official context of Stockholm Pride 2017. With contributions from an array of European countries, Eleutheria uses the queer archive and the living voices of representative bodies as a tool for the dissemination of social, audiovisual, and artistic dissidence. 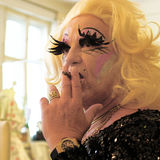