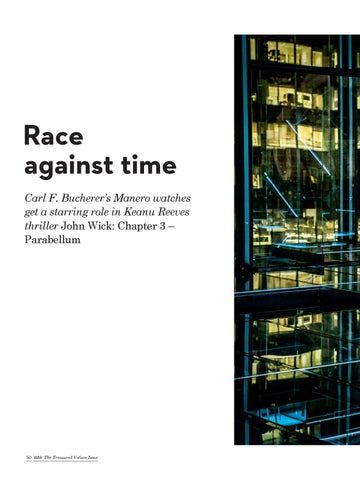 ime is not on John Wick’s side. The titular character in John Wick: Chapter 3 – Parabellum, played by Keanu Reeves, returns in the third instalment of this action-packed series as a man who has a $14 million bounty on his head and a pack of dangerous criminals on his trail. The film features bold-face names like Halle Berry, Anjelica Huston and Ian McShane. Another featured player is Carl F. Bucherer. The 1960s-inspired Manero AutoDate, which was seen in the first two instalments, is back on Wick’s wrist. Berry’s character, Sofia, also sports

a Carl F. Bucherer timepiece. Wick’s friend wears the more feminine but equally elegant Manero Peripheral. “The watches are absolutely perfect for the movies,” says actor, stuntman and Carl F. Bucherer brand ambassador Daniel Bernhardt, who has played a role in each John Wick. “I’m getting approached left and right because people want to wear the watches in their films.” John Wick’s sets make stylish surroundings for the timepieces. In a scene in a glass room, high-end glamour goes head to head with a sleekly choreographed fight. As Wick faces off with his opponents, Carl F. Bucherer brand movies and animations showcasing the Manero Flyback in rose gold are projected in the background. “I love the look, their craftsmanship and how precise they are,” Bernhardt says. “I keep catching myself looking at

the watch and saying, ‘It’s like a piece of art.’” John Wick director Chad Stahelski is also a longtime friend and brand ambassador. He uses the brand’s watches in his films for good reason. “In my line of work, wardrobe and accessories have to stand up to the physical challenges that actors and stunt people face on set filming intense action sequences,” Stahelski has said. “High-performance, yet stylish, luxurious and modern, Carl F. Bucherer watches are ready for anything – a natural fit for a film like John Wick.” Top, from left Daniel Bernhardt, Sascha Moeri, Keanu Reeves and Chad Stahelski model their Carl F. Bucherer timepieces at the film premiere 1888 The Treasured Values Issue 53 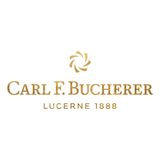