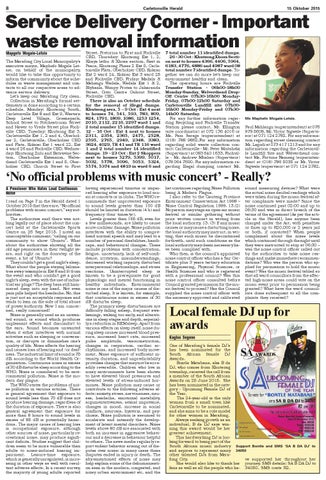 ‘No official problems with music concert’ - Really? A Pensioner  Who  Hates  Loud  Continuous  Noise I read on Page 7 in the Herald dated 1 October 2015 that there are, “No official problems with music concert,” say authorities. The authorities said there was nothing legally out of place about the concert held at the Carletonville Sports Centre on 26 Sept 2015. I noted an unacceptable comment, “calling on our community to show Ubuntu”. What about the authorities showing all the old age pensioners in their twilight years, and right on the doorstep of the event, a bit of Ubuntu? They couldn’t get a good night’s sleep. What about the people staying kilometres away (example in Ext 8 and 9) from the event and who couldn’t get a good night’s sleep, even with the use of industrial ear plugs? The deep bass still hammered deep into my head. Not even pain pills helped the headache. No, this is just not an acceptable response and tends to lean on the side of total abuse of power/authority. Now I am concerned, really concerned! Noise is generally used as an unwanted sound, or sound which produces unpleasant effects and discomfort to the ears. Sound becomes unwanted when it either interferes with normal activities such as sleeping or conversation, or disrupts or diminishes one’s quality of life. Noise affects the hearing and causes loss of hearing and / or deafness. The industrial limit of sound is 75 dB, according to the World Health Organisation. Continuous noise in excess of 30 dB disturbs sleep according to the WHO. Noise is considered to be environmental pollution. Noise is the modern day plague. The WHO states the problems of noise pollution in various articles. There is general agreement that exposure to sound levels less than 70 dB does not produce hearing damage, regardless of the duration of exposure. There is also general agreement that exposure for more than 8 hours to sound levels in excess of 85 dB is potentially hazardous. The major cause of hearing loss is occupational exposure, although other sources of noise, particularly recreational noise, may produce significant deficits. Studies suggest that children seem to be more vulnerable than adults to noise-induced hearing impairment. Leisure-time exposure, which is generally unregulated, is increasing in other ways as well with resultant adverse effects. In a recent survey, the majority of young adults reported

having experienced tinnitus or impaired hearing after exposure to loud music at concerts or in clubs. The WHO recommends that unprotected exposure to sound levels greater than 100 dB should be limited in duration (4 h) and frequency (four times/yr). Levels greater than 165 dB, even for a few milliseconds, are likely to cause acute cochlear damage. Noise pollution interferes with the ability to comprehend normal speech and may lead to a number of personal disabilities, handicaps, and behavioural changes. These include problems with concentration, fatigue, uncertainty, lack of self-confidence, irritation, misunderstandings, decreased working capacity, disturbed interpersonal relationships, and stress reactions. Uninterrupted sleep is known to be a prerequisite for good physiologic and mental functioning in healthy individuals. Environmental noise is one of the major causes of disturbed sleep. It is known, for example, that continuous noise in excess of 30 dB disturbs sleep. The primary sleep disturbances are difficulty falling asleep, frequent awakenings, waking too early, and alterations in sleep stages and depth, especially a reduction in REM sleep. Apart from various effects on sleep itself, noise during sleep causes increased blood pressure, increased heart rate, increased pulse amplitude, vasoconstriction, changes in respiration, cardiac arrhythmias, and increased body movement. Noise exposure of sufficient intensity, duration, and unpredictability provokes changes that may not be so readily reversible. Children who live in noisy environments have been shown to have elevated blood pressures and elevated levels of stress-induced hormones. Noise pollution may cause or contribute to the following adverse effects: anxiety, stress, nervousness, nausea, headache, emotional instability, argumentativeness, sexual impotence, changes in mood, increase in social conflicts, neurosis, hysteria, and psychosis. Noise pollution is assumed to accelerate and intensify the development of latent mental disorders. Noise levels above 80 dB are associated with both an increase in aggressive behaviour and a decrease in behaviour helpful to others. The news media regularly report violent behavior arising out of disputes over noise; in many cases these disputes ended in injury or death. The aforementioned effects of noise may help explain some of the dehumanisation seen in the modern, congested, and noisy urban environment etc. and the

list continues regarding Noise Pollution being A Modern Plague. I also refer to the Gauteng Province Environment Conservation Act 1998 – Noise Control Regulation 1999. 13.(2) No person may stage an open-air music festival or similar gathering without prior written concert in writing from the local authority. 13. (3) If any music causes or may cause a disturbing noise, the local authority may instruct, in writing, that such music be discontinued forthwith, until such conditions as the local authority may deem necessary have been complied with. Who then, is the council’s appointed noise control officer who has a Snr Certificate plus 3 years tertiary education in Engineering, Physical Sciences, or Health Sciences and who is registered with a professional council? Was this noise control officer consulted before Council granted permission for the music festival to proceed? Has the Council supplied the noise control officer with the necessary approved and calibrated

sound measuring devices? What were the actual noise decibel readings which were taken during the music festival after complaints were made? Since the noise continued past 02:00 and up to 06:30 and was in direct breach of the terms of the agreement [As per the article in the Herald], has anyone been charged under the Act, with penalties or fines up to R20,000 or 2 years jail or both, if convicted? When people complained about the noise levels which continued through the night until they were instructed to stop at 06:30 – was the noise control officer called out by the authorities to take noise readings and make immediate recommendations? Who was the person who applied for permission to hold the music event? Was the music festival tabled so that all ward councillors from the affected high-noise areas could vote on the music event prior to permission being granted? What have the ward councillors done subsequent to all the complaints they received?

Local female DJ up for awards Kagiso Segone One of Merafong’s female DJ’s has been nominated for the South African female DJ Awards. Bontle Matabane, aka B da DJ, who comes from Khutsong township, received the call from a member of the South African Awards on 25 June 2015. She has been nominated in the category - Upcoming Female DJ of the Year. The 24-year-old is the only woman from a small town like Carletonville to be nominated, and she aims to be a role model for other women in Merafong. Always seeking growth as an individual, B da DJ says winning this award would be her greatest achievement. This hardworking DJ is looking forward to being part of the South African music industry Support  Bontle  and  SMS  ‘SA  B  DA  DJ’  to and aspires to represent many 34050 other talented DJs from Merafong City. ve supported her throughout her She would also like to thank her journey. SMS details: SA B DA DJ to fans as well as all the people who ha- 34050, SMS costs R2. 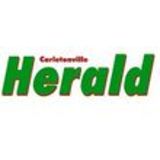