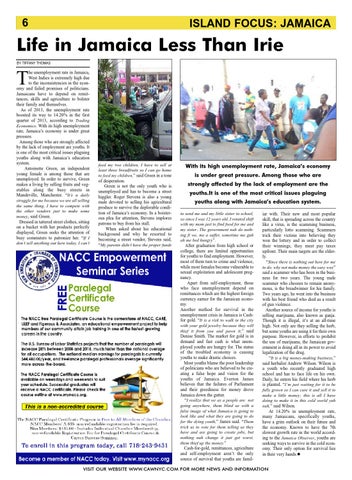 Life in Jamaica Less Than Irie

he unemployment rate in Jamaica, West Indies is extremely high due to the inconsistencies in the economy and failed promises of politicians. Jamaicans have to depend on remittances, skills and agriculture to bolster their family and themselves. As of 2013, the unemployment rate boosted its way to 14.20% in the first quarter of 2013, according to Trading Economics. With its high unemployment rate, Jamaica’s economy is under great pressure. Among those who are strongly affected by the lack of employment are youths. It is one of the most critical issues plaguing youths along with Jamaica’s education system. Antoinette Green, an independent young female is among those that are unemployed. In order to survive, Green makes a living by selling fruits and vegetables along the busy streets in Mandeville, Manchester. “It’s a daily struggle for me because we are all selling the same thing. I have to compete with the other vendors just to make some money, said Green. Dressed in tattered street clothes, sitting on a bucket with her products perfectly displayed, Green seeks the attention of busy commuters to patronize her. “If I don’t sell anything out here today, I can’t

feed my two children, I have to sell at least three breadfruits so I can go home to feed my children,” said Green in a tone of desperation. Green is not the only youth who is unemployed and has to become a street higgler. Roger Stevens is also a young male devoted to selling his agricultural produce to survive the deplorable condition of Jamaica’s economy. In a boisterous plea for attention, Stevens implores patrons to buy from his stall. When asked about his educational background and why he resorted to becoming a street vendor, Stevens said, “My parents didn’t have the proper funds

With its high unemployment rate, Jamaica’s economy is under great pressure. Among those who are

strongly affected by the lack of employment are the youths.It is one of the most critical issues plaguing youths along with Jamaica’s education system.

to send me and my little sister to school, so since I was 12 years old, I rotated shift with my mom just to find food for me and my sister. The government nah do nothing fi we, me a suffer, sometime me guh ah me bed hungry”. After graduation from high school or college, there are limited opportunities for youths to find employment. However, most of them turn to crime and violence, while most females become vulnerable to sexual exploitation and adolescent pregnancy. Apart from self-employment, those who face unemployment depend on remittances which are the highest foreign currency earner for the Jamaican economy. Another method for survival in the unemployment crisis in Jamaica is Cashfor gold. “It is a risk to walk in the city with your gold jewelry because they will thief it from you and pawn it,” said Denise Smith. The market for gold is in demand and fast cash is what unemployed youths are hungry for. The status of the troubled economy is causing youths to make drastic choices. Most youths blame the poor leadership of politicians who are believed to be creating a false hope and vision for the youths of Jamaica. Everton James believes that the failures of Parliament and their greediness for money drove Jamaica down the gutter. “I realize that we as a people are not going anywhere, them blind us with a false image of what Jamaica is going to look like and what they are going to do for the dying youth,” James said. “Them trick us to vote for them telling us they have and are going to create jobs, but nothing nuh change it just get worst, them thief up the money.” Cash-for-gold, remittances, agriculture and self-employment aren’t the only source of survival that youths are famil-

iar with. Their new and most popular skill, that is spreading across the country like a virus, is the scamming business, particularly lotto scamming. Scammers trick their victims into believing they won the lottery and in order to collect their winnings, they must pay taxes upfront. Their main targets are the elderly. “Since there is nothing out here for me to do, why not make money the easy way” said a scammer who has been in the business for two years. The young male scammer who chooses to remain anonymous, is the breadwinner for his family. Two years ago, he went into the business with his best friend who died as a result of gun violence. Another source of income for youths is selling marijuana, also known as ganja. Though it is illegal, it’s at an all-time high. Not only are they selling the herb, but some youths are using it for their own purpose. However, in efforts to prohibit the use of marijuana, the Jamaican government is doing all in its power to avoid legalization of the drug. “It is a big money-making business,” said herbalist Andrew Wilson. Wilson is a youth who recently graduated high school and has to face life on his own. Daily, he enters his field where his herb is planted. “I’m just waiting for it to be fully grown so I can cure it and sell it to make a little money; this is all I have doing to make it in this cold world yuh nuh,” said Wilson. At 14.20% in unemployment rate, many Jamaicans, specifically youths, have a grim outlook on their future and the economy. Known to have the 7th slowest growth rate in the world according to the Jamaica Observer, youths are seeking ways to survive in the cold economy. Their only option for survival lies in their very hands.l

VISIT OUR WEBSITE WWW.CAWNYC.COM FOR MORE NEWS AND INFORMATION 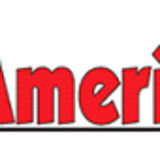