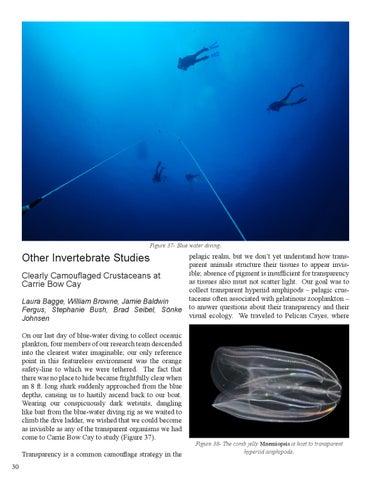 pelagic realm, but we don’t yet understand how transparent animals structure their tissues to appear invisible; absence of pigment is insufficient for transparency Clearly Camouflaged Crustaceans at as tissues also must not scatter light. Our goal was to Carrie Bow Cay collect transparent hyperiid amphipods – pelagic crustaceans often associated with gelatinous zooplankton – Laura Bagge, William Browne, Jamie Baldwin Fergus, Stephanie Bush, Brad Seibel, Sönke to answer questions about their transparency and their visual ecology. We traveled to Pelican Cayes, where Johnsen On our last day of blue-water diving to collect oceanic plankton, four members of our research team descended into the clearest water imaginable; our only reference point in this featureless environment was the orange safety-line to which we were tethered. The fact that there was no place to hide became frightfully clear when an 8 ft. long shark suddenly approached from the blue depths, causing us to hastily ascend back to our boat. Wearing our conspicuously dark wetsuits, dangling like bait from the blue-water diving rig as we waited to climb the dive ladder, we wished that we could become as invisible as any of the transparent organisms we had come to Carrie Bow Cay to study (Figure 37). Transparency is a common camouflage strategy in the 30 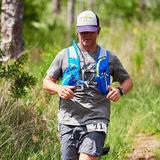 A report on research activities that took place at Carrie Bow Cay Field Station, Belize during 2013.

A report on research activities that took place at Carrie Bow Cay Field Station, Belize during 2013.