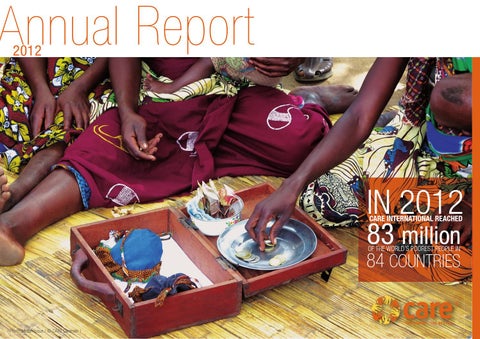 83 million of the world’s poorest people IN

through In 2012 CARE International reached

THE SOONER THE BETTER

CARE International is one of the largest humanitarian organisations in the world. In 2012 the work of CARE International strengthened the capacity of 83 million people in 84 countries. CARE Danmark runs long-term programmes in eight of these countries. CARE Danmarkâ&#x20AC;&#x2122;s work is focused on prevention and helping people help themselves. According to calculations, one dollar invested in preventing climate disasters is seven dollars saved in emergency relief. This is why CARE acts before disasters strike to create long lasting solutions together with poor and vulnerable people. This is what we call timely care.

BOARD OF DIRECTORS’ REPORT 2012 In 2012 CARE Danmark’s programme country Niger really hit the global spotlight when Islamist groups occupied the northern parts of its neighbouring country Mali. The rebel groups sought to impose radical Islamic measures such as Sharia against the will of the local population. Consequently, thousands of refugees ﬂed across the border to Niger, which resounded all the way to Europe and Denmark, who formulated a brand new Sahel initiative. The on-going debate about conﬂict in the starved Sahel region often centres around religious perspectives. But the root causes of the conﬂict are to be found in the absence of human rights and investments in the area, which has put an already vulnerable population under pressure and resulted in HIS ROYAL HIGHNESS PRINCE JOACHIM PATRON OF CARE DANMARK

recurring rebellions that also kicked off the current crisis. The new Islamist police and intelligence service in Mali was recruited locally and mainly among young people who saw an opportunity for a paid job that would ensure their survival. So the occupation was fuelled rather by economic motivations than religious beliefs.

Combating radicalization is therefore not the way forward. Solutions are rather to be found in investing in the region and in empowering the local population and realising their rights to education, health care and basic services. The ﬁght for human rights for the local population is central to CARE Danmark’s work in Niger.

The fact that the increasing variability in the climate leads to a growing number of disasters – especially in the world’s poorest countries – didn’t resound accordingly at the 18th UN Climate Conference in Doha. COP18 was marked by a blatant lack of ambition and political will to ﬁnd solutions that can save the planet from the devastating effects of climate change. The disappointing lack of results, especially for the world’s poorest people who are affected the worst, is an obvious sign of the climate fatigue that has fallen upon the richest part of the world.

In the midst of the political conﬂict Niger was once again hit by a harsh drought, which threw the population into the third hunger

In contrast, great ambitions prompted the CARE International Board to adopt a resolution which is to set the stage for a new future CARE called

CARE Global. The process will lead CARE away from being nationally anchored in a small number of countries to become a global network. By tapping into the organisation’s diversity, resources and experience, CARE will promote innovative solutions and be at the forefront of global responsibility. CARE Danmark wants to take an active and constructive part in this transformation. At the back set of these developments in CARE International and our cooperation with Danida, CARE Danmark developed a new long-term strategic plan - Vision 2020. The plan was developed through a process in which both the daily management, the staff and the board of CARE Danmark participated. CARE’s cooperation with Danida has focused on performance reporting, but the beginning has been difﬁcult. Danida’s guidelines on result-based reporting of the civil society strategy were unclear. CARE ANETTE FØLSGAARD

Danmark has now launched a number of initiatives to solve the problem in a way that takes CARE’s own priorities into account. CARE Danmark’s strategic partnership with Coop on vegetable production in Kenya spread out in 2012. In autumn eight new storytellers visited the project, and in the spring of 2013 they are touring Coop’s annual meetings around the country to talk about the joint project, CARE’s work and Coops Trade with Africa initiative. Our partnership with Coop branched out even further when CARE Danmark together with the children’s organisation Børns Vilkår won the right to manage the charity button on the bottle recycling machines in all of Coop’s supermarkets for the next two years. A number of activities related to the button has been planned, which will involve store customers. It is just one out of many initiatives SUSANNE LARSEN

that CARE Danmark looks forward to expanding in the future. In summer it was time to say goodbye to the ofﬁces at Nørrebrogade, where CARE’s secretariat has been located for a number of years. The secretariat moved to new surroundings at Jemtelandsgade on Amager. The new house is shared with the Danish Institute for Parties and Democracy and the Nordic Consulting Group. In 2003, CARE Danmark took a decision to increase the number of fundraising campaigns signiﬁcantly. The investment has gradually borne fruit, and income from private donors has increased signiﬁcantly since then. This has resulted in our healthy ﬁnancial situation. This positive trend means that CARE Danmark will still be working with private fundraising in the coming years. ULLA RÖTTGER CEO

FINANCIAL REVIEW 2012 In 2012, CARE Danmark had a total income of 118 million kroner. Of this, 48 million kroner came from the framework agreement with Danida. CARE Danmark also received support from the EU and the Governments of Austria, UK and Finland. Added to this were contributions from individuals, corporations and foundations. FUNDRAISING ACTIVITIES In 2012 the income from individuals, corporations and foundations went slightly below 2011 level. Private donations amounted to 25.4 million and accounted for 21 percent of the total revenue. The majority of this year’s private fundraising came from regular contributors and support members and amounted to 18 million - of which 3.7 million kroner came from memberships. The number of support members increased by 21 percent from 12,837 in 2011 to 15,472 in 2012. The number of donors also increased by 21 percent from 20,755 in 2011 to 25,092 in 2012.

Danmark’s share of the funds amounts to 3.8 million kroner. They are earmarked towards helping children in northern Uganda. It is noted with satisfaction that CARE Danmark once again has succeeded in keeping an overall high level of fundraising. The growing support from private individuals is central to CARE Danmark’s work and future. ANNUAL RESULT AND EXPECTATIONS FOR 2013 The ﬁnal accounts for 2012 show a proﬁt of 447,000 kroner and at 31 December 2012, the reserves amounted to a total of 10.4 million kroner. CARE Danmark therefore continues the recent years of economic growth. The ﬁnancial results were satisfactory compared to CARE Danmark’s long term goal of building its reserves. The administration rate has gone down from 15 percent in 2011 to 12 percent in 2012. This is due to a decrease in the administrative expenses of the secretariat. Meanwhile, the total income from public institutions has been increasing in 2012. It is expected that revenues from public institutions in 2013 will be at the same level as in 2012, and that the administration rate is maintained at 12 percent.

Cooperation with companies is an important part of CARE Danmark’s fundraising strategy. In 2011, CARE Danmark entered into a strategic partnership with Coop, and in 2012 managed to win the right to run the charity button on bottle recycling machines in Coop’s supermarkets. The result of this collaboration will appear in the accounts in 2013 CARE Danmark expects a proﬁt of a total of two million kroner in and 2014. Overall in 2012, CARE Danmark received four million 2013 to further consolidate the reserves. The framework grant from kroner from businesses and foundations, which is less than in 2011. Danida is at 48 million kroner, and opportunities for additional individual project funding from Danida are anticipated. At the same In 2012 CARE Danmark also took part in the yearly national telethon time the well-established cooperation with the EU and other foreign Danmarks Indsamling, where 88 million kroner were collected. CARE institutional donors is expected to continue in 2013.

(including Tanzania and Kenya)

Result of the year

CARE INTERNATIONAL CARE is a non-political and non-religious organisation consisting of 12 autonomous organisations in the following countries: Australia, Canada, Denmark, France, the Netherlands, Japan, Norway, Great Britain, Thailand, Germany, USA and Austria. These organisations work autonomously each with their unique core competences within the ﬁelds of emergency and development assistance. At country ofﬁce level however, all 12 organisations coordinate their respective activities closely. Internationally, CARE is one of the world’s largest humanitarian organisations with programmes in 84 countries reaching more than 83 million people in 2012. The core principle of all CARE programming is that the world’s poorest and most vulnerable people must be empowered so that they become capable of improving the livelihoods of themselves and their families.

CARE DANMARK CARE Danmark does not provide emergency assistance. Instead, we focus on long-term development assistance based upon our core principle of helping people to help themselves. CARE Danmark works in eight countries in Asia and Africa in close cooperation with local communities. Local staff makes up 97 per cent of all CARE country ofﬁce staff, ensuring sustainability of activities as well as effective locally-anchored operations. In addition, CARE Danmark partners with local civil society organisations in our countries of collaboration. Through this strategy we enable grass root organisations to strengthen their level of inﬂuence and voice in dealing with governments on issues concerning the right to food, water, land, health care, participation in decision-making processes, as well as gender equality. Read more about CARE Danmark’s work at www.care.dk/english

CARE Danmark was established in 1987 as an independent foundation. Consequently, CARE Danmark is governed by a Foundation Board that is elected by the Board of CARE Danmark Representatives.

VIETNAM In addition, the organisation consists of a Support KENYA TANZANIA MOZAMBIQUE

CARE Danmark Board of Representatives Chair

the CAre danmark Award is presented annually to an individual or an organisation for outstanding achievements in support of the CAre danmark cause. In 2012 the award went to hans-georg Møller – known as ’gorm’. As CAre danmark ambassador and storyteller, gorm has since 2003 given a long row of presentations and talks about CAre’s work to thousands of danes. he has inaugurated exhibitions and acted as auctioneer, and he has travelled to several of CAre’s programme countries acting as a reporter to the danish media. gorm has put an extensive amount of hours and great energy into his voluntary work for CAre, which is why he received the 2012 CAre danmark Award. 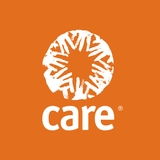