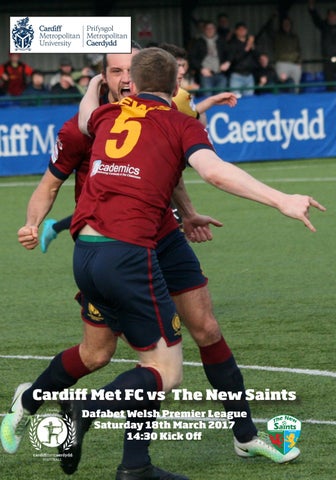 We take a look at the history of The New Saints.

Analyst Brad Cooper gives a look behind the scenes

Match photos from our recent games against Carmarthen.

Chairman’s Welcome Written on behalf of the Chairman by DoF, Christian Edwards. The work of E.E. Cummings can be portrayed as some of the great poetry of the modern era. Although, written in a non-conformist style his writings rendered a sense of panache and innovation that perhaps served as a structural metaphor for how modern society has killed individual creativity and freedom. Much of his work served to highlight the ‘less is more’ approach where simple, key words, had a dramatic effect on the reader. What Cummings attempted within his offerings was to encourage the reader[s] to read between the lines and unveil the hidden message. In doing so, he wanted them to follow the meandering paths of his words so that their minds did not become too narrow. In other words, we can argue that Cummings asks the reader to move beyond the obvious and make sense of the message[s] he portrays by stepping outside of their comfort zone. Such thought, asks us to continue our learning and seek to know what lies in the unknown, to question curiosity and inquisitiveness that may unlock the door. The door to what, you may ask? Well, curiosity is innate in us all; it is surface learning, it forges the want to know more about the unknown. Inquisitiveness however, requires us to do more, it is deeper learning. We must ask more questions in order to process new information, information that may lead us to new pastures of uncertainty. The same can be said about sport. If you carry on with the same information, the diluted message[s], then you run the risk of staying put. By staying put you risk nothing, the boundaries are safe and you don’t progress. To improve and evolve you must aspire to give everything, think outside the box to be the best you can be. To do this, does not require ranting or raging (trust me I have tried), it takes patience, time and words. But like Edward Estlin Cummings, words of meaning, where the virtue of what is said allows the individual to think and consider where they are heading by staying present in the moment. This, I believe is true in football. If, what I say about the quality of our words is right, then the actions that support what we say are harder than we know. Yet, it’s the exploring and realisation of these actions that allow us to ask more questions to develop new knowledge, to be inquisitive to succeed. Therefore, adhering to such principles that would allow winning to look after itself. Dymuniadau gorau Swanny

Today’s Opponents The New Saints Founded in 1860, Oswestry Town FC were also founder members of the Football Association of Wales in 1876 – a rare achievement for an English club. In their long history, they’ve competed in the Northern Premier League, Cheshire League and Cymru Alliance. Despite several successes including reaching the FA Cup first round and winning the Cheshire League, the club went into financial decline.In the late 1980s, Oswestry Town were forced to sell their Victoria Road ground to pay mounting debts and the club folded completely. The re-formed club opted for Welsh football and played in the Cymru Alliance/ Welsh Premier from 1995/6 to 2003. From the small Welsh village of Llansantffraid, and nicknamed the ‘Saints’, the unassuming team began life playing in the Montgomeryshire Amateur League in 1959. Here it achieved considerable success, winning numerous honours. In addition, Llansantffraid were Village Cup winners seven times, up to the nineties. In 1989/90 the club was saved from the brink of closure, with action that saw them climb through the Welsh pyramid system into the Mid-Wales League. In 1990/91 Llansantffraid were promoted to the Cymru Alliance and the 1992/93 season saw Llansantffraid finish top to take their place in the League of Wales.

new name captured the spirit of both clubs – including Saint Oswald and Saint Ffraid. The club’s new crest featured the Welsh dragon and English lion present in the clubs’ previous badges. TNS played their first game at Park Hall Stadium in 2007, redeveloped at a cost of more than £3 million. The facilities benefit the whole of the community in its wider context creating a family entertainment facility in the heart of Oswestry.

The 1997/98 season saw Llansanffraid change their name to Total Network Solutions (TNS), following a lucrative sponsorship deal. In 1999/00 the club finally reached the pinnacle of Welsh Football when TNS beat Barry Town to the league title and qualified for the European Cup. European qualification became an annual event, including glamour ties with Manchester City (02/03) and Liverpool (04/05). In 2003, Oswestry Town merged with Total Network Solutions, with the aim of playing at a new stadium in Oswestry from 2005/06. Following the sale of Total Network Solutions to BT in 2006, the club changed its name to The New Saints FC. The

The Big Interview In this week’s Big Interview, we take a look behind the scenes, where our Performance Analyst Brad Cooper gives us an insight into his role at the club and his responsibilities throughout the week! MET: Hi Brad, thanks for taking time to talk to us today, can you firstly give us a brief overview of what exactly the CPA staff do for the club? BC: First and foremost our role is to ensure players and coaches are provided with relevant video footage of training and matches so they are able to reflect and develop on previous performances. Outside of this, we have been seen to feed-forward on up-coming matches, providing opposition analysis, informing players prior to the match. MET: So how does this process work? BC: Each game (home and away) is recorded by one of the analysts where footage is saved and consequently analysed. Using “code-windows” the analysts are able to clip relevant events dependant on their characteristic, for example, defending set pieces, shots on target etc. Once analysed the footage for each game, along with coded clips, is then uploaded to a server where players and coaches are able to log on and review performance from the previous game. MET: So is it just the team analysis you do? BC: No, in addition to the team code-window, we have an individual window, which creates clips for each time a player is involved. This also provides information the type of action and the consequential outcome, for example, aerial challenge, won, or shot, off target. Not only does this mean players can see how they contributed to the game, but coaches are able to review individual performance. MET: That’s great, thanks for the insight Brad. Keep up the good work!

Opposition Analysis Adrian Cieslewicz (21) Adrian Cieslewicz was born in Gorzów Wielkopolski on the 16th of November, 1990. Having spent time at Manchester City and Wrexham, the Pole joined the Welsh Premier League Champions, in the summer of 2014. Better known as ‘Ciss’, he is known for his electric pace. The winger will wear the number 21 shirt for The Saints.

Craig Harrison (Manager) A former Premier League defender, Craig Harrison was appointed director of football at The New Saints in 2011. Gateshead born Harrison spent four years at Airbus UK Broughton where he was appointed manager at the beginning of July 2008. Harrison, has so far guided TNS to ve WPL titles and three FAW Welsh Cups, as well as two sepa- rate triumphs in theWord Cup. @cardiffmetfc

The first team have managed to reach the National Finals of BUCS where they will face northumbria at the BUCS Big Wednesday at Bath. Honourable mentions for the 3's who won 7-0 to avoid relagation and the 4's whon clinched the title with a 4-1 win. The 5's also avoided relegation on the final day.

Reserves Team The reserves won their only game since our last WPL home game against Carmarthen with a 4-1 win at home to Britton Ferry reserves. The reserves play today and can be crowned champions for the third successive season and stay on track to achieve their goal of an 'Invincibles' season. Keep an eye on our Twitter to see if they can do it!

Youth Team Cardiff Met Development side have moved to 4th in the Welsh Premier League South following consecutive victories over Risca United and Merythr town. A hard fought draw last Sunday against Penybont, which saw 10 goals scored, means CMU youth will be keen to tighten up their defences come Sunday. With three games in-hand, CMU will travel to Aberystwyth this Sunday in a tricky fixture at The Seasiders.