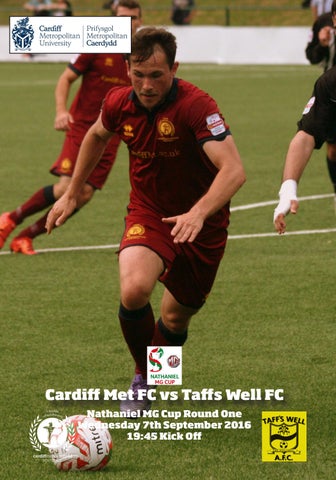 We take a look at the history of Taffs Well FC.

Kyle McCarthy talks to the programme about the magic of the cup.

A selection of match photos from our games against Cefn Druids and TNS.

A round up of all thngs Cardiff Met

Chairman’s Welcome Firstly, I’d like to extend a very warm welcome to the players, officials and supporters of Taffs Well to Cyncoed Campus. Croeso cynnes. In a recent obligatory post match interview for Sgorio, our Director of Football, Christian Nic Edwards, was asked if we were worried about not having so far won, and only scoring one goal. Not withstanding the open interpretation of statistics (in 5 games we have only conceded 2 goal from open play), Christian as always had a decent answer. Worried about not winning one of our first five games? Yes and no. Yes in relation to not picking up required points, but no in terms of creating a plethora of chances and (largely) defending well. In some ways, the question echoed those we continuously faced as we closed in on promotion last year. Then, we were openly bombarded with questions (and pronouncements) about the need to ‘import’ players to stay in the WPL; that we had to spend money to survive. The esteemed Dr Edwards and myself took 1.5 seconds precisely to come with a joint answer. Nah. The answer came not from some false arrogant consciousness or blind faith, but more from an authentic consideration of club and playing identity. No doubt we have failings, but our philosophy is more important than any short term ‘pragmatism’. This is not to say that we are naive in terms of winning of course being the ‘end game’; both of us, as well as others in the club, have been around too long for that. Rather, we value flexibility within principles; being methodical whilst not mechanical. However, being methodical in this respect is not as end in itself, it’s methodical in relation to our beliefs about the value of possession and good defending. Hence, we genuinely believe in the players we are working with; players who play because they want to and not for money or any other extrinsic reward. Nothing breaks a ‘team’ like money. Having been a coach and Chairman over many more years than I care to remember, I know that only too well!!!! It can be rightly said that this season will test the philosophy espoused; there are plenty of sceptics who will scoff at the intention and this declaration. But we certainly believe the players we have can improve; and it’s our job as coaches to ensure they do. In this case, we are in an exchange with the players. We believe in their ability to play well and improve, whilst they trust our advice in terms what they need to do to improve. That is the bargain struck; the one which must be honoured. A good luck to all. Professor Robyn Jones

Todayâ&#x20AC;&#x2122;s Opponents Taffs Well FC The club was formed at a meeting of interested people at St Mary's Church Hall, Glan y Llyn in the summer of 1946. Foremost at the meeting were Bill Newman, Elan Gough and John Morley, all three are sadly no longer with us. Two teams were formed and entered into the Cardiff and District League. The Gwaelod y Garth cricket ground "The Ynys", along side the river provided the clubs first home. This ground was not ideal and in their second year they opened negotiations with Dai Parry, a local Rhiw Dda'r farmer, who provided them with a field. The dressing rooms were in St Mary's church hall, Glan y Llyn. During the inaugural year a successful application was made to join the newly formed South Wales Amateur League, a league to which we have proudly been a member for over 60 years. The club soon achieved success and between 1949 and 1956 were runners-up four times and champions twice. They won the old Corinthian Cup in 1954 and were finalists in 1951 and 1953. In 1947 the club an application to join the Welsh League failed. In those days the pyramid system did not exist. In 1956 Bill Newman the driving force behind the club died which led to a decline in fortunes of the club At rock bottom in 1960 Don James joined the club as secretary. Due to his determination it took only two years to turn the club around and with the help of many people, too numerous to mention regained it's standing in the Amateur League. Success followed and the club won the championship in 1975.1976 and 1977 having been runners up in 1972, 1973 and 1974, they also won the South Wales Intermediate cup in 1975 and 1977. The club entered the Welsh League in 1977. The hard working Malcolm Frazer joined the club in 1977 becoming the Amateur League secretary and his sister Norma Samuel became the Welsh League Secretary in 1996.

The Big Interview After an unforgiving start to life in the Dafabet Welsh Premier League, a Nathaniel MG Cup game is a welcome distraction for the archers. We caught up with defender Kyle McCarthy ahead of tonights clash with Taffs Well.

MET: Hi Kyle, thanks for taking the time to answer our questions. Firstly, how have you found the step up to the Dafabet Welsh Premier League? KM: It's been enjoyable despite the slow start in terms of points. We've come up against some tough opposition and its been a step up but we're learning a lot as we go.

MET: We're in Nathaniel MG Cup action against Taffs Well tonight, whats it like as a player to have to switch focus from the league to the cup? KM: It can be tricky and challenging against opposition who want to prove a point and make a statement against a team from the Welsh Prem and we know this as it was us in the past playing the underdog. We'll definitely be very focussed tonight, we're all really keen to progress and do well in this cup. MET: What can we expect from the team over the next few games? KM: More of the same to be honest, we'll be looking to build on the many positives we've had from the performances so far, whilst being a bit more consistant and picking up some points. MET: Thanks Kyle, good luck

Opposition Analysis Tom Burridge (Midfielder) Young midfielder signed from Cardiff City after a 1 year professional contract with The Bluebirds. Burridge is well known for his tackling ability and many rate him as having the best range of pass in the Welsh League.

Phil Draper (Goalkeeper) Another new signing this season, Draper joins after succesfel spells in North Wales with Caersws and Aberyswyth including two appearances in the Europa League. Draper has also played for Wales Univeristies whilst a student at Bangor University.

The Final Word Cardiff Met FC is so much more than just a first team with a reserves and youth team, plus 5 sides competing in BUCS (British Universities & Colleges Sport) leagues. We also have a fully FAW accredited academy. BUCS Roundup The BUCS season runs during academic term time and Cardiff Met currently has 5 teams competing from The Premier Divison through to Western 5B. Along with Cardiff Met LFC, we are the highest ranked institution for football in the UK. Reserves Team Our reserve side compete in the Welsh League Reserve League West after moving from the East Division at the end of last season. The reserves were due to start their season last weekend but their game against Briton Ferry couldnt beat the rain and was unfortunately postponed. Youth Team The youth team have started strongly in the Welsh Premier Development League South, sitting second after 2 games. A 3-2 win against Carmarthen and 2-2 draw with Cambrian & Clydach has set the team up for another title push this season. Social Media Social media is the easiest way to keep up to date with all the goings on at Cardiff Met FC. We have a Facebook page and Twitter (@CardiffMetFC), where you can find post match interviews and info on upcoming games and we also have a brand new website which can be found at www.cardiffmetfc.com. @cardiffmetfc