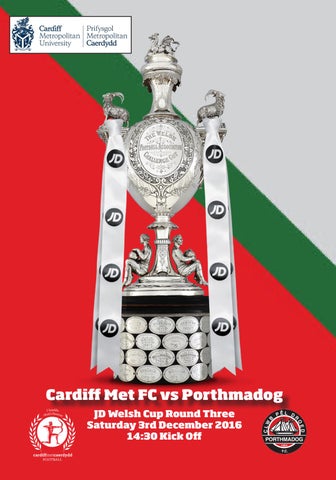 We take a look at the history of Porthmadog.

Goalkeeper Will Fuller talks to the matchday programme about the magic of the cup.

Match photos from our game against Llandudno.

Chairman’s Welcome Firstly, let me extend a warm welcome to the players, officials and supporters of Porthmadog Town FC to the Christiano Bernabéu Stadium for this afternoon's encounter; our first match in the Welsh Cup this year. Croeso cynnes i chi gyd. Mistakes are most often unwelcome in our (or any) business; about as welcome as flatulence in a crowded lift. In response, players are heard to howl (or worse) in frustration when mistakes are made, while coaches constantly try to eradicate the menace through ever greater growling recourse to hard work ‘till we bloody well get it right’. Needless to say, it’s not quite how we see it at Cardiff Met FC. This is because failure has an inherent intelligence about it. It’s through failure that we learn. If players succeed at everything asked of them in a session, then they obviously haven’t been stretched to the limits of their capability; they haven’t learnt anything new. Now this is not a recourse to overwhelming failure, or to repeated failure of the same task; a sure sign that no learning has occurred. Neither is it a case for the inherent desirability of failure; that would make little sense where performance related mistakes (especially for defenders) really matter. Rather, and maybe paradoxically, the belief goes that any success at an activity holds the seeds of its own demise; that is, complacency, a restricted search for new information, and a belief in ‘sticking’ to an old (once successful) formula, no matter what. The point made here is that failure is a more effective means of pursuing learning, progression and advancement; something we value very highly at the Club. The sign on my office door reads ‘No matter, try again, fail again, fail better’. If players don’t fail, they don’t improve. They must live at the edge of their capabilities where a degree of mistake-making is not avoided but invited. Things have to stretched to their natural breaking point, and sometimes further, on a regular basis. It’s the way of the explorer. As the recently departed Leonard Cohen reminded us, we shouldn’t fear the failure or the fracture. In his indomitable words; ‘There is a crack in everything that’s how the light gets in’. A good luck to all. Hwyl fawr. RJ

Todayâ&#x20AC;&#x2122;s Opponents CPD Porthmadog FC Porthmadog Football Club, one of the oldest in Wales, was founded in 1884. They were North Wales League champions in 1902/03 and reached the final of the Welsh Amateur Cup in 1905 -06 but had to wait until 1937-38 before they gained another championship. The '50s, '60s and '70s were highly successful decades for Port. The Welsh Amateur Cup was won in 1955/56 and 1956/57. The arrival of Mel Charles heralded more success. Port were league champions in three successive seasons between 1966 and 1969. Also in 1966, they played against Swansea in the Welsh Cup at the Vetch, before a crowd of 10,941. In the seventies, they were twice champions and topped the Welsh Alliance in1989/90. This secured Port a place in the newly formed Cymru Alliance (1990). In 1992, Port became inaugural members of the League of Wales. In the 1997/98 season, Port's time in the League of Wales came to an end following a poor run of form towards the end of the season. Knowing what has happened since in this league, it is a cause for amazement that Porthmadog lost their WPL status despite ending the season in 4th place from the bottom. Back in the Cymru Alliance, things went down hill after a good start. But some pride was restored as they won the League Cup but could only manage 5th spot in 1999-2000. Viv, together with assistant-manager Osian Roberts, re-built the team and 2002-03 proved to be one of the most successful in the history of the club. Every home game was won and the only two away defeats came after Port had already gained promotion. They returned to the WPL with a 19 points advantage over their nearest rivals. Port also lifted the League Cup and North Wales Coast Challenge Cup. Though the club once more narrowly retained its WPL place in 2008/09 league reorganisation meant that six clubs were relegated in 2009/10 and this time there was no hiding place for Port as they were demoted to the Cymru Alliance where they have competed since.

The Big Interview Ahead of today's JD Welsh Cup 3rd round clash with Porthmadog, we caught up with goalkeeper Will Fuller to talk about the magic of the cup and how the season has been going so far. MET: Hi Will, thanks for taking the time to answer our questions today. Firstly, we're in cup action today, what does that mean to the club and players? WF: The cup is always a bit of an unknown quantity, you never know who you may draw and in the past when we were in Welsh League 3 or League 2 it was an opportunity for us to play against teams from the divisions above to try and cause an upset. With our recent promotion to the Dafabet WPL, we now have teams coming to us with that mentality so we need to be at the top of our game to make sure we're not on the end of a 'giant killing'. MET: You mention the promotions through the divisions, how have things changed at the club since you arrived? WF: A lot has changed since the League 3 days, we now have some fantastic facilities which has improved things at the club and with the promotions has come more exposure and everything that comes with it. Several things have remained the same though and thatâ&#x20AC;&#x2122;s the way we like to play our football and the attitudes of everyone associated with the club. Everyone is still ambitious for more, to keep developing and to progress both as a club and as individuals and the first thing we can do is to make sure we perform well and pick up a result in the cup. MET: We've been on a good run in the league lately, looking ahead to the split what are the targets for the season? WF: We have, the home form of late has been great and thatâ&#x20AC;&#x2122;s seen us pick up points, we're not getting ahead of ourselves though, we're under no illusions about the size of the task still ahead of us with some tough away trips. I know a lot of the boys have said it already but the focus is still on maintaining our status for next season, if that happens by being in the top six at the split we can adjust our targets but if not, we'll be fighting to stay up and be in the league next year.

MET: Thanks Will, good luck today!

Opposition Analysis Julian Williams Joined Port in August 2016 after spending a season on loan from Rhyl FC in 2015/16. He made his first team debut for Rhyl in April 2015. A quick, skilful forward with a dangerous left foot shot. Has a great attitude and works hard for the team. He spent most of 2014/15 season on loan at Holyhead Hotspur and also spent time on loan with Holywell Town. His former clubs include Llandudno and Llanrwst United

Craig Papirnyk (Manager) Craig joined Porthmadog in August 2013 as a player and later player coach from his home town club Barmouth and Dyffryn FC. In May 2014 he succeeded Gareth Parry as club manager and went on to enjoy an outstanding first season in that role. He immediately set about rebuilding the squad and the coaching team, bringing in several young players who have gone on to make their mark at the Traeth. Craigâ&#x20AC;&#x2122;s previous clubs also include Bala Town and Ruthin Town and as a 22 year-old player-manager he lead Barmouth to the Gwynedd League title in 2006/07, taking the club into the third tier of Welsh football for the first time in 35 years. @cardiffmetfc

The Final Word Cardiff Met FC is more than just the first team you see today, with a reserves and youth team, plus 5 sides competing in BUCS (British Universities & Colleges Sport) leagues. We also have a fully FAW accredited academy. BUCS Round-up The first team drew 0-0 with a strong Bath side and sit second in the Premier South table. The second team also sit second after beating Southampton 1st team 1-0.The third team drew 0-0 with Aberystwyth 1st team and the fourths beat Cardiff 4ths 4-0. The 5th team were defeated 2-0 at Trinity St David.

Reserves Team The reserve team sit top of the Welsh League Reserve Division East with 8 wins from 8, and a goal difference of +56! The team travel to Llantwit Major reserves today so keep an eye on twitter for their result to come in. Youth Team A mid-season friendly win over Cambrian and Clydach (4-2) preceded a 4-1 win away at Barry Town. The youth team sit 3rd with three games in hand over the teams above and next face Haverfordwest at home on Sunday the 11th where entry as always is free! Social Media Social media is the easiest way to keep up to date with all the goings on at Cardiff Met FC. We have a Facebook page and Twitter (@CardiffMetFC), where you can find post match interviews and info on upcoming games and we also have a brand new website which can be found at www.cardiffmetfc.com. @cardiffmetfc