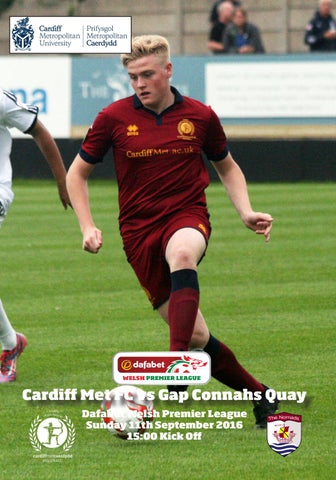 We take a look at the history of Gap Connahs Quay.

Emlyn Lewis talks to the programme about the the recent games against TNS and Rhyl.

A selection of match photos from our games against TNS and Rhyl.

A round up of recent results for all our Cardiff Met teams.

Chairman’s Welcome Firstly, I'd like to welcome all associated with Connah’s Quay Nomads to the Swan Arena this afternoon. Croeso cynnes. Football is both simple and complex. Simple in terms of its basic aim (to score more than the opposition) and the relative absence of rules (in comparison with others sports like, for example, rugby). But that absence of regulation brings with it a complexity, as many variables are brought into play (e.g., a ball can be passed in any direction, players can move anywhere on the field when they decide, there are no limits on who attacks and who defends, no limits on possession, and so forth). It is the job of a coach to somewhat structure this complexity, to give some form and intent to the apparent chaos. Because different coaches employ different approaches toward this end, football is seen to be played in a variety of ways. Witness for example, a ‘longer ball’ game attributed to Sam Allardyce in comparison to the shorter passing approach favoured by Josep Guardiola. No one style is necessarily ‘better’ than the other; something that can only be judged ultimately by outcomes (i.e., winning) which itself is subject to other vagaries like resources and the players available. The aims of such structures and game plans is to gain a degree of control and predictability over process and subsequent outcome. What often happens as a team enters a bad spell is that coaches work harder and focus even more on ‘the plan’. The complexity (and beauty) of football being what it is, quantity of input does not automatically translate to increased output. Ultimately, any game plan is dependent on the people who carry it out, the players. They have to not only believe in its effectiveness, but enjoy the challenge of its implementation (imagine playing in a team whose style you just hate!) No doubt we are somewhat collectively disappointed with the start experienced in the WPL (in terms of points accumulated). But the answer doesn't always lie in greater urgency, anxiety, tighter plans and a hyper defensive mindset. To this degree, the players and staff at Cardiff Met are willing to adopt a degree of vagueness in practice, particularly when in possession. This is where a deeper seated belief in ability (honed through hard work, of course) comes to the fore; where a trust that consistently adhered-to good habits are eventually rewarded. Being old enough to remember Woodstock, I'm all for a bit of hobo-ness…..as long as it brings a positive result! A good luck to all RJ

Today’s Opponents GAP Connahs Quay The first Connah’s Quay club was founded in 1890, playing in the Golftyn area of the town close to the present stadium. The club reached the Welsh Cup finals of 1908 and 1911, but was disbanded soon afterwards. A new club, Connah’s Quay & Shotton, was formed in 1920, becoming members of the Welsh National League (North), as a fully professional outfit, in 1922. In 1928, the club moved to Dee Park, Shotton and won both the Welsh National League (North) championship and the prestigious Welsh Cup in 1929. Six months later, however, Connah’s Quay & Shotton folded, leaving Connah’s Quay Albion to carry the town’s soccer banner through the second war. Formed in July 1946 as Connah’s Quay Juniors, the present-day club was the brainchild of the Everton and Wales centre-half Tommy (T.G.) Jones, a native of the town. The Deeside youngsters flocked to join the new team, winning the Welsh Youth Cup in 1948. A senior team was soon formed and joined the Flintshire League in 1948. Success soon followed and Connah’s Quay Juniors reached the final of the Welsh Amateur Cup in 1950/51. In 1974, the club joined the newly formed Clwyd League and spent more than a dozen seasons at this level, winning the championship twice. Following three successful seasons in the Welsh Alliance, Connah’s Quay became founder members of the Cymru Alliance in 1990 and the League of Wales two seasons later. The club’s home since 1946 was the Halfway Ground, but in July 1998 Nomads moved into the newly constructed Deeside Stadium. Eighteen league victories during 2002/2003 saw Nomads reach the giddy heights of fifth place in the table. In 2006/2007, however, while ground sharing with Flint Town United, Nomads almost qualified for Europe but had to settle for fifth place once again. Yet, soon after the campaign ended, manager Neville Powell left for Bangor City taking his entire backroom staff and seven players with him. Jim Hackett was installed as manager and despite a number of setbacks during the campaign, relegation was avoided. The 2009/10season saw the Nomads slip into the Huws Gray Alliance following the Pyramid re-shuffle. Following a league record breaking successive Huws Gray Cymru Alliance Championship in season 2011/12, The Nomads obtained a domestic licence and returned to the top flight in 2012. The 2013/14 saw a complete re-brand of the Club with a new club crest and colour scheme, to tie the Club’s colours in more tightly with the Connah’s Quay community. The 2015-16 season saw heavy investment in the squad and with the arrival of Andy Morrison, European qualification.

The Big Interview After our midweek Nathaniel MG Cup win over Taffs Well we're back in action in the Dafabet Welsh Premier League. We caught up with Emlyn Lewis ahead of today's clash with Gap Connah's Quay to assess the mood in camp. MET: Siw'mae Emlyn, thanks for taking the time to speak to the programme today. What is the mood like in the camp this week? EL: The mood is good after Wednesday's cup win. There was a nice atmosphere in the dressing room after the game and we'll be looking to make that a more regular feeling now we're back in league action. MET: As you mentioned, it was a good win in the week, what effect will that have moving in to today's game and how do you think the game will go. EL: It was good to get the win and to score 5, we'd worked on attcking play after the Rhyl game and it was nice to see the boys get their rewards for their hard work. I'm sure today will be different, having played Gap Connahs Quay in the cup last year we know they're a physical side who like to get the ball forward early but we'll be ready for that. MET: We currently sit bottom of the table with one point from five games, is it time for the fans to start panicking? EL: Definitely not, other clubs will have spells where they have similar results. Because we have been promoted and its right at the start of the season, the lack of points is amplified. We're certainly not worried. MET: Good to hear! Thanks for speaking to us and good luck today Emlyn.

Opposition Analysis Michael Wilde (22) Wilde joined The Nomads in June 2016 having been released from his contract at The New Saints in early May 2016. During his time at TNS, Wilde scored 151 goals in his 214 appearances. Wilde originally joined TNS (then known as Total Network Solutions) in 2002 from Poulton Victoria. He was the Oswestry-based side’s supporter’s player of the season in the 2004/05 and 2005/06 seasons. Wilde joined Fleetwood Town in January 2009 before moving to Halifax Town and Chester where he netted 36 goals in 43 games before returning to TNS in June 2012, and was voted as the Welsh Premier League Player of The Season in the 2012/13 season. Wilde made his competitive debut for The Nomads in the Club’s rst ever UEFA Europa League match against Norwegian side, Stabæk Fotball in June 2016.

Andy Morrison (Manager) An ex-professional player, Morrison captained Manchester City and played for Plymouth Argyle, Blackburn Rovers, Blackpool, Huddersfield Town, Crystal Palace and Sheffield United. Morrison joined The Nomads in November 2015 with the club sat bottom of the WPL. Morrison revived The Nomads, taking them into the top six before the January split, leading the side to a record highest finish fourth in the 2015/16 Dafabet Welsh Premier League, securing a place in the UEFA Europa League as a result of the end of season play offs. Morrison then led The Nomads to an historic 1-0 aggregate victory over Norwegian side Stabæk in the First Qualifying Round, before being knocked out by Serbian team, FK Vojvodina in the Second Qualifying Round.

Nathaniel MG Cup Round One

The Final Word Cardiff Met FC is so much more than just a first team with a reserves and youth team, plus 5 sides competing in BUCS (British Universities & Colleges Sport) leagues. We also have a fully FAW accredited academy. BUCS Roundup The BUCS season runs during academic term time and Cardiff Met currently has 5 teams competing from The Premier Divison through to Western 5B. Along with Cardiff Met LFC, we are the highest ranked institution for football in the UK. Reserves Team Our reserve side compete in the Welsh League Reserve League West after moving from the East Division at the end of last season. The reserves were due to start their season last weekend but their game against Briton Ferry couldnt beat the rain and was unfortunately postponed. Youth Team The youth team have started strongly in the Welsh Premier Development League South, sitting second after 2 games. A 3-2 win against Carmarthen and 2-2 draw with Cambrian & Clydach has set the team up for another title push this season and they're in action after todays Dafabet Welsh Premier League game so hang aroud for that!

Social Media Social media is the easiest way to keep up to date with all the goings on at Cardiff Met FC. We have a Facebook page and Twitter (@CardiffMetFC), where you can find post match interviews and info on upcoming games and we also have a brand new website which can be found at www.cardiffmetfc.com. @cardiffmetfc