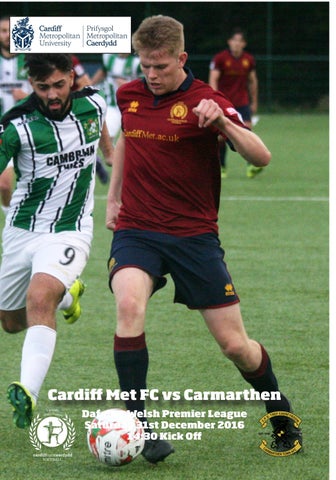 We take a look at the history of Carmarthen.

Match photos from our recent games against Porthmadog, TNS and Newtown.

Chairmanâ&#x20AC;&#x2122;s Welcome Firstly, I'd like to extend a very warm welcome to the players, officials and supporters of Carmarthen Town FC to the Camp Ed for this New Year's Eve fixture. Croeso cynnes i chi gyd. Due to a recent lull in proceedings, I found myself reading the statistical theory relating to 'a regression to the mean'. What is meant here is that if a variable is extreme on its first measurement, it will tend to be closer to the average on its second (measurement). Following such logic, it's not unnatural for a good (footballing) performance to be followed by a not-so-good one, and vice versa. This calls the very act and actions of coaches into question, in that it hardly matters what is said or done in the week, because the mean, in terms of game related performances, always draws towards itself. There's a lot to be said for being a bit more fatalistic here, particularly in terms of coaches' (and supporters') stress levels and general well being. Having said, it's not a perspective we particularly adhere to at Cardiff Met. Rather, we believe that the best of statistical theory still needs interpretation and inference. Hence, while acknowledging a degree of performance fluctuation is somewhat inevitable (especially in young players), our mean is set higher than the general. Our performances then are calibrated at a different level to the average. What makes our interpretation of things even more unique is that such a mean is not taken as being static; it is flexible (i.e., upwardly flexible). A regression to mediocrity (which the original theory was meant to illustrate) is not acceptable. Performances then, are only allowed to regress either side of an ever ascending club-specific mean. Not much else matters. Consequently, only question for staff then is where to place the regressive line; a line which, no doubt, will again be re-evaluated over a beer or three tonight. Fast evolution rules. Blwyddyn neydd dda. RJ

Todayâ&#x20AC;&#x2122;s Opponents Carmarthen FC Carmarthen FC was formed in 1948 and admitted to the Carmarthenshire Association Football League. The present ground, Richmond Park, was created in 1952. Election to the Welsh League came in 1953 with the club gaining its first honours in 1959-60 with promotion from Division 2 West to the First Division of the Welsh League. Progress was patchy in the 70's and 80's with intermittent promotion and relegation in the Welsh League Divisions until the 1995-96 season. This was the best season in the club's history with both the Welsh League title and the Cyril Rogers Cup coming to Carmarthen - a notable double. The following season 1996-97 was Carmarthen Town's first in the National League and another milestone was achieved in the 1999-2000 season when the Club were runners-up in the Welsh Senior Cup under manager Tomi Morgan who had joined the club in mid season. 2000-2001 season was Carmarthen's fifth in the League of Wales. A third position finish saw the club gain qualification for the UEFA Intertoto Cup, an honour that had been denied them on goal difference the previous season. Carmarthen hold the record for the highest European score of any Welsh team as they defeated Eircom League outfit Longford Town 5-3 on aggregate in 2005.

The Big Interview As we wrap up 2016 with a New Years Eve game, we spoke to club stalwart Liam Black to look back over the year and ahead to what can hopefully be a succesful 2017. MET: Hi Liam, thanks for talking to us today. We face Carmarthen in today's game, what are you expecting from the fixture? LB: We are expecting a tough game today. Carmarthen are in a similar league position as us and are fighting for the same things as us. Hopefully another solid performance can help us get a result. MET: You're heavily involved in both coaching the second team whilst playing at Cardiff Met, tell us a bit about that. LB: At times it is difficult to balance both roles and fit everything in. But, at Cardiff Met there is a lot of help and advice available from staff and players alike. I'm thoroughly enjoying the challenges that both roles bring and the experience I'm gaining will hopefully help me in the future. MET: Looking back over 2016, can you sumarise the year for the club? LB: It's been another fantastic year for us. The objective was always to try and get promoted into the Welsh Prem and we achieved that in the summer. Since then the club has developed and progressed. Our next aim is to be in the Welsh Prem next season and hopefully we can cement that over the next couple of weeks with a top 6 finish. MET: Thanks Liam, Happy New Year and good luck for today!

Opposition Analysis Liam Thomas (18) Liam was born in Swansea on 6 November 1991. He played his junior football with Landore before going on to Neath. He spent a short time with Cardiff City and then moved to Afan Lido. Liam joined Carmarthen in 2012 and went on to be the club's top scorer that year.

Mark Aizlewood (Manager) Mark was born in Newport in October 1959. His career has been well chronicled and included time at Football League clubs Luton Town, Charlton Athletic, Leeds United, Bradford City, Bristol City and Cardiff City. Mark has 39 international caps for Wales, mainly playing in midfield, and is a qualified UEFA coach. He was appointed manager of Carmarthen Town in January 2012. His autobiography, Defending Myself, was published in 2009 to critical acclaim. @cardiffmetfc

Next 3 Programme printed before fixture played

END OF PHASE ONE

The Final Word As 2016 draws to a close its time for a few thank you's... A huge thankyou to all players, staff, club officials and volunteers that help to make this club run, without all of you there would be no club. Next to all the supporters both long term and newly discovered. Your support is valued so highly by all the players and staff and it is great to see mre locals as well as students getting behind us. We hope to see even more coming to Cyncoed in 2017 as WPL football grows in the capital. Thank you to all of the club, player, programme, match and pitchide sponsors. If you would like to continue to support us in 2017 or would like to link your business with us in the new year, please get in touch! Finally, a big thank you to all of the 'unsung heroes'. Those that dont fit into any of the categories above but spread the word about Cardiff Met FC, speak about us to their friends, talk about us at school, share our social media posts and speak positive of us as a club. As we move into 2017 we wish you a happy and prosperous new year and hope to see you at many more fixtures in phase two.