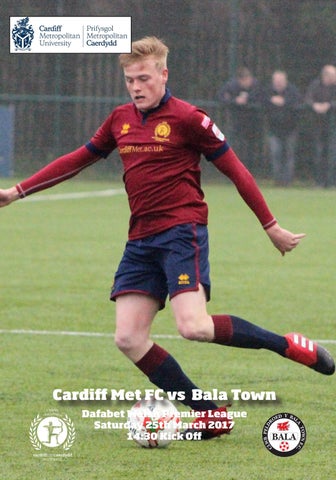 We take a look at the history of Bala Town.

Harry Owen talks to us about his new found internet fame!!

Match photos from our recent games against TNS.

Chairman’s Welcome Firstly, let me extend a warm welcome to the players, officials and supporters of Bala Town FC to the Christiano Bernabéu Stadium for this afternoon's encounter; our latest match in the WPL. Croeso cynnes. Within sociology, the central question is one of structure or agency. Here, agency is the capacity of individuals to act independently and to make their own free choices. By contrast, structure refers to those factors of influence (such as ability, customs or instruction) that determine or limit an agent in his or her decisions. Such is also the conundrum of the football coach; how much freedom and how much restriction should players be subject to or given. Being a relational game, football demands an agreed purpose and, to a certain extent, a consensus on how to achieve that purpose. In this way, structures, far from being restrictive, are also very enabling; they allow and engineer a collective effort, a joint enterprise, often with the whole being greater than the sum of individual parts. On the other hand, players are not robots and the coach (as much as he or she would like to be) is not at the helm of FIFA 17 game console. By definition, players are the ones who must ‘play the game’ and, hence, because every game is new and novel, they must exercise discernible judgment over their contribution in and to that game. This, however, is not a call for players to have unfettered freedom to make decisions (as in some naive empowerment strategy). Rather, it is an encouragement of agency in relation; in relation to their contribution to the greater workings of the ‘game plan’ (usually decided by the coach). Individuality, therefore, should be both expected and curtailed in players; often expected when attacking and curtailed when defending. Turning to Cardiff Met, in recent games, the balance between these two foci has not been quite right. As in all things human, however, the basic structures and expectations of the phenomenon (in this case, football) have to be adhered to before individual expression can be seen to count. This is the challenge we currently face; to stay defensively competitive enough so as to allow our desired forward to play to have decisive impacts. As always, the players and staff are working hard on it. Finally, it would be remiss in these musings not to mention the Club’s wonderful mid-week achievement of securing the BUCS Championship. Although some dismiss student football as sub-standard, BUCS is a very elusive and difficult beast to tame; after all, every university in the country (from 10,000-40,000 students) can boast 11 decent footballers! Our victory demonstrates the forward trajectory of the Club; where solid lines of structure are complimented by indomitable, sincere agency. On to the next one… Lwc dda i bawb RJ

Today’s Opponents Bala Town Bala’s early history is not well documented but first memories are of a team in the early 1880’s playing games on the Lake foreshore. Bala North End and Bala South End competed until 1897 when Bala Thursdays was formed and played on Castle Park. The Bala Press Team was established then in the 1900’s and became one of the best amateur sides in North Wales. The first available League status record is of Bala playing in the Welsh National League North Division 2 East in 1921/22 Season Bala have been at Maes Tegid since the early 1950’s and in 2008/09 the club achieved promotion to the Welsh Premier, crowned Huws Gray Cymru Alliance League Champions without kicking a ball as their nearest rivals Holyhead Hotspur lost to Flint Town. The 09/10 season saw the club finishing 11th of 18 and Bala Town took their place among the elite ‘Super 12’ for the 2010/11 season.

Premier and their highest ever position (2nd). 2015/16 was another successful campaign for the Lakesiders. A successive second place finish in the Welsh Premier League after only losing 6 WPL fixtures all season saw them secure European qualification on the final day of the season.

In 2012/13, a John Irving 89th minute winner against Port Talbot Town secured a European place for Bala Town for the first time in their history. 2014/15 saw new faces arrive at Maes Tegid with Huw Griffiths joining the management and Town’s lineup taking on a more youthful look. The season got o to a superb start with Bala firmly placed in the top three by Christmas and going into the nal match of the season, Town sat in 2nd, 3 points ahead of Airbus in 3rd. A bumper crowd saw a 1-1 draw and qualification for the Europa League for the 2nd time in their history. The Club broke their highest points tally (59) in the Welsh

The Big Interview With this season being the clubs first on popular computer game Football Manager, several players have been keeping us up to date with their progress via Twitter. One player, Harry Owen, has found online fame through the game via YouTube vlogger Loki Doki. Harry told us all about it in this weeks 'The Big Interview'. MET: Hi Harry, thanks for talking to us today. How were you first made aware of your YouTube stardom? HO: I was made aware of this through twitter, people kept mentioning me that I'm a 'legend' on this guys YouTube channel so I checked his channel out and I could not believe what I was seeing. MET: Tell us about your virtual career in Loki Doki's game. HO: So Loki Doki is the guy who has created this YouTube channel, it basically is him filming himself playing football manager. He started at Cardiff Met where I had a good career scoring quite a few goals for him and then it all escalated from there, since then he has taken me to the likes of Lazio and wolfsburg. MET: And what has the reaction been like from other FM players and followers on Twitter? HO: The reaction has been mad, especially on twitter. I get new mentions and followers everyday, even #allhailtheowen has been mentioned a few times on twitter. MET: Finally, what are your ambitions for the rest of the season and beyond? HO: The ambitions for the rest of the season is too keep my place within the first team, making sure I'm ready when I get my chance to come off the bench and make an impact. Hopefully there will be more more chances to show that I'm more than capable at playing at this level. MET: Thanks Harry!

Opposition Analysis Chris Venables Unveiled before Bala’s Europa League match v AIK, Venables’ signing stole the headlines in a shock move from Aberystwyth Town back in July 2016. The WPL’s top goalscorer for three years running, Chris started out at Shrewsbury Town before stints at Welshpool, Caersws, Aberystwyth Town and Llanelli. A Welsh Cup winner, he was named WPL Player of the Year in 2013/14 and is well known for his strong presence in midfield and his prolific goalscoring record netting 128 goals in 339 goals in the Welsh Premier alone.

Colin Caton (Manager) Celebrating 14 years at Maes Tegid, Caton is no stranger to Welsh football and is the longest serving manager in the Welsh pyramid. His leadership has seen the Lakesiders winning the Cymru Alliance title and two successive second place nishes in the Welsh Premier League with numerous Cup wins and three appearances in the UEFA Europa League to date with over 500 games in all competitions with the Lakesiders. Currently undertaking the UEFA Pro Licence.

Wednesday saw the culmination of all BUCS sports at the Big BUCS Wednesday final held in Bath.

Reserves Team The reserves can be crowned champions for the third successive season with one win but were made to wait after last weekends game at Garden Village was postponed.The team are on track to achieve their goal of an 'Invincibles' season. Keep an eye on our Twitter to see if they can do it!

Youth Team Cardiff Met Development side have moved to 4th in the Welsh Premier League South following consecutive victories over Risca United and Merythr town. A hard fought draw last Sunday against Penybont, which saw 10 goals scored, means CMU youth will be keen to tighten up their defences come Sunday. With three games in-hand, CMU will travel to Aberystwyth this Sunday in a tricky fixture at The Seasiders.