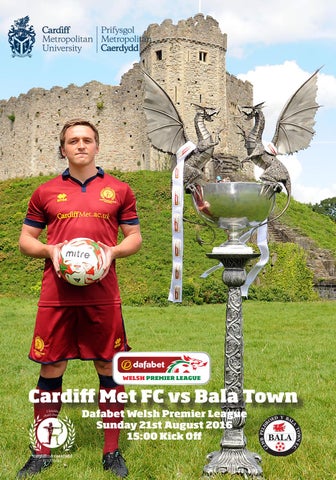 We take you on a whistlestop tour of Bala Town’s history.

Bradley Woolridge talks to The Met about promotion, the media and his hopes for the Dafabet WPL season.

A selection of match photos from our game against Airbus.

A round up of all thngs Cardiff Met

Chairman’s Welcome Firstly, let me extend a warm welcome to the players, officials and supporters of Bala Town FC to Cyncoed for this afternoon’s encounter; our first home game in the WPL. Croeso cynnes. Reading some of the ‘expert’ comments regarding our promotion to the WPL made me smile; some had us already relegated, while others had us threatening a European place! The rationale for the (overly) optimistic latter prediction was largely based on the belief that we had ‘very good resources’; referring to the availability of considerable sport science and facility support. No doubt such things can and will help. Of far greater importance, however, remains the Club’s human resource. This is not so much in terms of staff and player numbers or even the assumed ‘quality’ evident (we leave that for others to judge). Rather, it lies in how much better we believe we can be, and in the burgeoning desire to realise it. Since the Club was essentially re-launched a few years ago, a dynamic strategy of progression was consciously decided upon. The journey has not always been easy or straightforward, but the developmental promise has kept a consistent purpose to action. This then, remains our greatest asset; the refusal to think of a destination reached; the desire to prove doubters wrong; like a traveller with eyes on the ever receding horizon; a desired point of reference, never reached. This is why last week’s result at Airbus, although disappointing in itself, was also heartening. Here, a tentative first half performance gave way to a far more assured second. There was evidence of learning. We know the season will be tough, with every point having to be hard won. To be competitive, we will have to exist at the edge of our capabilities. That realisation, however, is a challenge we relish. The players and staff have a personal contract with themselves to explore and thrive in new territory. To do so, we must let go of the old and embrace the new. Borrowing from the French writer and philosopher André Gide, we must (and will) ‘have the courage to lose sight of the shore’ so that new oceans can be discovered. A good luck to all. Hwyl fawr. FAW Fair Play The aim of the FAW Fair Play Award is to encourage a reduction in on-field misconduct and promote the FAW Fair Play Code. The FAW, players and their clubs have a duty to raise awareness of the Fair Play message for the good of Welsh football. The good name of football has survived because the vast majority of people who love the game are honest and fair. Those who defend football’s good reputation deserve the recognition of the FAW. As a result the FAW will honour and publicise these fine examples through the Fair Play Award. The FAW will reward clubs who are making a significant contribution to improving the behavioural standards in football. Through such collective responsibility the FAW aims to promote team play through Fair Play.

Today’s Opponents Bala Town Bala’s early history is not well documented but first memories are of a team in the early 1880’s playing games on the Lake foreshore. Bala North End and Bala South End competed until 1897 when Bala Thursdays was formed and played on Castle Park . The Bala Press Team was established then in the 1900’s and became one of the best amateur sides in North Wales. The first available League status record is of Bala playing in the Welsh National League North Division 2 East in 1921/22 Season Bala have been at Maes Tegid since the early 1950’s and in 2008/09 the club achieved promotion to the Welsh Premier, crowned Huws Gray Cymru Alliance League Champions without kicking a ball as their nearest rivals Holyhead Hotspur lost to Flint Town .The 09/10 season saw the club finishing 11th of 18 and Bala Town took their place among the elite ‘Super 12’ for the 2010/11 season. In 2012/13, a John Irving 89th minute winner against Port Talbot Town secured a European place for Bala Town for the first time in their history. 2014/15 saw new faces arrive at Maes Tegid with Huw Griffiths joining the management and Town’s line-up taking on a more youthful look. The season got off to a superb start with Bala firmly placed in the top three by Christmas and going into the final match of the season, Town sat in 2nd, 3 points ahead of Airbus in 3rd. A bumper crowd saw a 1-1 draw and qualification for the Europa League for the 2nd time in their history.The Club broke their highest points tally (59) in the Welsh Premier and their highest ever position (2nd). 2015/16 was another successful campaign for the Lakesiders. A successive second place finish in the Welsh Premier League after only losing 6 WPL fixtures all season saw them secure European qualification on the final day of the season.

The Big Interview Its been a big summer of change at Cardiff Met FC; with promotion to the Dafabet Welsh Premier League has come a lot of attention. We caught up with club captain Bradley Woolridge to talk about preseason, media commitments and the expectations for the new season.

MET: Hi, Brad, thanks for speaking to us today. Firstly, tell us a bit about how preseason has gone. BW: It’s been tough! We’ve packed a lot into the last 6 weeks, a good mix of running, ball work, and game time for all of us. We’ve worked on various things throughout pre-season which will hopefully help us to make the step up to the WPL. Overall, a successful pre-season. MET: With promotion to the Dafabet WPL, have you noticed an increase in media attention at all? BW: There has been a massive increase in media attention over the last few weeks. In recent years everything is very low key, but coverage has been much more frequent in the build-up for this season. It’s been a good opportunity for us to experience media work in preparation for the exposure that will be apparent throughout the season. MET: What are your hopes and expectations for the 2016/17 Dafabet WPL campaign? BW: We acknowledge that we are making a step-up in standard this season and have to be realistic with our ambitions. Our first aim is to remain within the league, and establish ourselves as a WPL club; anything after that is a bonus. MET: Thanks Brad and good luck!

Opposition Analysis Chris Venables Unveiled before Bala’s Europa League match v AIK, Venables’ signing stole the headlines in a shock move from Aberystwyth Town back in July 2016. The WPL’s top goalscorer for three years running, Chris started out at Shrewsbury Town before stints at Welshpool, Caersws, Aberystwyth Town and Llanelli. A Welsh Cup winner, he was named WPL Player of the Year in 2013/14 and is well known for his strong presence in midfield and his prolific goalscoring record netting 128 goals in339 goals in the Welsh Premier alone.

Colin Caton (Manager) Celebrating 14 years at Maes Tegid, Caton is no stranger to Welsh football and is the longest serving manager in the Welsh pyramid. His leadership has seen the Lakesiders winning the Cymru Alliance title and two successive second place finishes in the Welsh Premier League with numerous Cup wins and three appearances in the UEFA Europa League to date with over 500 games in all competitions with the Lakesiders. Currently undertaking the UEFA Pro Licence. @cardiffmetfc

The Final Word Cardiff Met FC is so much more than just a first team with a reserves and youth team, plus 5 sides competing in BUCS (British Universities & Colleges Sport) leagues. We also have a fully FAW accredited academy. BUCS Roundup The BUCS season runs during academic term time and Cardiff Met currently has 5 teams competing from The Premier Divison through to Western 5B. Along with Cardiff Met LFC, we are the highest ranked institution for football in the UK. The Reserves Our reserve side compete in the Welsh League Reserve League West after moving from the East Division at the end of last season. The reserves leave the East in search of a new challenge having been back to back champions. Almost all of our Welsh Premier League side have spent time in the reserves and it is a fantastic breeding ground for young players. The Youth Our youth team was formed for the 2015/16 season and enjoyed an impressive first season finishing second in the Welsh Premier Youth Division South and winning the League Cup. Social Media Social media is the easiest way to keep up to date with all the goings on at Cardiff Met FC. We have a Facebook page and Twitter (@CardiffMetFC), where you can find post match interviews and info on upcoming games and we also have a brand new website which can be found at www.cardiffmetfc.com. @cardiffmetfc

Contents of the match day programme for the 2nd match in the Welsh Premier League versus Bala Town.

Contents of the match day programme for the 2nd match in the Welsh Premier League versus Bala Town.