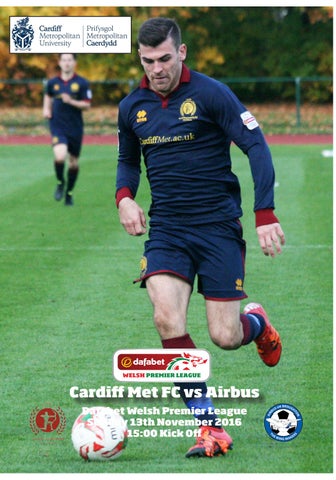 We take a look at the history of Airbus.

Martin Longworth gives us his views on all the Cardiff Met FC teams from 1sts through to the academy sides.

Match photos from our games against Rhyl and Bala.

Chairman’s Welcome Firstly, let me extend a warm welcome to the players, officials and supporters of Airbus FC to the Christiano Bernabéu Stadium for this afternoon's encounter; our latest match in the WPL. Croeso cynnes. The footballing events of last week at the Club, and in particular the loss against Bala, highlighted issues of respect and the paying of debts. Firstly, officials, no matter our view of them, deserve respect. In questioning the referee’s ‘perception of reality’ (or such like) last week, I dipped below required standards. After all, without officials, there is no game. A fine has been paid. Simply to move on, however, is not sufficient as if the slate has been magically wiped clean. The episode should (read will) be learned from; not to be repeated. Similarly, our first half performance at Maes Tegid dipped below expectations; what the staff expected of the players and what the players expected of themselves. In doing so, the initiative was immediately surrendered. Our recent improved league run then appeared to hold the seeds of our immediate demise. The second half was much better, but the damage had been done and not quite (despite some good effort) retrievable. As my own, this was a lesson about respect. Not quite respecting enough the need to compete, the need to hold structure, and the need to operate at a generally higher level of urgency for the 90+ minutes over which the game is played. Bala didn’t wait for us to respect the task in hand, why should they? This is the fight we currently face; that for consistency. Of course, this is not unique to us; as witnessed by even the great All Blacks losing against the Irish last week thus ending their record breaking winning streak. As always, Steve Hansen’s words got straight to the point; ‘We allowed ourselves to be dominated’. They were complicit in their own demise. Like us, they didn’t quite respect enough the demands of the occasion, that when you wear a sporting jersey, there simply is no day (or 45 minutes) off. The immediate price we paid was disappointing defeat, a long twisted journey back, and only a semi-quasi-enjoyable Sunday. The next game must now be engaged with. Not by wallowing in defeat, but by acknowledging it, and learning from it. This is the real debt to be paid. The debt of commitment to the game; the debt to live up to our motto, ‘I lwyddo rhaid chwarae’ (‘If we play, we win’). We all need to do better; to respect better. We will. A good luck to all. Hwyl fawr. RJ

Todayâ&#x20AC;&#x2122;s Opponents Airbus Broughton UK FC The club was formed 1946 and has played in both Chester & District League and the Welsh National League (Wrexham area). Their last move, into the Welsh pyramid system, saw them canter to the Welsh National League (Wrexham area) Division Two title during the 1991/92 season winning it by a clear nineteen points. They then spent four seasons in Division One, the first two seasons finishing sixth then, in third season, two places better in fourth. Season 1995/96 saw a further promotion, finishing runners-up behind Wrexham Colts at the end of the campaign: enough to see them move into the Premier Division of the Welsh National League along with the divisional champions. Once again they spent four seasons at that level, the first two witnessing steady consolidation, finishing seventh and sixth respectively. In 1998/99, the side pushed hard for the championship but could only finish runners-up once again, a mere two points behind eventual champions Corwen Amateurs. At last, in 1999/2000, British Aerospace went one better and won the title with 21 victories from thirty matches, finishing their programme four points ahead of Ruthin Town and Penycae. This success meant promotion once again, into the Cymru Alliance league and to coincide with the promotion the club changed its name from British Aerospace to Airbus UK. Continuing the pattern seen after previous promotions, the second term saw a steady improvement after a tough first and in the 2001/02 Airbus UK finished in eighth spot with sixteen wins. The club was clearly ambitious and again showed signs of progress in the 2002/03 season, achieving their highest ever finish of fifth spot in the Cymru Alliance and reaching the NEWFA Challenge Cup final, losing narrowly on penalties. 2003/04 was tremendously successful when Airbus UK took the Cymru Alliance title with considerable ease, winning it by nineteen clear points from closest rivals Buckley Town, and thus gained promotion to the national competition, the Welsh Premier.

The Big Interview Martin Longworth has transitioned from player to coach in his time at Cardiff Met, now overseeing the academy at the club we caught up to get an insight into the club at all levels. MET: Hi Martin, thanks for taking the time to talk to us today. Firstly, can you give us an insight into your role at the club? ML: I currently have two roles at the club; Academy Director and First Team assistant coach. MET: How has the season gone so far in your opinion at all levels of the club? ML:Both the Academy and the First Team took time to adapt to life in their respective Dafabet Welsh Premier Leagues. The First Team have trained hard and kept to task, we have trusted our brand of football and are starting to see the benefits. We currently sit in the top 6, but this is far from an accomplishment, with 8 games to go and the league as tight as it is we must fight for every point and not remain stagnant in our ways. The Academy sides are still in the process of transformation both on and off the pitch. Results have not gone our way as of yet, but If we can emulate the mentality and application of our First Team, then we would have taken a large step forward this season in ensuring that an Academy has been developed to cultivate the young talent within both the club and the local community. MET: Tell us a bit more about the academy set up here at Cardiff Met FC. ML: The academy is in its inaugural year as an FAW licenced and accredited academy, and therefore, have undergone considerable modification in the past few months. We now boast one of the largest academies in South Wales, with 304 registered players, representing 13 teams ranging from U5s to U19s, with four playing in the Dafabet Welsh Premier Academy League(s). All of our coaches hold the necessary FAW and UEFA coaching qualifications as well as meeting child protection and first aid legislations. We endeavour to produce players who aspire to become fundamental members of the First Team squad in future years, support both football and non-football education of our youth players, and, therefore, invest in a high-quality youth development programme.

Opposition Analysis Tony Gray (9) Striker who joined Bangor City in September 2004 from West Cheshire League Division One Club Newton where he had played a part in the club's 2003/4 championship season. Moved to Burscough before making his mark in the Football Conference with Southport, Droylsden, Chester and Telford, scoring 56 goals from 133 (+29) appearances. Notched 20 goals for the Bucks in 2014/15 and was voted club and players' player of the season, but left to join Airbus UK Broughton at the end of the campaign.

Andrew Thomas (Manager) Chester-born Thomas is a former Airbus player who has been a part of the coaching set-up since 2007 and acted as Preece's assistant from July 2015. Thomas enjpyed a long Welsh Premier career, first joining Connah's Quay Nomads before moving to Cwmbran Town in the 1999/2000 season, but played just twice before returning to the Nomads. In 2001 he joined Newtown, moving to Airbus and, at the end of his first season, won the Cymru Alliance and with it promotion to the WPL. Thomas made a total of 152 (+30) league appearances, scoring five goals. Works in the Airbus plant as a skilled fitter on the A320 production line. @cardiffmetfc

The Final Word Cardiff Met FC is more than just the first team you see today, with a reserves and youth team, plus 5 sides competing in BUCS (British Universities & Colleges Sport) leagues. We also have a fully FAW accredited academy. BUCS Roundup The first team sit top of BUCS Premier South after beating Hartpury 2-0 and beating last years British Champions USW 1-0. The seconds sit second in league 1A whilst the 3rd team sit sixth in league 3B. The 4th team are currently third and 5th team sixth in their respective leagues. Entry to any BUCS game is free and fixtures are available on the BUCS website.

Reserves Team The reserves are now top of the Wels Football League Reserve Division West outright after beating closest rivals Penybont Reserves 7-0. After 8 games the team sit top with 8 wins from 8 having scored 62 goals and conceding just 6! Youth Team After 5 Dafabet Welsh Premier Development League South games the youth team sit fourth on 11 points in a highly competitive league. With games in hand over teams above and one of only two unbeaten teams, the youth will be looking to push on in the next few weeks. Social Media Social media is the easiest way to keep up to date with all the goings on at Cardiff Met FC. We have a Facebook page and Twitter (@CardiffMetFC), where you can find post match interviews and info on upcoming games and we also have a brand new website which can be found at www.cardiffmetfc.com. @cardiffmetfc

To enquire about match sponsorship or any other sponsrship opportubnity, please contact: