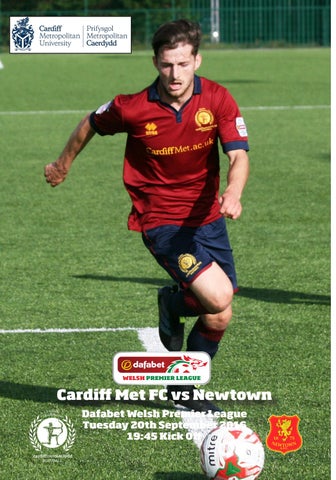 We take a look at the history of Newtown.

Youngster Harry Owen talks to the programme about his ascent into the first team and his hopes for the season.

Match photos from our games against Gap Connahs Quay and Llandudno.

Chairman’s Welcome Firstly, I'd like to welcome all associated with Newtown to Cyncoed this afternoon. Croeso cynnes. Football is both simple and complex. Simple in terms of its basic aim (to score more than the opposition) and the relative absence of rules (in comparison with others sports like, for example, rugby). But that absence of regulation brings with it a complexity, as many variables are brought into play (e.g., a ball can be passed in any direction, players can move anywhere on the field when they decide, there are no limits on who attacks and who defends, no limits on possession, and so forth). It is the job of a coach to somewhat structure this complexity, to give some form and intent to the apparent chaos. Because different coaches employ different approaches toward this end, football is seen to be played in a variety of ways. Witness for example, a ‘longer ball’ game attributed to Sam Allardyce in comparison to the shorter passing approach favoured by Josep Guardiola. No one style is necessarily ‘better’ than the other; something that can only be judged ultimately by outcomes (i.e., winning) which itself is subject to other vagaries like resources and the players available. The aims of such structures and game plans is to gain a degree of control and predictability over process and subsequent outcome. What often happens as a team enters a bad spell is that coaches work harder and focus even more on ‘the plan’. The complexity (and beauty) of football being what it is, quantity of input does not automatically translate to increased output. Ultimately, any game plan is dependent on the people who carry it out, the players. They have to not only believe in its effectiveness, but enjoy the challenge of its implementation (imagine playing in a team whose style you just hate!) No doubt we are somewhat collectively disappointed with the start experienced in the WPL (in terms of points accumulated). But the answer doesn't always lie in greater urgency, anxiety, tighter plans and a hyper defensive mindset. To this degree, the players and staff at Cardiff Met are willing to adopt a degree of vagueness in practice, particularly when in possession. This is where a deeper seated belief in ability (honed through hard work, of course) comes to the fore; where a trust that consistently adhered-to good habits are eventually rewarded. Being old enough to remember Woodstock, I'm all for a bit of hobo-ness…..as long as it brings a positive result! A good luck to all RJ

Today’s Opponents Newtown FC Newtown Football Club is one of the oldest clubs in Wales, formed in 1875 and was a founder member of the FAW. Newtown took part in the first ever Welsh Cup tie on Saturday 13th October, 1877 against Druids of Ruabon. Wrexham went on to win that inaugural competition, but the following year Newtown Whitestars beat Wrexham 2-1 at Oswestry and became the first club to receive the now famous trophy which had only been purchased a few months earlier. Over the years, the club have played at a number of grounds but the Officers of the late 1940s took the far-sighted decision to purchase and construct a new playing headquarters at a new site which was named “Latham Park”. This was in honour of a local sporting hero, Captain George Latham who played for Liverpool, Stoke and Cardiff City and was capped 12 times for Wales at the start of the 20th century. He was a decorated war hero and went on to lead the British Olympic team. Many ground improvements have been made at Latham Park with the large “Control Techniques” stand having 420 covered seats and dressing rooms for club and community use. This was erected in 1997 and then a South stand was added at the Llanidloes Road end of the ground, but was not covered. Another new stand was added in 2007 seating a further 180 spectators and is fully covered. Our total seated accommodation is 1382, making it one of the biggest Welsh Premier League stadiums in the country During the 2004/5 season, the clubhouse was extended, new floodlights and new drainage on the pitch, whilst a second storey Media/Control room was added in 2011. Newtown was the first club in Wales to be awarded the prestigious UEFA licence in 2004 and the Club has enjoyed a good taste of European football, first in the late 90s when they played against Skonta Riga (1996) and then Karkow (1998) before a 17 year wait for a further expedition when the team not only played in Europe again in 2015. Founder members of the League of Wales in 1992, Newtown finished runners up on two occasions before a trimmed budget saw the side slip down the league although they were relegated. Chris Hughes has been in post since 2013 with highlights of his tenure including drawing Valletta of Malta in the 3rd Qualifying round of the Europa Cup. Newtown beat their opponents 2-1 and 2-1 to go through to the 2nd round before losing out to the mighty Copenhagen 5-2 on aggregate. That season also saw Newtown reach the final of the Welsh Cup, losing to TNS 2-0 in the match which was staged at Newtown on the new 3G pitch.

The Big Interview The latest of a long line of players to progress through the youth and reserve sides at Cardiff Met FC, wideman Harry Owen has featured in the last two first team fixtures. We caught up with Harry ahead of tonight's game with Newtown to discuss his rise and his hopes for the season.

Hi Harry, thanks for taking the time to speak to us today. Firstly, you're the latest of many players to have progressed through the system here at Cardiff Met FC, tell us a bit about the way players can work their way into the first team.

It's a great system at Cardiff Met where all the teams are connected, meaning you can work your way up from the youths to reserves and then to the firsts. Having this system gives everyone a chance of making it to the first team if they have the ability.

HO: Hopefully I can keep my place within the first team and over time improve as a player. The goal is to make an impact as a player by adding a few goals and showing that I'm more than capable at playing at the Welsh premier league standard. MET: Thanks Harry, good luck tonight! 10

Opposition Analysis Shane Sutton (6) Former Welsh U17 and U23 international Sutton is widely regarded as one of the most experienced defenders in the league. Joining from Shrewsbury Town in 2007, a brief spell at Presteigne followed, before returning. Last season suffered a nasty leg break, but this campaign will be his 10th season as a Robins. Chris Hughes (Manager) Chris joined the Robins in November 2014 after a successful spell as Neil Gibson's assistant manager at Prestatyn Town. Hughes, formerly assistant at Rhyl, Buckley and Caersws, guided Newtown into the top sixfor the 2014/15 and 15/16 seasons, while also leading his side to a Welsh Cup Final. He also guided the club to their first European campaign in 17 years as a result of the 2014/15 campaign and their first ever Europa League win beating Valletta 4-2 on aggregate. Hughes has also worked for the Welsh Football Trust and his currently taking his Pro-Licence course. @cardiffmetfc

The Final Word Cardiff Met FC is more than just the first team you see today, with a reserves and youth team, plus 5 sides competing in BUCS (British Universities & Colleges Sport) leagues. We also have a fully FAW accredited academy. BUCS Roundup The BUCS season runs during academic term time and Cardiff Met currently has 5 teams competing from The Premier Divison through to Western 5B. Along with Cardiff Met LFC, we are the highest ranked institution for football in the UK. Reserves Team Our reserve side compete in the Welsh League Reserve League West after moving from the East Division at the end of last season. The reserves sarted their campaign with 6-2 win over Potardawe including a hattrick from Tim Parker. Youth Team The youth team have started strongly in the Welsh Premier Development League South, A 3-2 win against Carmarthen, 2-2 draw with Cambrian & Clydach and 6-0 win over Port Talbot sees the team sitting joint top on 7 points after 3 games. Social Media Social media is the easiest way to keep up to date with all the goings on at Cardiff Met FC. We have a Facebook page and Twitter (@CardiffMetFC), where you can find post match interviews and info on upcoming games and we also have a brand new website which can be found at www.cardiffmetfc.com. @cardiffmetfc