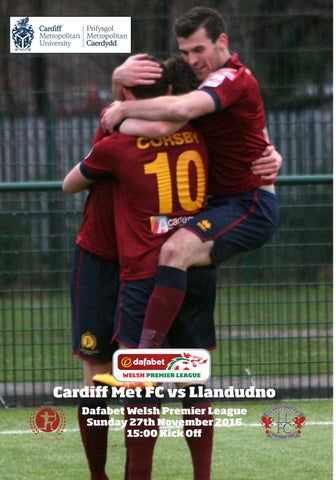 We take a look at the history of Llandudno.

Match photos from our game against Bangor.

Chairmanâ&#x20AC;&#x2122;s Welcome Firstly, I'd like to welcome all associated with Llandudno to Cyncoed Campus this afternoon. Croeso cynnes.

One of a coach's toughest assignments is to keep those squad players who don't regularly start games happy. Often it's not a question of them having less ability or giving less effort. Rather, it's an issue of ingredients just mixing in a process beyond the wit and wisdom of coaches; combinations sometimes just work . Of course, some educated guesswork is integral to the process, but a wise coach knows the future can't be 'seen', it can only be inferred from what has gone before. In essence, we don't know if selections work out, we just guess at them. So, the question inevitably arises, 'what informs this guess work?' Here, I can say with certainty that at Cardiff Met many factors go into the mix. This relates to both on (including training) and off field performances. What has been seen (or rather interpreted) over the short and (to a lesser extent) medium terms form the basis for the coaches' discussions and selections. It a process that begins an hour or so after a game has finished and runs to about two hours before the next one begins. It is, to all intents and purposes, a process without interruption. In addition, the factors under consideration are also not always immediately visible or agreed upon by staff, which adds another level of interpretation and complexity. This has become ever more difficult with the success of our reserves and the BUCS Wednesday team, which at the time of writing, head up both their respective leagues. Success demands attention, and many players have performed well in achieving that success. Although Ron Atkinson's somewhat witty lament that the key to good coaching is to 'keep the 11 selected who love you, away from the 6 not selected who hate your guts' has a grain of truth about it, things are never quite so simple. Still, I have little doubt that the success described above is a considerable factor responsible for 1st team player motivation. Without over egging the insecurity, the starting players know that if they don't perform consistently others are just waiting for the opportunity to show what they can do. It is to those players then, that a great deal of credit should go for our WPL season to date. They show to the others that the jersey matters; playing for Cardiff Met matters. They matter. A good luck to all

Today’s Opponents Llandudno FC Football in Llandudno dates back to 1878 when the club was originally known as Gloddaeth Rovers for around a decade. The club was re-formed and renamed Llandudno Football Club in 1988. The club was formed for the purpose of providing activity for cricketers during their close season. A full international, Wales v Ireland, was played on the "council field" in 1898. Llandudno were founder members of the Welsh National League (North) in 1921 and were champions in 1923 and League Cup winners in 1930. The club won the North Wales Combination FA Cup in 1926 and the North Wales Amateur Cup in 1929. Controversy struck the club in 1931 when the FAW instructed them to play in East Wales, which Llandudno refused and were suspended. Llandudno were founder members of the Welsh League (North) in 1935 and remained in the league until war broke out in 1939 and then rejoined in 1945 and stayed till 1974. Llandudno were League champions in 1936 and repeated the feat the following season, in addition the club won the North Wales Amateur Cup in 1948 and 1962, the Alves Cup in 1951 and the Cookson Cup in 1965. The club moved to its current home at Maesdu Park in 1991 after the "council field" was used for the construction of an ASDA store in the late 1970s, now the new Parc Llandudno. The current ground was officially opened in 1991 and floodlights were added in 1994. The following season saw the erection of a clubhouse and two small stands which provide covered seating for 130 spectators. The club has in the past few seasons undergone major transitions, with the addition of a new press box. In season 2004–05 new dressing rooms were completed. New grandstands, with disabled access, are in place and the stadium now meeting the criteria set down for Welsh Premier League football. In August 2014, Wales national football team manager Chris Coleman visited Maesdu Park to officially open Llandudno's new £420,000 3G pitch. After a successful 2014–15 Cymru Alliance season, Llandudno were promoted as champions to the Welsh Premier League for the first

In July 2015, Llandudno FC entered into a significant strategic partnership with local organisation, MBi Consulting Ltd. as such the club was known as MBi Llandudno Football Club and Maesdu Park was renamed as Park MBi Maesdu. Llandudno enjoyed a remarkable first season in the Welsh Premier League which saw them finish 3rd and earn them a place in the Europa League for the first time in their history in 2016–17.

The Big Interview Dan Spencer sat down with us this week to talk today's game, his involvement and the clubs targets for the season. MET: Hi Dan, thanks for taking the time to chat to us. Today's game sees us face Llandudno who are currently one place below us. Whatâ&#x20AC;&#x2122;s the mood in camp like and what has the approach been going in to today's game? DS: We Know Llandudno have quality and their league position shows that. They we're in Europa League action at the start of the season so we're aware of how good they are. Our season was kickstarted by the 1-0 away win and we'll be looking to do the double over them. Our approach as always has been carefully thought through and we're looking forward to the game. MET: You've been heavily involved in both the Dafabet WPL team and the BUCS side, what are the advantages and disadvantages of the club being involved in so many fixtures? DS: BUCS has been a great opportunity for players not involved on the weekend to pick up game time at the highest standard of university football. Of course more games can be an issue but we've managed since the club was started and its been useful so far this year MET: Throughout the season many people have asked what the clubs aims are for the year, after the recent run of form, what is the aim for the team now? DS: The target hasn't changed at all, we're still fully focused on maintaining our Welsh Premier League status. If we do that by being in the top 6 at the split then great, if not we'll look to be outside the bottom two positions come the last day of the season. MET: Thanks Dan, good luck today!

Alan Morgan (Manager) After a playing career thats saw Morgan make over 120 apearances, Alan began his managerial career as player/ manager of Cefn Druids. A spell as assistant at Bangor followed before taking the Aberystwyth job. Morgan has been in charge of Llandudn since 2012, taking the club in to the WPL and Europa League in consecutive seasons. @cardiffmetfc 17

The Final Word Cardiff Met FC is more than just the first team you see today, with a reserves and youth team, plus 5 sides competing in BUCS (British Universities & Colleges Sport) leagues. We also have a fully FAW accredited academy. BUCS Roundup A fine day in BUCS on Wednesday saw the first team defeat UEL 3-1 and the second team beat Surrey 1sts 3-1 in the trophy. The fifth team narrowly lost out to Swansea 4th's 4-3 in the plate.

Reserves Team The reserves are now top of the Wels Football League Reserve Division West outright after beating closest rivals Penybont Reserves 7-0. After 8 games the team sit top with 8 wins from 8 having scored 62 goals and conceding just 6! Youth Team After 5 Dafabet Welsh Premier Development League South games the youth team sit fourth on 11 points in a highly competitive league. With games in hand over teams above and one of only two unbeaten teams, the youth will be looking to push on in the next few weeks. Social Media Social media is the easiest way to keep up to date with all the goings on at Cardiff Met FC. We have a Facebook page and Twitter (@CardiffMetFC), where you can find post match interviews and info on upcoming games and we also have a brand new website which can be found at www.cardiffmetfc.com. @cardiffmetfc

To enquire about match sponsorship or any other sponsrship opportubnity, please contact: