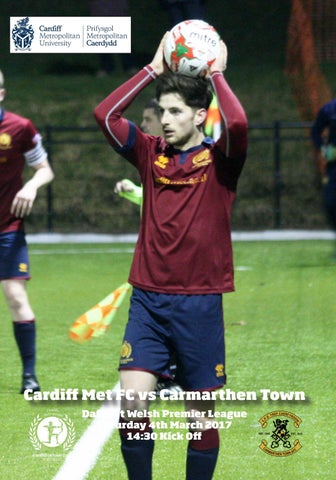 We take a look at the history of Carmarthen.

We look ahead to the 2017/18 season with an opportunity for you all!

Match photos from our recent games against Aberystwyth, TNS, Bala and Bangor.

Chairmanâ&#x20AC;&#x2122;s Welcome Firstly, I'd just like to welcome the supporters, players and management of Carmarthen Town FC to the Edstella Stadium this afternoon. Croeso cynnes. I once read a book themed on the assumption that football was a game of opposites; of defence and attack, of being in and out of possession. Although it made some sense at the time, on reflection it represented a rather binary, two-dimensional analysis. This is because football, like it or not, is a wonderful mix of the complex which, despite the continued misguided efforts of many, can't be easily fragmented. A player is not simply a player; he or she is a contributor to a much larger system and 'game'. In this respect, the whole is considerably greater than the sum of its parts. The sociologist Anthony Giddens would have claimed similar in his structuration theory which represented an attempt to give credence to both structure and agency in explaining human action. The theory goes that individuals' behaviour is both influenced by and influences social norms and expectations. Our results since 'the split' where we made the top 6 have not been pleasing, and I take no solace in fact they the losses have occurred away against 3 of the top 4 sides. We don't deal in 'hard luck' stories or the 'plucky loser' narrative. Having said that, in many ways, the performances have been improving; most of the time. And it is in that caveat where the rub lies. Since, and just before, the split we talked about trying to assert our own game a little more; an emphasis on attack rather than defence. Doing so has provided us with some of the best halves of football so far this season; witness the second against Bangor and the first against Bala. The fact that we lost both games was down to defensive frailties: ironically a great strength in our earlier games prior to the split. The point is, you can't have one without the other if a successful outcome is desired or even likely. Today, we need to return to the earlier defensive resilience (which includes all 11 players on the pitch at that time), whilst ensuring we keep building on the improved ball possession and positive assertion. Football is not a game of opposites, it's just a game, an interdependent one at that. The ancient Chinese had it about right with their complementary concepts of yin and yang; aspects which may appear opposite on first glance, but which can't to without each other to make the perfect circle. Let's hope we round things off today. Lwc dda i bawb

Todayâ&#x20AC;&#x2122;s Opponents Carmarthen FC Carmarthen FC was formed in 1948 and admitted to the Carmarthenshire Association Football League. The present ground, Richmond Park, was created in 1952. Election to the Welsh League came in 1953 with the club gaining its first honours in 1959-60 with promotion from Division 2 West to the First Division of the Welsh League. Progress was patchy in the 70's and 80's with intermittent promotion and relegation in the Welsh League Divisions until the 1995-96 season. This was the best season in the club's history with both the Welsh League title and the Cyril Rogers Cup coming to Carmarthen - a notable double. The following season 1996-97 was Carmarthen Town's first in the National League and another milestone was achieved in the 1999-2000 season when the Club were runners-up in the Welsh Senior Cup under manager Tomi Morgan who had joined the club in mid season. 2000-2001 season was Carmarthen's fifth in the League of Wales. A third position finish saw the club gain qualification for the UEFA Intertoto Cup, an honour that had been denied them on goal difference the previous season. Carmarthen hold the record for the highest European score of any Welsh team as they defeated Eircom League outfit Longford Town 5-3 on aggregate in 2005. @cardiffmetfc

The Big Interview The big interview is normally reserved for a first team player to give their thoughts on recent games and goings on. This week however we have an opportunity for you all! With the Aberystwyth result before Christmas confirming our place in the Dafabet Welsh Premier League for the 2017/18 season, work behind the scenes has begun to ensure the club is in the strongest possible position to progress and improve on our 2016/17 showing. We have many exciting opportunities to get involved with the club and ways in which local and national businesses can be linked with the Capital's only WPL side. We have a range of sponsorship packages available including pitch side banners, kit sponsorship, online and social media advertising and matchday packages. With guaranteed television exposure through weekly Sgorio highlights and live games, an academy set up with over 200 players training at Cyncoed each week, social media that reaches nearly 750,000 people a month and regular MADEinCardiff, PES17, Football Manager and Wales Online features about the club, what better way than to advertise to Cardiff, Wales and the world?! If you, your business or someone you know may be interested in partnering with Cardiff Met FC, please get in contact with dspencer@cardiffmet. ac.uk to request a media pack and to discuss options!

Opposition Analysis Mark Jones (9) Mark was born on 5 January 1989 and is yet another product of the Afan Lido youth system. He was part of the Cardiff City Academy before joining Llanelli in 2007 making just twelve starts. He made 132 WPL appearances for Port Talbot and Aberystwyth before joining Carmarthen Town in mid 2015.

Mark Aizlewood (Manager) Mark was born in Newport in October 1959. His career has been well chronicled and included time at Football League clubs Luton Town, Charlton Athletic, Leeds United, Bradford City, Bristol City and Cardiff City. Mark has 39 international caps for Wales, mainly playing in midfield, and is a qualified UEFA coach. He was appointed manager of Carmarthen Town in January 2012. .

The 1st team started the journey through BUCS National Championship knockouts with a win vs Stirling followed by a 4-3 victory over Northern champions Loughborough. Worthy mentions to our 2nd and 4th teams! The 2nd team have had a fantastic first season in Division 1 and have landed the accolade of the best university 2nd team in Britain. Our 4th team have also had a great season and secured the Division 4 title, congratulations to all staff and players!

Reserves Team Due to the recent bad weather, the reserve fixtures have become somewhat disjointed. When the team has been able to take to the field they have picked up 7 points out of a possible 9. This leaves them 4 points clear at the top. With Briton Ferry sitting in second with a game in hand, there is still a lot of work to do to ensure title success and the reserves will be doing all they can to ensure this!

Youth Team Cardiff Met Development side currently sit 5th in the Welsh Premier League South. Following a 4-3 victory over Risca United on Monday in the cup, CMU Development turn their attention to the league against Risca United and Merthyr. With four games in hand, points are vital and CMU must exploit their home advantage this weekend in order to move up the table.